On a Los Angeles Lakers team that includes Kobe Bryant, Steve Nash, Dwight Howard, Pau Gasol and Metta World Peace, it is sometimes possible to get lost in the shuffle.

But here is Robert Sacre of Vancouver, making enough of an impression as a rookie out of Gonzaga University that it looks as if he'll crack the star-studded Lakers lineup.

Sacre was the 60th and final player chosen in last summer's NBA draft, but he has been anything but Mr. Irrelevant since arriving for training camp. With Howard slowed by his recovery from off-season back surgery, the seven-foot centre has been getting big minutes in the exhibition season and, last Wednesday, started against the cross-town rivals, the Clippers.

He logged the second most court time – 34 minutes 33 seconds, behind Gasol's 35:26 – scored 13 points on a 6-for-9 shooting night and most importantly, was in the lineup when the two players he's essentially competing with for the final roster spot (guards Andrew Goudelock and Darius Johnson-Odom) were on the sideline watching.

The Lakers have 13 players on guaranteed contracts and can carry up to 15, but the suspicion is they'll make due with 14 to keep the costs down.

Given how careful the team wants to be with Howard – who played last Sunday, but sat out Wednesday as a precaution – it looks as if Sacre is in the right place at the right time with the right skill set.

Accordingly, these are heady days for the 23-year-old – getting a chance to play with and against a collection of all-stars and future Hall of Famers.

Sacre has a larger-than-life quality about him, which makes him a good fit on a Lakers team that doesn't feature many – or any – shrinking violets. Apart from the tattoos that run all the way up and down his body, the other quality that sets him apart is the perpetual smile on his face.

"It's been great, to have an experience like this," Sacre said. "Being from Vancouver, to come here, I look around, I have great players all around me. I really can't complain."

Sacre, who was born in Baton Rouge, La., comes by his athletic pedigree honestly. His mother, Leslie Sacre, attended Louisiana State University on a basketball scholarship. His father, Greg LaFleur, played tight end in the NFL for six years.

Sacre moved to Vancouver as a seven-year-old back when the Vancouver Grizzlies were still part of the NBA – "We'd just gotten Michael Bibby," he recalls – but because of his mother's LSU connection, grew up as a big fan of former Lakers centre Shaquille O'Neal.

Internationally, Sacre represented Canada at the 2006 FIBA Americas under-18 championship and in 2010, played for the senior national team at the world championship in Turkey.

According to Sacre, his parents decided it would be best for him to "to be in Vancouver – just for the culture, and everything like that."

Nash – from nearby Victoria – had just completed a splashy U.S. college career at Santa Clara when Sacre first arrived in Canada. Nash, Sacre says, helped pave the path to the NBA for him.

With only one exhibition game remaining, Lakers head coach Mike Brown is happy with what he's seen from Sacre so far. He isn't perfect, but he's learning.

"He's a big strong body and he uses it the right way," Brown said. "He tries to play within himself. At his size, with his instincts, if he does that, he can fit in with a lot of people.

"As time has gone on, he has shown a little bit more ability to do some other things. If he doesn't try to do too much, or get out of his box, then he's got a chance to make some money in this league for a long time."

Sacre, meanwhile, doesn't want to get too far ahead of himself. One day at a time, is his mantra – at least for the next few days.

"I've just got to keep doing what I'm doing, and focus on what the coaches want me to do, to be successful," he said. "And listen to my veterans.

"I have MVP players all around me and [a] two-time defensive player of the year [Howard has won the award three times]. If I listen to Dwight and those guys, I have a great opportunity to be successful. So I just focus on what they're giving me and take it and use it on the court." 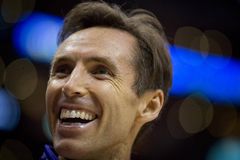