One word succinctly describes what's transpired so far in the NCAA Tournament:

But even that's probably underselling it.

A comeback for the ages by Nevada. An entire region left without a Top 4 seed in the Sweet 16 for the first time in tourney history. The 16-seed winner UMBC, falling short in its attempt to extend its historic run as underdog darlings. Oh, and defending national champion North Carolina is out, routed in its own state by Texas A&M.

And that was just on Sunday. When No. 1 seed Xavier was bounced, too.

A memorable, zany first two rounds — even by March Madness standards — set up what could be another wild two weekends in a tournament where anything can become reality.

"It's what makes March Madness special and it kills the coaches because it's so hard and you think you have a great team," Kansas State coach Bruce Weber said. "It's March Madness and you never know what's going to happen."

Before the first tipoff on Thursday, many prognosticators had deemed this tournament one of the most wide-open in recent history.

It's turned into a nutty, once-in-a-generation kind of ride.

Loyola-Chicago won two thrillers to get to the Sweet 16, making a social media star out of their 98-year-old chaplain, Sister Jean. And then the telegenic nun who provides her own scouting reports to players got overshadowed by the ultimate Cinderella team.

The UMBC Retrievers became the first No. 16 seed in the history of the men's tournament to beat a No. 1 seed, defeating Virginia in the first round Friday night.

By 20 points. Over the top overall seed and the unanimous No. 1 team in the AP poll.

The Retrievers' run came to an end on Sunday night in a 50-43 loss to ninth-seeded Kansas State, but not before tattooing a lasting imprint on American sports, drawing attention from stars of the NFL, NBA and Twitch — and love from underdogs everywhere.

"We put our name on the map. We (gave) hope to teams that come to the tournament with lower seeds," guard K.J. Maura said.

UMBC's success story contributed to the messy, unprecedentedly jumbled bracket in the South Region, where the highest-remaining seed is No. 5 Kentucky. It's the first time in tourney history that a regional semifinal will be held without a top 4 seed, according to the NCAA.

Seventh-seeded Nevada added to that by matching the second-biggest comeback in tournament history to beat No. 2 seed Cincinnati 75-73 after trailing by 22 points in the second half.

The way reigning champion North Carolina got bounced from the tournament in an 86-65 loss to Texas A&M might have been the top storyline on any other tournament day. It left coach Roy Williams with the most lopsided tournament loss of his Hall of Fame career.

It was also the second straight year the titleholder lost before the Sweet 16. And it happened in UNC-friendly territory in Charlotte, North Carolina, where the Tar Heels hadn't lost a tourney game since 1979.

"I didn't picture it ending it like this," said Williams with his players sitting nearby. "I pictured it ending with these guys having a huge smile on their face, but that's not college basketball."

WHO'S LEFT: A look at the teams and matchups for the Sweet 16 by region.

CALL IT A COMEBACK: Nevada's comeback from a 22-point deficit matched Duke's rally after beating Maryland in the 2001 Final Four. The biggest comeback belongs to BYU, which trailed by 25 points before beating Iona in the 2012 First Four.

GLASS SLIPPERS IN SOUTH: What a mess in the underdog-laden South.

"You know, just obviously we didn't think 16 was going to ... beat a 1," Weber said. "You thought it would be a little different situation, but we just said we could write history tonight. No 9 has ever beaten a 16 to go to the Sweet 16, so we wrote our own history tonight."

The Aggies manhandled North Carolina in Charlotte in surprisingly easy fashion to get to the round of 16 for the second time in three seasons. After holding a 47-36 edge on the glass, Texas A&M should scare a Michigan team that has had to slog through two victories and deliver a buzzer-beater 3 to get to the Sweet 16.

In Detroit, Syracuse tuned out the noise from a Michigan State-partisan crowd for a 55-53 win . The Orange's trademark 2-3 zone gave another unfamiliar opponent fits after holding the more talented Spartans to 26 per cent shooting.

An NCAA tourney run that started with the First Four in Dayton for Syracuse will continue against Duke in the Sweet 16 in Omaha, Nebraska.

TWO ONES ARE DONE: Two No. 1 seeds didn't make it out of the tournament's opening weekend for the first time since 2004, when Stanford and Kentucky both lost in the second round.

This time around, Virginia and Xavier were the top seeds that were bounced.

The Cavaliers went home on Friday after the historic loss to No. 16 seed UMBC. The Musketeers gave up a 12-point lead on Sunday and fell to Florida State, 75-70. It was a disappointing ending for a program that returned four starters from a team that lost in the Elite Eight last year to Gonzaga.

The only other years when two top seeds lost in the first weekend were 1981 and 2000. 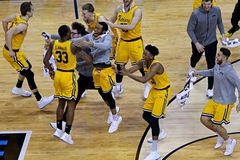