Lou Williams scored 29 points, DeMar DeRozan added 24 and the Toronto Raptors put the Miami Heat on the brink of playoff elimination with a 107-104 victory Saturday night.

Greivis Vasquez and Kyle Lowry each scored 12 points and Patrick Patterson had 11 for the Raptors, who clinched home-court advantage in the first round of the playoffs.

Dwyane Wade scored 30 points for the Heat, who can only get to 37 wins — the number that Brooklyn and Boston are already at, putting them in the No. 7 and No. 8 spots in the Eastern Conference race. Goran Dragic scored 22 points for Miami and Hassan Whiteside finished with 16 points and 18 rebounds.

Williams hit a 3-pointer with 31.2 seconds left to put the Raptors up by five, and that just about sealed not just the game but Miami's playoff fate. The Heat must win their last two games, and get a ton of help to reach the post-season for the seventh straight year.

It was Toronto's first road win over the Heat since Nov. 19, 2008, ending a 10-game slide on Miami's home floor. The win was Toronto's 48th of the season and 22nd on the road, both tying franchise records.

The teams were tied at 58 at the break, with Williams doing what he does as well as just about anyone — coming off the bench and giving the Raptors a spark.

Toronto had 31 points in the second quarter, and Williams had 17 of them. He made five of six shots from the field and all five of his tries from the line in a span of just over 9 minutes. Whiteside and Wade did their part to keep Miami in it, combining for 15 in the quarter.

Wade stayed hot in the third, scoring 11 more — highlighted by one stretch where he managed to get a rebound as he was stretched out on the court after a collision, and then a drive not long afterward where he got knocked down again.

Raptors: Williams had never scored 17 in a first, second or third quarter. He'd scored at least that many in a fourth quarter five times. ... Tyler Hansbrough had his nose bloodied midway through the first quarter, taking an inadvertent hit from Wade on a drive near the basket. He stayed in the game. ... Before last season, the Raptors had never finished with a winning road record. They've now done it in each of the past two seasons.

Heat: Dragic had 12 points in the first quarter, matching his best opening quarter since coming to the Heat. ... Whiteside had 12 points and 11 rebounds by halftime, the third time this season he's had a double-double before intermission. ... With his first assist, the 1,981st of his Heat career, Mario Chalmers broke a tie with LeBron James for third on Miami's all-time list in that department.

The Raptors were without Amir Johnson (sprained right ankle) for a fourth straight game, and coach Dwane Casey said he's hopeful of getting him back for one game before the playoffs start next weekend. Miami had Henry Walker (elbow) available, but he did not play.

Whiteside became the third player this season to miss at least 12 free throws in a game. DeAndre Jordan of the Los Angeles Clippers has done it four times, and Houston's Josh Smith missed 14 in Friday's loss to San Antonio.

Raptors: At Boston on Tuesday night. 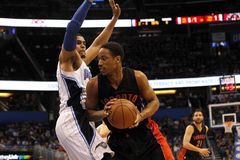 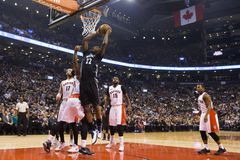 With playoffs in sight, Raptors refocus on defence
April 6, 2015 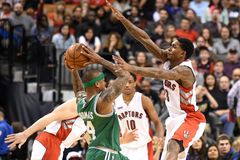