Kyle Lowry kept punching, even as the Cleveland Cavaliers appeared in the driver's seat just minutes from fulfilling the destiny many had prewritten for them before the season began.

Despite a 35-point performance from their all-star point guard, the Toronto Raptors's historic season ended Friday night with a Game 6 113-87 loss to the Cavaliers in the team's first run to the Eastern Conference final.

The Cavs came to Toronto toting a 4-0 record in road closeout games over the past two seasons. Appearing in his 11th postseason and his 36th playoff series, LeBron James had been in the position of holding a 3-2 lead over his opponent nine times before. He had won eight of those. James finished with 33 points, and Kyrie Irving added 30 – as the Cavs closed out the series to advance to their second straight NBA Finals.

"[James] knows, he understands, plus, he's got the ability to do something about it," said Toronto coach Dwane Casey before the game. "I remember going against [Michael] Jordan in '96. He has that same type of mindset, that razor-like focus that you've got to fight against and you've got to overcome. That's the level that you've got to reach to beat them – his level – because they're going the way he goes."

Kevin Love, who struggled from the field early in the series, had absolutely erupted with a 25-point performance in Game 5. The Cavs' power forward nailed his first three-pointer Friday night, opening the gates for a prolific night for Cleveland from beyond the arc.

James was aggressive off the hop – manufacturing a steal and breaking in alongside Irving for a breezy layup. The two rolled in off another steal again four minutes later, but this time it culminated in an explosive King James alley-oop dunk. The Cavs superstar made his first four attempts of the night.

James had 14 points in the first quarter, while Love had seven, and the Cavs had already shot five three-pointers, taking a 31-25 lead into the second.

Bismack Biyombo was called for a very questionable flagrant foul for elbowing Love. It followed video review and a deafening surge of jeers from the Air Canada Centre crowd. He would have faced a one-game suspension for exceeding the postseason flagrant foul limit – rendering him unavailable for a Game 7, had it been needed.

A big skirmish followed inside the second quarter, shortly after a very physical Jonas Valanciunas entered the game for Toronto – two games into his return from an ankle injury. The Raps seven-footer tangled with Cleveland's Richard Jefferson, the two getting nose-to-nose while teammates circled. Technical fouls were assessed to Valanciunas, Jefferson and Patrick Patterson.

James had several more megastar moments in the second. His deep three-point dagger hit nothing but net. He made DeMarre Carroll bite on a three-point fake, then sped around him and rocketed up to dunk the ball over Biyombo.

James had 21 points by halftime, including a trio from three-point land.

James was held to just four points in the third quarter as the Raps outscored them in the stanza 33-31. Instead it was Lowry playing the role of superstar – exploding for an 18-point third quarter, 12 of them in just 95 seconds of play.

Cleveland had been up by 21 earlier in the third, but led 86-74 going into the fourth.

The Raptors scrapped with everything they had in the late going, but faded down the stretch. DeMar DeRozan had a 20 point night, but Toronto got little from the rest of the team. Patterson had nine points, while Biyombo had just four points and Carroll added seven.

"Cleveland has been there before," said Casey earlier. "They understand the moment, and I think we're getting better at it, too."

Raptors say players' late-night visit to casino not a factor in Game 5 loss
May 26, 2016 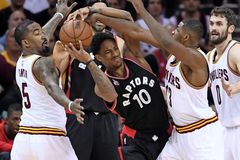