The Toronto Raptors calmly put on red t-shirts that read "Atlantic Claimed," stepped out from under the dark cloud for an evening and celebrated something concrete.

Early Friday night, it appeared that the Raptors – losers of three in their past four – were about to drop another to the Los Angeles Lakers, a squad second to last in the Western Conference and way out of the playoff picture. Yet, despite trailing for much of the first half, the Raptors won 94-83, led by 19 points from Jonas Valanciunas, 18 from Lou Williams and 17 from James Johnson. With the victory, Toronto clinched the Atlantic Division title for the second consecutive year.

The win lifted a little of the dark cloud that has hovered over the team recently. It was playing yet another game without all-star Kyle Lowry, as he still struggles with that back injury suffered on March 18. Two days earlier, it let a victory fall through their fingers by allowing the Chicago Bulls to score 39 points in the final quarter. The Raptors entered Friday's game ranked 23rd in the league in points allowed, with 101.5 a game. A game with just 83 points allowed – albeit to a team with a 19-52 record – was a baby step.

"All we need is something to get us going and put us back in the right mood," said DeMar DeRozan, who reminisced a little about his early days with the team, when they repeatedly missed the post season. "Knowing we clinched the division, this could be the thing that pushes us over the hump and give us what we need to get our swagger back again, that's all it is. Once we get back on track, we're going to be right back where we left off."

Last year, the Raptors were 28-24 before the all-star break and a poignant 20-10 after it, picking up natural momentum as they rolled into the playoffs for the first time in six years. Back then, they had sported "Atlantic Is Ours" T-shirts after clinching the division and wasted little time raising the banner to the rafters.

This season, they began with lots of home games and opponents with poor records and rolled to a 36-17 start. But they have gone a troubling 7-13 since the break. The descent began earlier though, throughout a 9-7 January, then a 4-7 February.

Already eliminated from the playoff picture and without injured stars including Kobe Bryant, the Lakers trotted out a lineup most in the building wouldn't recognize, aside from Jeremy Lin, or maybe breakout rookie Jordan Clarkson.

Yet, in the first quarter, the Raptors were the team that looked like they were coasting out the end of a lottery season. The Lakers were playing inspired, trotting out to a 24-17 lead behind 10 smooth first-quarter points from Lin.

Men from the original founding group of the Raptors franchise were honoured early in the game, and the ovation for them provided some of the only meaningful applause of the early evening.

It wasn't until the three-minute mark of the second quarter that the Raptors finally grabbed the lead. The Raptors rallied inside the third quarter, as Terrence Ross – who went without a point in the first half – dumped in the only 10 points he would score in the game, and it propelled them into the lead, and they held it.

DeMar DeRozan was just 1-of-10 shooting for Toronto for six points, but had 10 rebounds and seven assists. Lin was L.A.'s top scorer with 18, while Clarkson provided 14.

"We had three goals – to make the playoffs, win the division and continue on in the playoffs," said Toronto coach Dwane Casey. "We're not doing it the conventional way right now, and tonight was a good start defensively, clamping down the way we did, but we've got to make it a habit."

The Raptors have nine games left on the schedule, the next one at home Monday against the Houston Rockets. 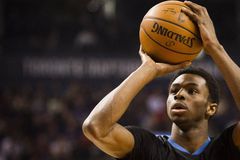 Despite yet another loss to Bulls, Raptors clinch playoff spot
March 25, 2015 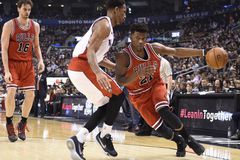 Pursuing perfection: Are the Kentucky Wildcats the greatest NCAA team ever?
March 27, 2015 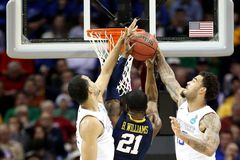