It is almost unfair competition when you consider that DeMarcus Cousins is 6 foot 11 and 270 pounds while his front-court partner on the New Orleans Pelicans, Anthony Davis, is 6 foot 10 and a relatively svelte 253.

Not only are these two big and powerful basketball players but they can also run and shoot – even the three-ball from the outside, which makes trying to defend these resourceful giants a herculean task.

If they stand side by side and extend their arms, their pterodactyl-like wingspan roughly covers a combined 14 feet, which is a considerable barrier to have to try to penetrate for an opponent attacking the rim in an NBA game.

This was the mission facing the Toronto Raptors at Air Canada Centre on Thursday night, how to best contain these two beasts.

The Raptors (7-4) did not do a bad job in that regard and, despite just a nodding acknowledgement to their defensive duties, the end result was a tense 122-118 victory to record their second win in a row. The Pelicans fell to 6-6.

With the scored deadlocked 92-92 heading into the fourth quarter, the Raptors kept their nose in the mix, fighting back from a four-point disadvantage to take a 114-109 lead on a corner three by Serge Ibaka with just more than two minutes left.

Jonas Valanciunas did a good job collecting his own rebound after a miss to feed the ball to Ibaka on the play.

With the lead cut to 116-114 on a basket by Jameer Nelson, Toronto iced the victory when DeMar DeRozan drained a 16-footer to restore the four-point bulge with just more than 32 seconds left.

While he was happy with the outcome, Toronto coach Dwane Casey was miffed at Toronto's overall lackadaisical approach to defence, allowing New Orleans to connect on 53.7 per cent (44 of 82) of their shots, including a healthy 41.9 per cent clip (13 of 31) from three.

"We can't survive playing defence like that," Casey said. "Again, the game is changing, the three point [shot] – it's a scoring game. You've got to be able to score.

"But also, too, have some semblance to defence, and we didn't."

DeRozan finished with 33 points and eight assists to lead Toronto.

Cousins had 20 points and 15 assists while Davis countered with 18 and seven.

But it was guard Jrue Holiday who was the most dangerous offensive weapon for New Orleans, finishing with a game-high 34 points and 11 helpers.

While the rest of the NBA is trying to emulate the Golden State Warriors and adopt a long-range attack instigated by eagle-eyed guards with a shoot-first, ask-questions-later mentality, the Pelicans are a bit of a throwback.

Not since the likes of Tim Duncan and David Robinson roamed the hardwood for the San Antonio Spurs has the NBA seen a team rely so heavily on its front end to carry an offence.

Not surprisingly for a team that features such a tall front line, the Pelicans entered Thursday's game ranked No. 2 in the NBA in points-in-the-paint scoring a game with a 51.3 average down low.

And New Orleans seems to be adapting to life with the big top, having won four successive road games heading into the Toronto tilt, its best such run in six years.

"It's incredible when you think about your centre and power forward going out there, doing the things that they're capable of doing," DeRozan said heading into the game.

"It's going to be a collective thing … to guard both of them, try to cut off a lot of the things that they do."

"That's the only way you can stop them," added Ibaka, the starting Toronto power forward who along with centre Valanciunas knew they would be in store for a tough, physical battle trying to contain Cousins and Davis.

Cousins displayed his skills early for the sold-out crowd at the ACC, stepping back behind the arch and then launching a successful three that cut an early Toronto first-quarter lead to 12-10.

Moments later, the big man nimbly attacked the Raptors' basket on the dribble, sweeping past Ibaka as though he were a pylon and then finishing with a layup that knotted the score 12-12.

After leading by as many as 10 the Raptors needed a 19-foot turnaround jumper by DeRozan with 1.1 seconds left on the clock to secure a 34-32 advantage.

Led by 11 points by Dante Cunningham, the Pelicans raced back in the third quarter to pull into a 92-92 tie.

The Raptors extended their lead to 66-60 by the half, a second quarter in which Cousins began to unravel somewhat from all the attention the Raptors were paying to him.

After absorbing his third foul of the frame and perched on the bench, Cousins was then tagged with a technical foul for yapping at one of the officials. 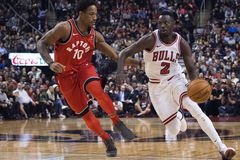 Casey can’t bounce Raptors out of fatigue as Toronto loses to Washington
November 5, 2017 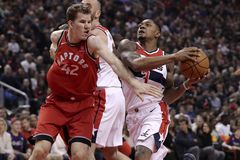 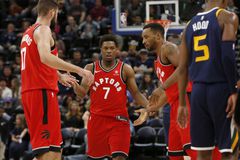