Newly minted chief executive officer Tim Leiweke has revamped the senior leadership of the Toronto Raptors by allowing Bryan Colangelo to remain as president of the NBA team while stripping him of his duties as general manager.

His next task is the rebranding of the Raptors in an effort to increase the team's popularity, not only in Toronto but across Canada.

Leiweke was only hired as the new face of Maple Leaf Sports & Entertainment, which owns the Raptors, in April and doesn't even take up his new job until early next month.

But as he prepares to make the move full-time to Toronto after running Anschutz Entertainment Group in Los Angeles for the last 17 years, Leiweke said he has already determined that the Raptors have missed a great opportunity to better market itself in this country.

"The one thing that is clear to me is, when I look at the [Toronto] Blue Jays I have great respect for the fact that all of Canada follows the Blue Jays," Leiweke said. "It's not the same with the Raptors, and I get that. We are Toronto's team, but I think we have to learn to be Canada's team."

Leiweke, who was speaking to reporters during a telephone conference call Tuesday morning after MSLE announced the executive changes to the basketball club, said that conversations about rebranding the Raptors are only in the infant stages.

Things are still being flushed out, both within the company and with the NBA, but Leiweke suggested that Colangelo will play a major role in helping to revamp the corporate vision of the basketball team.

Leiweke said that MLSE has already made one big decision – to make a bid to host the 2016 NBA all-star game, which would coincide with the Raptors' 20th anniversary in the league.

"Clearly the 2016 all-star game is a flag in the sand that we've planted with the NBA," Leiweke said. "It is a must-have, in my opinion, and it will be at the centrepiece of how we rebrand this.

"The change is going to be this: Toronto's not bidding on the 2016 all-star game. Canada is. And that's where we'll begin the change."

Leiweke also said the club will look into building a new practice facility for the team in an effort to make the Raptors a more desirable destination for NBA players. At the moment the Raptors utilize a cramped practice court on the third floor of the Air Canada Centre, where they play their home games.

Of more immediate concern is the on-court fortunes of the team, which missed the playoffs for the fifth consecutive season this year, stumbling to a 34-48 record under second-year coach Dwane Casey.

"There's accountability here," Leiweke said. "And we need a new set of eyes and a new thinking towards how we from a basketball standpoint go forward.

"So the decision was made to try to get the best of both worlds if at all humanly possible. We want to keep Bryan as the president. He will be involved in a lot of things that will become a priority for the Raptors going forward."

While he will be used as a sounding board, Colangelo will no longer have final say on the day-to-day operations of the basketball team, which will now fall to the new GM, who will have total autonomy and report directly to Leiweke.

Leiweke said that it will not be easy move for Colangelo, who he said was initially "ticked off" when he first learned of the changes being proposed.

"Bryan's going to have to occasionally take a deep breath and understand now that a GM is going to have direct report and final say on all basketball decisions," Leiweke said. "And he's going to have to live with that. And I hope he can because if he can't I'm fairly certain we're not going to fire the Toronto Raptors."

Leiweke said he is spearheading the search for a new GM, which he hopes to have in place within a month or so.

Current Denver Nuggets GM Masai Ujiri is believed to have the inside track for the job. Ed Stefanski, the Raptors' executive vice-president of basketball operations, will also get a close look, according to Leiweke.

Leiweke said the new GM will be making the call as to Casey's future with the team and those of his assistants.

Next Raptors GM a mystery as Colangelo gets bounced
May 20, 2013 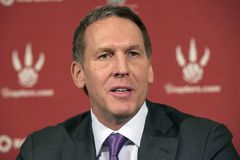