The reigning NBA champion Golden State Warriors will visit Toronto's Air Canada Centre on Saturday toting the NBA's first 20-0 record, but in the midst of a treacherous part of their schedule.

They are the led by superstar Steph Curry, who is averaging an NBA-best 32 points a game. His squad is scoring 115.3 points a game and outscoring its opponents by 15.4 points a night.

They'll meet a 12-8 Atlantic Division-leading Toronto Raptors team coming off an embarrassing loss to the Denver Nuggets, dwellers at the bottom of the Northwest Division. Still, it could be a considered a prime time to face the champs.

The Warriors are two games into a seven-game trip that spans 13 days – their lengthiest stint away from home so far this season. They began the trip with a win in Salt Lake City over the Utah Jazz, then headed east for a victory in Charlotte. Then, it is north to Toronto, southeast to Brooklyn, west to Indiana, east to Boston and back west to Milwaukee, nearly two weeks of tripping over time zones and trying to balance that perfect record.

The Raptors nearly pulled off an upset when they visited the Warriors in Oakland last month. Golden State held a commanding 63-47 lead with a ludicrously good second quarter, but the Raptors fought back behind a 28-point night from Kyle Lowry. Curry went into that game averaging 27.9 points and 8.5 assists in his career against Toronto – his best mark against any team in the league. He scored 37 points with nine assists that night, helping Golden State hang on for the 115-110 win.

Toronto is working with different rotations, coping without starting centre Jonas Valanciunas. The Raptors have started poorly recently, and have had to rely on late-game heroics from players such as Lowry.

"Teams are coming out aggressive and we're just not matching their intensity," a perplexed Lowry said after the loss to Denver, unable to put his finger on a reason.

Toronto coach Dwane Casey waved his arm wildly up and down in a roller coaster-like motion as he tried to describe his team's recent play.

"We've got to find a level of play that we decide we're going to play at from the beginning of the game to the end of the game, and we can't wait until we get our teeth kicked in to start to play," Casey said. "That's been our M.O. So, whether we change the starting unit or the rotation to get a jump-start, then we've got to do something, because there have been too many games in a row now where we dig ourselves a hole, no matter who it is, and we have to dig out. That's just too hard."

Many NBA analysts have identified this road trip as the likely end of Golden State's streak. The Raptors – led by Lowry's recent instances of all-star-calibre performances – are among the teams (along with the Indiana Pacers) that may be positioned to hand Golden State that first loss.

Casey was in no mood to talk about Golden State when he last met the media after Thursday's loss to Denver.

"That's what bothers me – everyone is talking about Golden State," Casey said when asked how his team will respond to the Warriors. "[The Nuggets had their] backs against the wall, a wounded animal coming into our house and we didn't respond. Same with Phoenix the other night – they were wounded and came in and outworked us in our house, and that's embarrassing for that to happen."

"Golden State is a great team, but what are we going to do? Let them come into our house and attack us on our home court?" Casey said. "We'll see what we're made of." 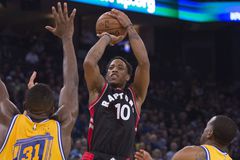 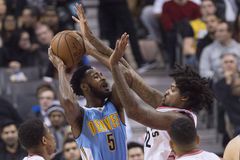 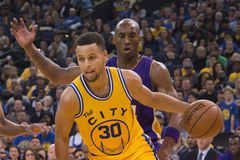