Amanda Joaquim remembers eagerly reading through a job posting for a physiotherapist with the Toronto Raptors, mentally checking off each of the required qualifications.

The posting seemed to describe her skills and clinical experience perfectly. Working with NBA players sounded like a dream job to the physiotherapist who had played sports all her life and built a career treating athletes of all ages. Confident in her qualifications, she didn't hesitate to apply. But she was curious how the team might feel about a woman doing this job.

"I didn't know what it was like inside the team, so I wondered what the culture might be and if gender might play a role in getting the job or not," Joaquim said. "I'm a small woman, and I would be working with very big guys."

Alex McKechnie, the Raptors director of sports science, conducted a lengthy search for a physiotherapist with specific expertise and was inundated with high-quality candidates. Joaquim stood out. The Whitby, Ont., native, had treated a wide array of people, including many players from a junior football team, the Oshawa Hawkeyes. The Raptors needed someone who could add insights to the medical staff and interact with players on a daily basis, in Toronto and on the road.

"I had to find someone who would be comfortable working in our locker room and could earn the players' trust," McKechnie said. "Personality-wise, Amanda came in and filled the room. She was without question the best candidate."

While Joaquim is one of the most recently hired women, she's not the only one working for the Raptors. There are 11 women working for Toronto or its affiliate, Raptors 905. Others work in basketball operations, player development, coaching, analytics, team services, community relations, nutrition and communications. There's also a female radio play-by-play broadcaster calling 905 games.

Joaquim first joined the Raptors at Summer League in Las Vegas and was introduced to many staffers for the first time during a team dinner. She had assumed a critical role: to help prevent Raptors players from missing games because of injury.

"I knew I would be comfortable in the treatment room – I'm in my element working hands-on with athletes," said Joaquim on a game night at the Air Canada Centre, after putting several Raptors through pregame exercises. "But I was surprised at how welcoming everyone was. There's a real emphasis here on respect and family and inclusion."

The Raptors advocate for hiring women and hope to see more of it in the world of professional sports. Recently, the Raptors, along with Maple Leaf Sports and Entertainment, held the first in what it hopes will be a series of speaking events hosted by the team's female leaders. The event highlighted the careers of the women and encouraged more women to consider sports jobs, and more sport organizations to hire them. Informally dubbed "She the North," the event had hundreds in the audience.

Joaquim was one of several panelists that night. Raptors president Masai Ujiri spoke, too. He called it one of his proudest moments on the job and said he wished to see a female general manager in the NBA some day, hoping that women would come from within the Raptors organization.

It's hard to compare the number of women in Toronto's organization to those at other NBA teams since many different staff structures exist across the league, with some clubs sharing staff among various teams or venues, or hiring consultants. But the Raptors are one of the NBA's most progressive when it comes to hiring women.

However, every year the Institute for Diversity and Ethics in Sport at the University of Central Florida conducts a diversity study called the Lapchick Report on many pro-sports leagues. It shows that women are nowhere near being equally represented in jobs with the NBA or its teams – but the NBA leads other men's pro sports leagues.

When the Raptors hired Ujiri in 2013, there was only one woman working day-to-day with the team staff, team-services manager Doreen Doyle.

That number has risen in the years since, especially this season. Several women were recently added, including Joaquim, Brittni Donaldson in basketball analytics, and Jennifer Quinn as the new director of communications, the head liaison connecting players and coaches with the media every day.

"Now we have 11 women here, and that's unique and I'm proud of that," Ujiri told The Globe and Mail in an interview at his office last week. "We didn't pick them because they are women; they all had exceptional stories and qualifications that brought them here. Yes, we are noticing that our candidate pool is diversifying, and that has a lot to do with Toronto, a great metropolitan city. I hope it translates into a great culture and a winning team on the court."

Several female employees sat for an interview with The Globe in the dining room of the Raps' practice facility, enjoying a lunch prepared by the team chef. Among them was the vice-president of basketball operations and player development, Teresa Resch, the first person Ujiri had called with a job offer after the Raptors hired him in 2013.

The native of Lakefield, Minn., played college volleyball, got an MBA and interned with Disney's ESPN Wide World of Sports, the Miami Heat and the Orange Bowl committee before working at the NBA office, and as senior operating manager for the popular Ultimate Hoops program across Life Time fitness clubs. Ujiri had worked with Resch on the NBA's Basketball Without Borders program.

Today, her role is essentially that of Ujiri's chief of staff, acting as the liaison between the Raptors and MLSE and ensuring everyone has the resources they need. She was key in bringing the new practice facility to life. "These days, almost anything our players, coaches or front-office staff are doing, they're almost always interacting with women, and there is a lot of diversity of thought here," Resch said. "We're trying to build a network of people supporting diversity and inclusion and create advocates for the advancement of women. To do that, you need to tell the stories of the impact those women are making."

Shelby Weaver was another woman around the lunch table. The Halifax native began as an administrative assistant at MLSE in 2011 and pitched in on big Raptors projects. Her natural communication with players was a big reason why Ujiri asked her to be the first manager of basketball operations for Raptors 905 in 2015, then promoted her to a player-development role with the Raptors this season.

Donaldson, recently hired for the Raps' analytics team, said many are surprised when they hear about her job. The native of Sioux City, Iowa, studied actuarial science and played college basketball at the University of Northern Iowa before working with sports stats for data provider Stats LLC.

"I can remember one player at first actually saying, 'Analytics? But you're a girl?' and then quickly it was like, 'okay, that's different, but that's cool,'" Donaldson said. "Once I was able to establish that I have a foundation in this, that I can talk basketball, that I belong here, the players and coaches have been great with me. I've recently had some young women approach me and say, 'Wow I have an actuarial-science degree too, and I had no idea a job like this existed.'"

Later that night, a number of Raptors staffers made the trip to Mississauga for the 905 home opener, where there were also women on the training and coaching staffs.

On the team bench, 905 assistant coach Nicki Gross sat directly to the left of head coach Jerry Stackhouse. The multisport athlete from Emerson, N.J., played college soccer at Seton Hall, and managed the men's basketball team while getting her MBA at Monmouth University. She interned at NBA Summer League and worked for the G-League Iowa Energy before Stackhouse hired her last year. Aside from using a different dressing room to change from her warmup athletic clothing to her game-time business attire, she says her gender has no impact on her job.

"I want to coach in the NBA one day, but I'm in no rush because I love working for Stack and I'm learning so much because he's got me playing so many different roles here," said Gross in the back hallways of the Hershey Centre after the game. "I'm learning from an NBA all-star every day who is smart as hell with the Xs and Os."

On any given day at a Raptors or 905 practice or game, several women are watching from sidelines, stands or through the glass of their offices.

"It works for our team; it's refreshing to have women around and it's not weird; I don't really think of it as a thing at all," said Raptors guard Fred Van Vleet. "This is my first NBA team, so it's all I've ever known in the league. We're a very diverse organization – men, women, players from many different countries with different points of view. It makes for a special place."

Another She The North event is slated for January when the organization plays host to the G-League Showcase, a notable scouting event for NBA teams.

"It's a copycat league, and I hope everyone copies what we're doing with those events," Ujiri said. "I want our women to be exposed, for people to know the work they do. I hesitate to advertise them too much because I don't want people to come and take them away from us, but these women are tough, and I'm ready to go to war with them."

She The North: Ujiri says Raptors have benefited from hiring more women
November 10, 2017 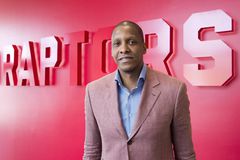 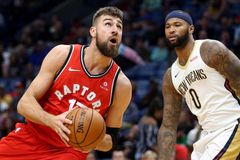 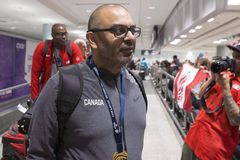