Toronto Raptors general manager Masai Ujiri has taken the first step toward punching his ticket to the NBA draft lottery.

But he also gave DeMar DeRozan, and maybe even Jonas Valanciunas, some room to breathe – not an entirely bad thing considering they are perhaps the only two players close to being of long-term consequence on a roster without a clear untouchable.

On Monday, the NBA signed off on the seven-player trade that sent Rudy Gay, Aaron Gray and Quincy Acy to the Sacramento Kings. All that's left now is ditching point guard Kyle Lowry and it will be all systems go: The Raptors will be as fully engaged as any number of NBA teams in positioning themselves for a chance at Canadian-born Andrew Wiggins or any of the other top U.S. college players in a deep, deep draft.

"I couldn't tell you where the team will go from here," Ujiri said Monday, retracing his steps later and noting: "One thing I can say is we won't be stuck in the middle; we won't be in no-man's land."

That certainly sounds like a guy ready to pull out all stops, doesn't it? In return for Gay, Ujiri received four players of whom only one – fourth-year guard Greivis Vasquez – has even the slightest chance of figuring in future plans.

Gay was part of a last-gasp effort by Ujiri's predecessor, Bryan Colangelo, to save his job. When he completed the three-team deal with the Memphis Grizzlies and Detroit Pistons mid-way through the 2012-13 season, Colangelo told everybody that Gay was the type of offensive player who could give the Raptors – a gelatinous glob void of personality that was all too-often bullied by NBA officials – a bit of a court presence.

There is no worry, the GM said, about, "Is he opting out? Or opting in?"

Beyond the financial constraints of his contract, Gay had become an impediment to even the most modest of Raptors goals in 2013-14.

In Ujiri's perfect world, Dwane Casey stays around all year as head coach and helps the core of this team – DeRozan, Valanciunas and maybe Terrence Ross and Amir Johnson – develop some kind of bite defensively. At the same time, DeRozan and Valanciunas grow into their games offensively.

Removing Gay – the Place Where Ball Movement Goes to Die – will make DeRozan the rightful first choice. It is to be hoped now Lowry, or whoever else takes over the point, makes a deliberate attempt to get Valanciunas engaged, too.

"He and DeMar … some people will say they are the same kind of player," Ujiri said. "It just didn't work out. Coach [Casey] tried to get spacing on the floor … but everybody saw there was no synch. Our team had to be changed. This isn't a bad patch; there were chemistry issues on the court."

The trade gives the Raptors financial flexibility. It also rids the team of a player who, in one 24-hour period last month, banned statistics sheets from the locker room – a whole cottage industry of hoops analytics has grown up around what a sinkhole Gay has become – then threw away a chance at a game-tying basket against a gassed Brooklyn Nets team by passing to Johnson for a desperation three-point shot. Gay was given three options; he picked the fourth.

This time, Ujiri did the choosing for him – and in the process, signalled a retreat into the land of the lottery. 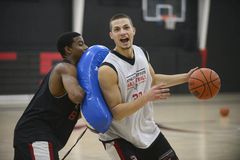 MacLeod: Rudy Gay trade seen as clearing the deck for Andrew Wiggins
December 9, 2013
Follow us on Twitter @globe_sports Opens in a new window
Report an error Editorial code of conduct
Due to technical reasons, we have temporarily removed commenting from our articles. We hope to have this fixed soon. Thank you for your patience. If you are looking to give feedback on our new site, please send it along to feedback@globeandmail.com. If you want to write a letter to the editor, please forward to letters@globeandmail.com.
Comments