From Russell Westbrook to DeMar DeRozan and Jerry Stackhouse, Toronto Raptors rookie Norman Powell has had an all-star cast of NBA guards who've taken him under their wings.

The Raptors' second-round pick from the 2015 draft has been thrust into a starting role during the prolonged absence of the injured DeMarre Carroll. Powell, who attended UCLA, was chosen for his tenacious defence, and over the course of his first season he's also shown some offensive talent, too.

It's rare for a rookie to play heavy minutes for a playoff contender, but this 22-year-old has run with the opportunity. He has learned from each of his mentors, and has made good use of their guidance. First there was Westbrook, today a star point guard for the Oklahoma City Thunder. Powell, who grew up in San Diego, watched Westbrook guide UCLA to NCAA Final Fours in 2007 and '08.

So when Powell began at UCLA himself, he jumped at the chance to talk to Westbrook whenever the then-NBA player returned to his alma mater to visit or work out with the Bruins during summers.

"I always picked his brain and I tried to model my game after his – like his energy, athleticism, his mid-range pull-ups and how he puts pressure on the rim," Powell said. "We used to have tough matchups in the summers – I always guarded him. I counted his dribbles and studied all his movements."

He adopted Westbrook's chip-on-the-shoulder style. Powell played as a true freshman at UCLA and stayed four years, being named first-team All-Pac-12 as a senior.

"Last season, Norman always drew the toughest assignments defensively," UCLA coach Steve Alford said in an e-mail interview. "We knew when the opportunity would present itself [in the NBA], Norman would be ready. He does a great job of preparing for the moment."

NBA scouts saw highlight clips of Powell guarding some of the best in college basketball, players destined for the NBA such as Allen Crabbe, Stanley Johnson and Rondae Hollis-Jefferson.

The Raptors drafted him 46th over all last June, with the second-round pick acquired from the Milwaukee Bucks in exchange for Greivis Vasquez. Powell was thrilled to be joining a Raptors squad that starred a player he had idolized as a youngster.

"DeMar, I grew up watching him in California – I can remember watching him jump over players in high school and dunk over them," said Powell, who watched DeRozan at California Interscholastic Federation games and at the other local collegiate powerhouse, USC. "He was one of my favourite players, so when I got here to Toronto, I started to pick his brain, learn how he got here, and began working out with him. We both like to prove people wrong."

Powell just made his 15th start for the Raptors, versus the Thunder. He tallied a career-high 18 points, including four three-pointers, along with four rebounds and two blocked shots. But he had the humbling task of guarding Westbrook, who finished with 26 points, 12 assists and 11 rebounds.

Powell has had more than 15 points in three straight games now, and while he still makes rookie mistakes, he keeps improving and gaining more responsibilities. Coach Dwane Casey has often complimented the youngster's mature defence by saying he's "playing like an old man."

Powell has been working individually with Stackhouse, a veteran of 19 NBA seasons who is now a Raptors assistant coach. Stackhouse tells him to stop shooting floaters and instead be an attacker – driving, drawing contact and dunking. Powell looks up to the man who he said used to torch his Lakers as a player. And they have a similarly edgy mentality.

"He was a second-round pick, but he felt like he should have been a first-round pick, and that's been a great motivation for him," Stackhouse said. "But the value he's getting here, being on a great team as a rookie – that's rare. Some guys love to be a lottery pick and play a lot right away, but how about going to a good team and really learning from veteran guys? Norm has become a guy the coaches really believe in."

Westbrook and Durant help Thunder down Raptors
May 16, 2018 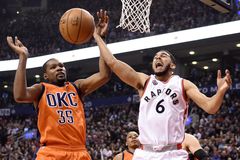 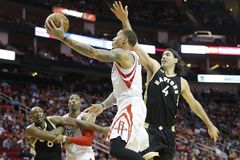