Amid an avalanche of blockbuster deals on NBA Trade Deadline Day, the Toronto Raptors made a minor move, ending the Bruno Caboclo experiment nearly four years after they drafted the raw prospect.

The Raptors traded the 22-year-old Brazilian to the Sacramento Kings on Thursday in return for Malachi Richardson, a guard on assignment with the NBA G-League's Reno Bighorns.

The youngster's name had already been scraped from his stall in the Raptors' locker room by the time the team toppled the New York Knicks 113-88 Thursday night.

The Raps had drafted Caboclo 20th overall in 2014, causing every reporter in Toronto's press room to scramble for info on the little-known 18-year-old from Sao Paulo. The pick was so off-board, it caused ESPN college basketball expert Fran Fraschilla to proclaim "he's two years away from being two years away" – a phrase that would long stick to the youngster.

The Raptors called 6-foot-9 Caboclo an athletic phenomenon, raving about this wingspan and his potential, saying they had the patience it would take to develop him.

The raw, soft-spoken small forward appeared in just 25 games for the Raptors over 3 1/2 seasons – just two of those this year. He spent most of his time developing in the G-League, averaging 12.5 points, six rebounds and 1.3 assists per game. Fans only saw him in a suit on the end of the Raptors bench, or playing down the road in Mississauga's Hershey Centre for Raptors 905.

Still, Caboclo became a sort of fascination for many Raptors fans. A chorus of "Bruno" would sometimes be chanted in late-game blow-outs if the young South American was in uniform, the fans hoping to persuade the Raps to sub him in so they could get a glimpse of him against NBA talent.

The trade appears to have been motivated by money – it saves the Raptors a little under $1-million in cap space. It also ends the curiosity over whether the Raps could take an intriguing prospect and build him into a player with impact.

Richardson, the 22-year-old player Toronto receives, was taken 22nd overall by Sacramento in 2016 after one season at Syracuse. The 6-foot-6, 205-pound shooting guard has appeared in 47 games in his two seasons on the Kings roster, including four starts. He's averaged 18 points per game in 17 appearances with the Bighorns during that time.

The Raps' trade was eclipsed by other monster NBA deals on Thursday, headlined by a surprising purge of veterans orchestrated by the struggling Cleveland Cavaliers. The reigning Eastern Conference champs shed Isaiah Thomas, Channing Frye, Jae Crowder, Derrick Rose, Dwyane Wade and Iman Shumpert. They gained George Hill, Rodney Hood, Larry Nance Jr. and Jordan Clarkson. Just as the Cavs were slipping further away from Boston and Toronto atop the East standings, LeBron James and the Cavs may have made the reboot needed to right the ship and make a deep playoff run.

"Interesting. They changed almost half their roster. So we'll see," was the brief reaction from Toronto coach Dwane Casey, when asked about the Cavs before his team tipped off with the Knicks.

The Raptors otherwise stood pat at the trade deadline, despite buzz among NBA pundits that Los Angeles Clippers big man DeAndre Jordan might have been a good fit on a Raptors squad trying to take the next step in the playoffs.

"I mean, help ain't even a thought now," said DeMar DeRozan, who last year had said publicly before the deadline that the Raptors needed help. "Last year we threw that out there but now we don't sit up here thinking we need help or something like that. It's all about us just being consistent. We've been showing that and we have what we have for a reason. We still have a long way to go to continue to get better."

The Raps crushed the Knicks in a game that felt muted after a stimulating day of non-stop action on the NBA trade wires.

Jonas Valanciunas led the way for Toronto with yet another double-double – 10 rebounds and 18 points – including two three-pointers. It was another light night with minimal late-game minutes for DeRozan (eight points) and Kyle Lowry (seven points) who collectively shot just 4-of-21. The bench once again did most of the heavy lifting with five of them scoring in double digits – Fred VanVleet, Pascal Siakam, Jakob Poeltl, C.J. Miles and Delon Wright.

The win was key as Toronto and Boston are neck and neck for first place in the conference. Next up for the Raps is a meeting with the Hornets on Sunday in Charlotte. Then the Miami Heat visit Toronto on Tuesday, fresh off their trade to bring Wade back to South Beach. 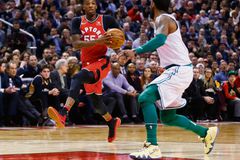 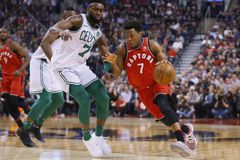