The Toronto Raptors slapped a discombobulated Cavaliers team with one of its most lopsided losses in the second LeBron James era in Cleveland. And they did so without Kyle Lowry or Serge Ibaka.

Seven different Raptors scored in double digits, highlighted by Fred Van Vleet's 22 points, and a 15-point, 18-rebound performance from Jonas Valanciunas, as the Raptors crushed the Cavaliers 133-99, the worst loss of their season.

James had 26 points on 9-of-16 shooting, and left the game before the fourth quarter even began. Raptors fans expecting to be awed by a championship-calibre Cavs squad that had added in Isaiah Thomas and Dwyane Wade this season got no such show.

C.J Miles finished with 16 points for Toronto – including four three-pointers, Pascal Siakam had 16, there was a bounce-back game for Norman Powell, who had 14, 12 for Jakob Poehtl, and an ill DeMar DeRozan had 13.

The TNT crew was there, along with a larger-than-usual throng of media – from both sides of the border. They busied the event-level hallways of Air Canada Centre, encircling LeBron James and asking various Raptors to describe their level of amazement over James' ability to still be so ridiculously dominant after 15 years in the league.

Numerous Raptors refused to call this home-stand a 'measuring stick' versus the Cleveland Cavaliers and Golden State Warriors – combatants in the last three NBA Finals.

"Any time you get a national TV game -- we don't get many up here [in Canada], obviously you wanna take advantage of that," said Van Vleet afterward, as Valanciunas cleverly re-purposed the '52' sign he held up over DeRozan's shoulder after his 52-point night and scribbled it out for a 22. "Obviously, they're a really good team, but we know the real trophies are handed out in June. It's just a good win for us after a pretty bad feeling we had the other night dropping that one to the Heat the way we did. It was a good win for us and we're looking forward to trying to come out again and try to do it again on Saturday."

It was the first meeting between the two since the Cavaliers easily swept the Raptors out of the Eastern Conference semif-inals last May. The Raptors came into the night with a 1-7 record in their last eight games with the Cavs.

The Raptors were without Lowry for a second straight game, still out with a back injury, while Ibaka was serving his one-game suspension for trading punches with James Johnson during Tuesday's loss to the Miami Heat.  In their places, Delon Wright and C.J. Miles were injected into the starting lineup.

There were early signs that this could be Toronto's night, and not just a rare courtside appearance from Drake.

There was Toronto's fast 10-4 run. There was the quick and lanky young Wright perplexing the undersized Isaiah Thomas, and two fast threes for Miles. Valanciunas had a roll-to-the-rack bucket by that left Kevin Love stuck in his tracks, and the Lithuanian big man had a double-double before half-time.

Young Raptors were having their moments. Jakob Poeltl had three explosive blocks and was dominating on the boards. Pascal Siakam scored three straight buckets in the paint surrounded by Cavs big men who seemed hardly to be trying. VanVleet led his team with 13 points by the half, while the Raptors went into the locker room with a rather preposterous 65-40 lead. The Cavs had attempted just seven three-pointers all half – and missed every one.

It was starting to look like the same kind of lop-sided score-line from their lacklustre 2017 playoff series – only this time the opposite team was dominating.

The second half was more of the same – the Raptors ruling every statistical category.

The 26-14 Cavaliers were coming off a 127-99 loss to the Minnesota Timberwolves, their largest margin of defeat this season. Mediocre on the road this season, the Cavs had dropped two of their first three games on this five-game road trip and sat in third place, below Toronto and the first-place Boston Celtics in the Eastern Conference standings. Cleveland has shown little concern for playoff seeding in recent years, but turned up the heat in the post-season.

"At the end of the day the seeds will take care of themselves, I just want us playing ball the right way," said James before the game. "For seeding, I could start a playoff series on the road, personally, and feel just as confident as if I was starting at home."

After the game, he was asked again about regular season play versus the playoffs, and reiterated something.

"You can't mess around not playing well going into the playoffs," James said.

In the end, the Raptors shot 50 percent and out-rebounded the Cavs by an astounding 63-35. Toronto had a season-high 18 threes on Thursday after shooting just 7-21 from beyond the arc in the loss to Miami. They had 31 assists against the Cavs, compared to the 15 they had versus the Heat.

"Like I said before the game and I mean it – this game doesn't make or break us," said Toronto Coach Dwane Casey. "We still have work to do as far as moving the ball and making that part of our personality every night. Tonight was good. We just got to get consistent." 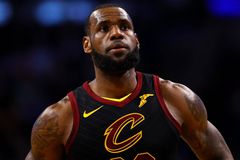 Raptors miss an opportunity to gauge themselves against NBA’s best
January 10, 2018 Raptors’ Ibaka, Heat’s Johnson suspended for throwing punches
January 10, 2018
Follow Rachel Brady on Twitter @RBradyGlobe
Report an error Editorial code of conduct
Due to technical reasons, we have temporarily removed commenting from our articles. We hope to have this fixed soon. Thank you for your patience. If you are looking to give feedback on our new site, please send it along to feedback@globeandmail.com. If you want to write a letter to the editor, please forward to letters@globeandmail.com.
Comments are closed