The Toronto Raptors and Los Angeles Clippers have been locked in similar flight patterns as they stumble toward the break surrounding the NBA all-star game.

Both teams are posting decent overall records but both have struggled of late as injuries during a hectic portion of the schedule have conspired to weigh them down.

Chris Paul, L.A.'s dynamic point guard, has been sidelined since undergoing surgery to his left thumb on Jan. 18.

For the Raptors, DeMar DeRozan, their leading scorer, has been fighting a sore right ankle that had caused him to miss seven of Toronto's last eight games.

While Paul is not expected back until some time next month, the Raptors at least received some good news heading into Monday night's game against L.A. at Air Canada Centre. DeRozan took part in a light pregame workout and pronounced himself ready to start. His presence on the court was a welcome sight to his Toronto teammates.

Paired once again with Kyle Lowry, his primary running mate, DeRozan was in fine form despite his inactivity, exploding for 31 points as Toronto (32-21) crushed the Clippers (31-21) 118-109.

For the Raptors, it was the first time since Jan. 17, when they were riding the crest of a four-game winning streak, that they have put together back-to-back victories.

Lowry was also lethal for the Raptors, chipping in with 24 points to go along with eight assists, while Jonas Valanciunas was strong up the middle, finishing with 21 points to go with 12 rebounds.

"It felt great to be back out there, just competing with my guys, putting up a victory, especially at home," said DeRozan, whose only complaint on the night was that he felt a bit winded by the end.

The Raptors were in full control by the time the fourth quarter rolled around, with the home side enjoying a 97-82 lead against a disinterested L.A. outfit that lost for its third straight outing.

While Toronto celebrated DeRozan's return, the team was still without forward Patrick Patterson, who sat out for the second straight game with a bothersome knee.

The Raptors were coming off a big, ego-boosting, 103-96 win in New York on Sunday over the Brooklyn Nets. It was only their third win in their last 11 outings – a precarious slide that has seen them fall from second to fourth in the Eastern Conference.

The Clippers have also struggled of late. They dropped their second in a row, and fourth in their last five, on Sunday when the Celtics prevailed for a 107-102 triumph in Boston.

Most of the attention in that game focused on Paul Pierce, who is winding down his great NBA career with the Clippers, primarily as a bench player. The 39-year-old, a 10-time all-star with more than 26,000 points during a 19-year career, has announced that this season will be his final hurrah.

Sunday in Boston represented his last regular-season game in the city where he played the first 15 years of his career and he was feted accordingly. And Clippers coach Doc Rivers did his part, subbing Pierce into the game late in the fourth quarter. The forward drilled the game's final shot – a three-pointer – that brought the fans to their feet in a final, fitting salute.

"I have to say, if you were a Boston fan [on Sunday] you had one hell of a day," Rivers said before Monday's game. "The Celtics won, Paul Pierce made the last shot, and then New England wins."

The opening half of Monday's game was an offensive feast, wtih the Raptors opening a 70-60 lead.

The Clippers broke fast from the gate in the opening quarter and would lead 17-6 after J.J. Redick drained a 22-foot jumper.

But Toronto's offence started to purr after that, aided by a couple of three-pointers off the fingertips of Lowry that helped Toronto secure a 35-31 lead heading into the second quarter.

At the six-minute, 33-second mark of the second quarter, Lowry drained his third three of the game, bringing the score to 54-47 for Toronto.

For Lowry, the three was the 802nd of his career with the Raptors, a franchise record, having surpassed the old mark of 801 held by Morris Peterson.

DeRozan would count 20 of his total in the opening half to go with Lowry's 18.

Nothing was going right for L.A. in the third quarter, with Lowry hitting on another three – he connected on four of his first six – to extend Toronto's lead to 88-73.

On an ensuring L.A. possession, Blake Griffin tried a showy behind-the-back pass that only wound up in the mitts of Toronto's Lucas Nogueira for the turnover.

Jakob Poeltl worked hard to secure an offensive rebound beneath the basket for Toronto and then got the shooter's bounce on the ensuring layup while being fouled with 5.6 seconds left.

He sank the free throw to complete the three-point play and lift Toronto into a 97-82 lead for the fourth quarter. 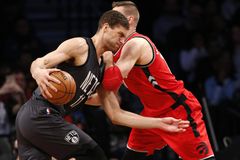 Kyle Lowry’s triple-double leads Raptors past Nets 103-95
February 5, 2017
Thomas has big fourth quarter, Celtics beat Raptors
February 2, 2017
Follow us on Twitter @globeandmail Opens in a new window
Report an error Editorial code of conduct
Due to technical reasons, we have temporarily removed commenting from our articles. We hope to have this fixed soon. Thank you for your patience. If you are looking to give feedback on our new site, please send it along to feedback@globeandmail.com. If you want to write a letter to the editor, please forward to letters@globeandmail.com.
Comments