The 17-year-old Barrett becomes just the second Canadian to win the prestigious award and first since Minnesota Timberwolves forward Andrew Wiggins captured the honour following his 2013 season at Huntington Prep.

He was named MVP after leading Canada to a 79-60 victory over Italy in the final for the country's first-ever gold medal in a FIBA world championship or Olympic event.

Barrett was the tournament's leading scorer, averaging 21.6 points a game, to go along with 8.3 rebounds, 4.6 assists and 1.7 steals.

Named in honour of Dr. James Naismith, the Canadian creator of basketball, the first Naismith trophy was awarded in 1969 to UCLA's Lew Alcindor, later known as Kareem Abdul-Jabbar. 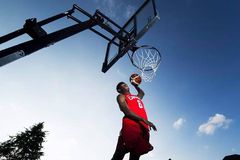 Canadian basketball star R.J. Barrett to jump a year ahead to join Class of 2018
July 31, 2017
R.J. Barrett powers Canada to gold at under-19 basketball World Cup
July 9, 2017
Report an error
Due to technical reasons, we have temporarily removed commenting from our articles. We hope to have this fixed soon. Thank you for your patience. If you are looking to give feedback on our new site, please send it along to feedback@globeandmail.com. If you want to write a letter to the editor, please forward to letters@globeandmail.com.
Comments are closed