This was training camp before training camp, the celebrated No. 1 draft pick with boundless athletic ability in daily basketball seminars at the Minnesota Timberwolves' practice gym. Numbers underpinned a bulk of the instruction, Zormelo's analysis. The smartest thing to do, at various spots on the court, considering an array of factors. Wiggins soaked it in. But like coaches before Zormelo, there was one thing the teacher wanted most out of his star pupil.

"Honestly, I wanted him to be a guy that attacked," Zormelo said.

Wiggins has delivered. As his debut professional season concluded Wednesday night, Wiggins is the favourite for NBA rookie of the year, which would be a first for a Canadian. He played on the worst team in the league, one decimated by injuries that lost its last 12 in a row. He started every game and was on the floor for the second-most minutes of any player in the league. His scoring ranks among the most prolific teenage players ever, ahead of Kobe Bryant and behind Kevin Durant.

And he attacked. The fire inside Wiggins had long been questioned. A widely heralded demarcation point came in late March, when the Timberwolves played host to the Utah Jazz.

A couple minutes into the game, Wiggins blew by his man and darted to the hoop. Rudy Gobert, a 7-foot-1 Frenchman who is the best defender of the rim in the league, stepped over to intervene but it was too late, Wiggins easily dunked. In the second quarter, Wiggins again attacked, a direct confrontation, and this time it was a rattling body-to-body collision.

Wiggins finished and posterized Gobert. The dunked basketball bounced off Gobert's head and Wiggins unleashed an uncharacteristic celebration, a bellow and a flex of the arms. The basketball Internet ignited, Vines proliferated.

The most revealing attack was the third foray. Wiggins drove in for yet another dunk – but this time Gobert prevailed, stuffing Wiggins and sending him tumbling to the floor. Gobert, on the way back up the court, paused briefly to bellow and flex for Wiggins.

"I love that he tried it a third time," said David Thorpe, who runs the Pro Training Center, popular with NBA players, at the IMG Academy in Florida.

The rise of Wiggins's game, Thorpe said, "begins and ends with assertiveness. This is the first year where being a prospect is no longer relevant."

Thorpe invoked the movie The Matrix. Knowing the path and walking the path. "There were doubts – and he's answered."

The night Wiggins was drafted No. 1 last June by the Cleveland Cavaliers, before he was jettisoned to Minnesota in the deal for Kevin Love, Wiggins declared three goals: rookie of the year and, thereafter, NBA all-star and all-defensive team. "It's a big goal of mine," said Wiggins of the rookie prize on Wednesday night. "Hopefully it comes true. It'll be great for me, the Timberwolves and for Canada."

Competition for the rookie-of-the-year prize emerged in recent months – Nikola Mirotic in Chicago and Nerlens Noel in Philadelphia – but Wiggins has long been the favourite and is the likely winner. Still, like Hollywood producers ahead of the Oscars, there is lobbying. Timberwolves staff recently sent voters, 125 of so journalists, a reminder: socks emblazoned with the image of Wiggins dunking – knock your socks off.

"I don't know who else, the way he's played," Toronto Raptors coach Dwane Casey said at the start of April. "His talent, his potential, is unbelievable."

Zormelo has watched the rapid evolution of a young man who turned 20 in February. In the season's first month, when Wiggins wasn't a prime part of Minnesota's offence, some of his flashes came on defence. Against Houston in November, Wiggins guarded James Harden. He was often matched against an opponent's best. Harden, early on, drove by Wiggins but Wiggins turned, stepped and leapt, blocking Harden's layup from behind off the backboard glass.

A third meeting with Harden – on Wiggins's 20th birthday in February – was a showcase. Wiggins scored 30 to Harden's 31 and one memorable sequence came in the fourth quarter, Harden attempting several feints to drive past Wiggins but, unable to, instead hoisted a long jumper, which Wiggins was able to get his fingers on and stymie. Back down the court, Wiggins slipped behind Harden, received a pass and put home a dunk.

Wiggins continually played his best against the best. His two games against Cleveland were among top outings, scoring 27 and 33 points, head-to-head with LeBron James. Minnesota lost both and Wiggins was, no doubt, the rookie, but held his own. "He's a great talent, a great talent," James said in January.

The evolution of Wiggins, the emergence of his confidence to attack, is clear in the numbers. In the season's first two months, Wiggins floated far from the hoop. Two out of five shots were taken 15 feet or farther from the basket. He attacked only one-third of the time. Since New Year's Day, the situation is the exact reverse. Wiggins's instinct is to go for the rim.

On the court in September in Minneapolis, before training camp, Zormelo would say: "You've got to know how good you are. You can do this and this and this."

From the view of Mitchell Wiggins, Andrew's father, who played in the NBA and was a fiery defender, it is the rookie's two-way game that separates him from his young peers. "Andrew's a different cat," said Mitchell by phone from Minneapolis.

"He can be as good as anybody who's played the game. He's proved he can be one of those guys people talk about a lot of years from now."

George Raveling, Nike's director of international basketball, has an intriguing, and revealing, viewpoint. Raveling first saw Wiggins play when he was in Grade 10 and led the senior team at Vaughan Secondary to an Ontario high school title. A year ago, critics of Wiggins would often invoke his passport. Wiggins, now, transcends nationality.

"Most Americans don't really see him as a Canadian," Raveling said. "They just see him as a great basketball player. That's a huge hurdle to overcome."

The next hurdle, equally huge, will be turning around the woeful Timberwolves. The goal next year is the playoffs, Wiggins has said. "We're going to be much, much better," Wiggins said on Wednesday night.

Earlier this month, during the long string of losing to finish the season, he said: "We'll never forget this year. It'll be motivation for us. Revenge: try and kill the teams that beat us this year."

Kelly: Raptors are about to make Toronto a basketball-first city
April 17, 2015 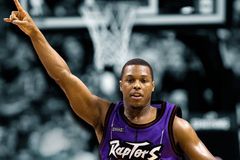 Up and down all season, can Raptors’ backcourt click in the playoffs?
April 16, 2015 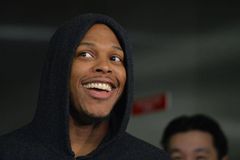 Anthony Davis brings his unibrow, and unique combination of talents, to the postseason
April 16, 2015 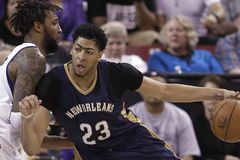