Back in 1994 when the team was still conceptual, Toronto Raptors then-owner John Bitove tried to define what the club wanted in a player.

"A Raptors player is one who plays with an aura of confidence, a hungry player, a team player, one with Raptor purple in his blood," Mr. Bitove told Sports Illustrated.

They got what they were looking for. The purple blood part, at least. For the next 20 years, the Raptors pushed out teams that were mostly anemic and occasionally in need of a transfusion.

All that ended after Sunday night's 89-84 Game 7 victory over the Indiana Pacers. Repeat: The Toronto Raptors won something when it mattered.

Looking back now, even the Vince Carter years seemed like a punishment. A brief glimpse of what a real superstar looked like and one measly playoff series win only reminded people what they were missing. The franchise became a running 12-man punchline if you did not care and a low-grade waking nightmare if you did.

If you stepped on a rake, smashed yourself in the face, then turned to the person standing beside you and said, "I really Raptored that one," a basketball fan would know what you mean.

There were plenty of opportunities on Sunday night to maintain local tradition and blow it late. In the third quarter, when a 15-point Raptors lead shrank suddenly to six points, cheers gave way to a deep, unceasing moan.

It was DeMar DeRozan – continuing to play despite the encumbrance of goat horns – who finally provided a cushion. It got far too close at the end – a 16-point lead cut to three in the space of five fourth-quarter minutes. But they managed it.

Permanent, low-level anxiety: It's the true hallmark of a Raptors fan.

Ahead of the game, they had arrayed the giveaway T-shirts hung off Air Canada Centre seat-backs in the pattern of a maple leaf.

The Raptors have long aspired to be a whole country's team, rather than just a city's. The country wasn't necessarily that interested. It's hard to grab hold of something that's always receding at the time of year most people are paying attention.

That may have changed, too.

Canada is in the midst of its basketball moment. The women's national team is a bonafide powerhouse. The men's team is likely to become one. NBA rosters are peppered with players, most of them from in and around the Greater Toronto Area, who weren't just born here. They were blooded in this country.

We will always be a hockey nation, but we are becoming a basketball one as well. It's a mark of Canada's burgeoning cosmopolitanism that the two ideas can co-exist. Together, they are perhaps the most visible marker of the larger trend.

The Raptors were the impetus for basketball's rise, as well as its last roadblock. Until they made something of themselves, it would always be possible to fall back on the old jokes and a sense that the area north of the 49th parallel was the game's own Bermuda Triangle. It's where players went to disappear.

That change began three years ago. If the second round, to be played beginning Tuesday against the Miami Heat, can begin to match the sense of pure, unexpected joy of that first sign of competence, it will be a magical time in the city.

That 2014 playoff loss against Brooklyn was more bittersweet than disappointing. All it did was stoke local fires.

Last year's annihilation by Washington felt entirely different. That was disappointing, full stop. The upward trajectory of the sport flattened out.

"We The North" began to feel shopworn and self-congratulatory. You can't taunt the opposition with division titles. Eventually, you have to win something meaningful.

This series with Indiana felt like a reckoning, not just for the team, but also for basketball, writ large. After a brief flowering, was it going to sink back into third place forever?

Though they are almost all Americans, the local disease had clearly infected the roster. They spent the last two weeks so tight, you could pluck them like guitar strings. In that, at least, they are true Torontonians.

On a daily basis, the only one who didn't carry himself like a man climbing the metaphoric gallows was the team's Canadian, Cory Joseph. Playing behind Kyle Lowry, he was the most consistent player through this series.

At 24, Mr. Joseph's life dovetails almost exactly with the lifespan of this franchise.

Like all of the promising Canadians in this league, Mr. Joseph was raised a Raptors' fan. Also like them, he watched them do little but fail. The last time Toronto won a playoff series, Mr. Joseph was in Grade 4.

"I was dreaming since I was a little boy, playing in the driveway or whatnot, I was dreaming of becoming a Toronto Raptor," Mr. Joseph told an interviewer. "It's a hotbed. Everybody wants to come here now."

"Dreaming"? "Hotbed"? "Everybody"?! When he said it, two weeks ago, it was pretty close to a laugh line.

It doesn't seem as ridiculous now. If you tilt your head and look at it just right, it seems almost possible.

Down south, it'll take more than a single decent run to change the way this team is perceived. But this series wasn't about that.

It was about us. It was about proving that the Raptors are no longer a joke, and that Canadian basketball has already arrived.

However this postseason ends, that's the real breakthrough.

Toronto Raptors beat the Indiana Pacers 89-84, advance to second round of NBA playoffs
May 1, 2016 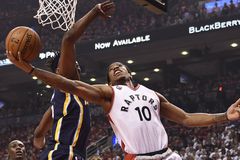 As Raptors move to decisive Game 7, many wonder if they’ll fall again
April 30, 2016 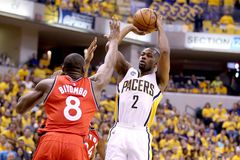