Masai Ujiri's priority is to inject life into the terminally ill Toronto Raptors, but his basketball roots will forever run deep in his native Africa.

Ujiri, hired in May to be the Raptors' new general manager, recently returned from Johannesburg, South Africa, where he led a handful of NBA stars, past and present, on a four-day pilgrimage designed to try and grow the game on the vast continent.

It was the 12th annual Basketball Without Borders mission into Africa. The NBA's global development and community outreach program's aim is to unite young basketball players, promote the sport and encourage positive social change in the areas of education, health and wellness.

The NBA has run the program, in collaboration with the sport's global governing body, FIBA, since 2001, and this summer, similar camps were also staged in Argentina and Portugal.

Ujiri, 43, was born in Nigeria, and he overcame incredible odds to become the first African-raised GM of a major North American professional sports team.

At one point during his career, Ujiri worked as an unpaid international scout for the Orlando Magic, sharing rooms with scouts and players during his travels while he bird-dogged talent for the NBA team.

For as long as is able, Ujiri says, he will continue to return to Africa to give back to the game that has provided him with so much.

"Coming here to Toronto, I want to win, I want to build and grow," the GM said Wednesday, during an interview in his sunlight-flooded corner office that overlooks Union Station in downtown Toronto. "I also think I've been put in this position to give back to the kids of Africa. It is a 100-per-cent obligation for me."

Ujiri was joined in Johannesburg by Kyrie Irving, the first-overall pick of the 2011 NBA draft by the Cleveland Cavaliers, African-born NBA players Serge Ibaka of the Oklahoma City Thunder and Luol Deng of the Chicago Bulls.

There was also a strong NBA coaching component, including Ty Corbin, head coach of the Utah Jazz, Monte Williams of the New Orleans Pelicans, and Lionel Hollins, who was fired by the Memphis Grizzlies at the conclusion of the 2012-13 season.

NBA senior executive Adam Silver, who is slated to succeed David Stern as NBA commissioner when he steps down in February, was also among the visiting party.

Ujiri, primarily because of his vast knowledge of African basketball, has been the African camp director since the program's inception, and says its growth has been phenomenal.

"I remember when I took Marcus Camby during one trip and one morning, we both went down to wake up the campers," Ujiri said. "It was like Marcus Camby waking up a kid from Sudan, a kid from Niger or Cameroon. This is a big deal for these kids and they never forget it."

Nearly 100 campers who have participated in the program (some 60 of Africa's top young players, 17 and under, are selected each year to attend) have gone on to play U.S. college basketball, including Luc Mbah a Moute, who is entering his sixth season in the NBA.

After three days of life-skills seminars, basketball skills-development sessions and competitive games each afternoon, the highlight of the final day was an all-star game and skills competition featuring the most promising players from the continent.

Ujiri is convinced Africa will become the next big breeding ground for future NBA stars, provided much-needed infrastructure continues to be built.

"Soccer is the game I started playing when I was 6, and all you needed to play was an open field and four stones to represent the goal posts," he said. "It's easy to learn. I think once there are more basketball courts, more facilities, that will make it easier for kids to pick up the game at a younger age."

Ujiri was in Africa for two weeks, and was able to attend the African championship tournament, hosted by the Ivory Coast (won by Angola).

He, along with Olajuwon, also attended the One Man, One Nation Celebration at FNB Stadium in honour of former South African president Nelson Mandela. The cultural festival included a soccer match and a rugby game.

Toronto Raptors to open the season Oct. 30 against the Celtics
August 6, 2013 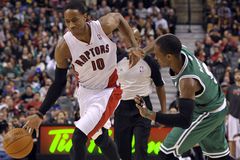