Burke, now a student manager with U.S. college's top-ranked Miami University (Ohio) hockey team, said he stopping playing hockey after making the varsity team as a high-school senior, fearing he could not make it through another season without someone finding out his sexual preference.

He finally told his father in December of 2007.

"I had a million good reasons to love and admire Brendan. This news didn't alter any of them," Brian Burke told espn.com. "I would prefer Brendan hadn't decided to discuss this issue in this very public manner. There will be a great deal of reaction, and I fear a large portion will be negative. But this takes guts, and I admire Brendan greatly, and happily march arm in arm with him on this.

"There are gay men in professional hockey. We would be fools to think otherwise. And it's sad that they feel the need to conceal this. I understand why they do so, however.

"Can a gay man advance in professional hockey? He can if he works for the Toronto Maple Leafs! Or for Miami University hockey. God bless [Miami RedHawks head coach]Rico Blasi! And I am certain these two organizations are not alone here.

"I wish this burden would fall on someone else's shoulders, not Brendan's. Pioneers are often misunderstood and mistrusted. But since he wishes to blaze this trail, I stand beside him with an axe! I simply could not be more proud of Brendan than I am, and I love him as much as I admire him." 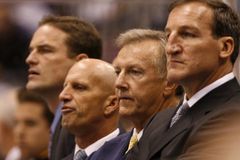 Follow us on Twitter @globesports Opens in a new window
Report an error
Due to technical reasons, we have temporarily removed commenting from our articles. We hope to have this fixed soon. Thank you for your patience. If you are looking to give feedback on our new site, please send it along to feedback@globeandmail.com. If you want to write a letter to the editor, please forward to letters@globeandmail.com.
Comments are closed