Tournament play in hockey can be a stressful endeavour, which Julien Gauthier, the plus-sized Team Canada forward, summed up thusly: "You're just not allowed to make mistakes; one small error can cost you everything."

The key, he continued before the world junior championship quarter-final against the Czechs, is finding the wherewithal to enjoy the feeling of precariousness.

Playing freely as the stakes rise counts as a skill, but the problem is sometimes things happen on a rink that you simply can't legislate against.

After dominating the Czechs – who Canada beat twice in pretournament warmup games – for most of the first period, the fates manifested themselves.

An innocuous Czech shot caromed off bodies in front of the net, fluttered in the direction of referee Jozef Kubus and kissed off the Slovak official's right hip directly to the blade of David Kase, who wired a shot past helpless Canadian netminder Connor Ingram.

After mostly doing everything right against the defensively minded Czechs in the period – the penalty kill was sharp, the power play showed signs of life, they limited the opposition to four shots – Canada was in arrears.

Boos could even be heard in the sparsely populated Bell Centre at the end of the frame.

Canada is never anything other than the tournament favourite at the world juniors – this seems doubly true when the event is on home ice – and after losing to the United States in lacklustre fashion in the final game of the group stage, there were signs of fraying.

Earlier in the day, defenceman Noah Juulsen said the true test after the U.S. game was to not lose faith in the overall approach; one bad result is no reason to doubt the game plan.

The Canadians were clearly of a mind not to let their ineffective play carry over into the second in a game they eventually won 5-3.

In the first, Canada directed 11 shots at Czech goalie Jakub Skarek. They matched that total in the opening eight minutes of the second.

A rush by Gauthier in the first couple of minutes showed evidence of a tactical shift. He bustled through the middle of the ice and outmuscled a Czech defender to create a shot.

Moments later, Tampa Bay Lightning prospect Mathieu Joseph, of the Saint John Sea Dogs, corrected his own mistake by stealing a puck in the offensive zone, his pass to Mitchell Stephens (another Lightning draft who plays junior in Saginaw, Mich., and would contribute three points in his return from injury) was then tapped through Skarek's legs by Blake Speers of the Sault Ste. Marie Greyhounds.

It's still an open question whether this Canadian team can be excellent rather than merely good, a question that will once again be asked in Wednesday's semi-final against an unbeaten Swedish squad.

But this game, where the shot clock showed 42-19 at the final horn, demonstrated they are capable of unleashing an unstoppable offensive flow; for specific evidence consider New York Islanders first-rounder Mathew Barzal's shift in the middle of the second.

The slick centre put on a stickhandling clinic, playing a one-man version of keep-away for nearly a minute, setting up teammates for shots, taking a pop or two himself and retrieving the puck through feet and sticks.

On the next shift, Chicoutimi Saguenéens centre Nicolas Roy rang a shot off the crossbar.

Seconds later, Canada took its first lead when Stephens jumped on an Anthony Cirelli faceoff win to snipe a shot that deflected past Skarek.

The Czechs didn't have a shot in the second period until Tomas Soustal outwaited Juulsen as the Montreal Canadiens prospect slid to try and thwart an odd-man rush.

Soustal's wrist shot beat Ingram on the short side; goaltending has been a question mark for Canada at the tournament. While Ingram didn't look great on the goal, there is nothing to suggest he can't carry the mail into the semi-final against Sweden and beyond.

Developments such as those propose a choice: carry on or lose your focus.

Canada elected to continue pouring forward; Ottawa Senators pick Thomas Chabot made a sumptuous move around winger Radek Koblizek – who was sent spinning to the ice – and eluded Michael Spacek to rip a shot past a screened Skarek.

Gauthier scored a pair in the third; his second, on a power play, made it 5-3 and restored a two-goal cushion after Simon Stransky scored the Czechs' third.

There was a feeling of inevitability when the Canadians took the lead.

The question is whether it will last.

Sam Gagner makes the comeback of the year with the Blue Jackets
January 2, 2017
Canada cutting it close in quest for gold at world juniors
January 1, 2017 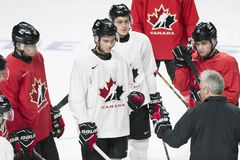 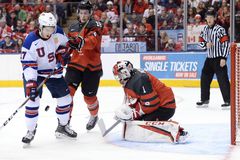