It is a vast organization with close to 12,000 athletes and 700 coaches representing 56 institutions across Canada who vie for 21 national championships each year in 12 sports.

Perhaps in part because of those staggering numbers, the organization for years has struggled to make itself relevant in the crowded and ultracompetitive Canadian sports landscape dominated primarily by professional hockey, baseball and football.

Although there is no doubting the high level of athletic skill at the CIS level, the vast majority of CIS competition occurs in mostly empty gymnasiums, stadiums and arenas from coast to coast.

The results go largely unreported by the mainstream media and an apathetic public often does not even know – or care – when an important game takes place.

Even the name – Canadian Interuniversity Sport – does not exactly roll off the tongue.

If Graham Brown has his way, that is all about to change.

Beginning Monday in Toronto, the CIS will gather for the start of its three-day annual general meeting where its new chief executive officer will outline to the members bold new strategies aimed at taking university sport to a new level in Canada.

Emboldened by a new governance structure that for the first time directly involves the participation of the university presidents who control the purse strings for athletics, Brown is envisioning a seismic shift in the way the CIS conducts business.

That will include a new national marketing strategy in which the CIS will attempt to lure the interest of big business across the country to support the growth of university sport. It will also include greater level of co-operation of the four geographical regional associations that make up the CIS and oversee university sport in Atlantic Canada, Quebec, Ontario and Canada West.

A nationally televised game-of-the-week idea is also in the planning stage and the organization will also likely engage in a total rebranding that would probably include a new name.

In order to better align itself to the country's corporate capital, the CIS has recently relocated is its headquarters from Ottawa to Richmond Hill, Ont., about a 45-minute drive north of downtown Toronto.

"Pulling in the same direction is the key piece to all of this; that's really going to be the messaging at our AGM," said Michael Mahon, the CIS board chairman who is president and vice-chancellor at the University of Lethbridge. "For us to be successful as an organization, we have to do this collectively, both the four conferences, as well as the CIS over all.

"If you look across the border … [it's] not that we want to emulate the NCAA on all fronts. But they certainly have figured out how to engage with their various corporate communities as both conferences and as the NCAA over all. And that's what we haven't done, and that's where we have to go."

Glen Grunwald is the athletic director at McMaster University in Hamilton. He has a pretty good handle on what it takes to market big-time sports successfully, having worked extensively in the NBA as the general manager of both the Toronto Raptors and the New York Knicks.

"I think university sports is in a great spot right now," he said. "And I think CIS sport is underappreciated by a lot of people – how dedicated the coaches and athletes are and how good the competition level is.

"And how important it is to our country."

Although he has yet to land a new big national sponsorship fish, Brown said he has been knocking on plenty of doors and expects to be able to announce new corporate-sponsorship deals by the fall.

In its marketing presentations to prospective corporate clients, the CIS says it has plenty to offer in return for the sponsorship dollars.

The CIS boasts that its stronghold is in the lucrative markets of Toronto, Montreal, Halifax, Calgary and Vancouver, where roughly 40 per cent of the 1.2 million full- and part-time students attend school.

About 65 per cent of those students are under the age of 24 and considered Generation Z, a marketing demographic coveted by advertisers for companies looking to enhance their future consumer base.

Brown would not say how much the CIS is seeking in sponsorship dollars from the new corporate sponsors he hopes to bring on board. But he is projecting that the CIS budget, which this past year was $3.25-million, will increase almost threefold to $10-million in three years if everything falls into place.

"This isn't blue-skying," he insists. "In all the meetings I've had commercially, when I sit there, the answer back is, 'Really, you've got everybody working together, you've got the sports collaborating and you've got the conferences and the CIS aligned?' That becomes a pretty interesting proposition commercially."

Brown said the four regional associations of the CIS had become comfortable "working in their own little silos."

Under a new working arrangement, the associations and their member schools will begin to collaborate more closely on such things as marketing strategies for games and events.

A more co-ordinated effort will also be made by the associations to schedule at least one big game a week over the course of the CIS sports calendar year, games that historically have drawn a lot of interest from sports fans.

That way, according to Brown, it would make it easier for him to try to sell a national TV broadcaster on a CIS game-of-the-week concept.

During the fall football season, it could be the home opener of perennial powerhouse Laval, which last fall attracted close to 15,000 fans to its Quebec City campus for a game against Montreal.

The next week the schedule could feature the annual Panda Game football match, which pits city rivals University of Ottawa against Carleton University. Last year's game drew more than 17,000 fans.

When CIS basketball is in swing, the game of week could feature Carleton squaring off against Ottawa, an event that earlier this year drew more than 10,000 to the Canadian Tire Centre.

For hockey, that package would want to consider a game between the University of Calgary and Mount Royal University, a city grudge match that attracted almost 13,000 fans to the Saddledome in January.

"So you've got to work hard to get the eyeballs, and give them [broadcasters] a game that's reasonable," Brown said. "No disrespect to either school, but you're not going to put Waterloo versus Windsor in football right now. That wouldn't attract anybody but people from those schools.

"You have to try to pick the games that people are going to want to watch. So there's some strategy to it."

Brown, 46, is confident in his vision for the CIS – the reason why the CIS hired him in the first place after a successful 12-year run in a similar position at Rugby Canada.

Under his guidance, Rugby Canada blossomed into one of the country's top national sport organizations.

"Last year our total sponsorship for the CIS total was $250,000," Brown said. "When you think of Rugby Canada, it was around $9-million. "The CIS has far more potential."

The trick, according to Mahon, will be for all the member universities, both large and small, to buy into what is being proposed by the new CIS.

"I think what we have to do, we have to create kind of an ecosystem for sport in CIS that enables each university to engage as it sees fit, at a level they are able to," he said. "But at the same time, to create an environment through national sponsorships and the like, that makes something that universities want to be a part of. I think that's the big piece here. We have to create an environment such that universities across the country are excited to be members of CIS." 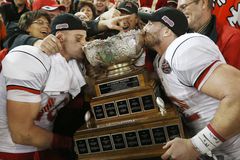 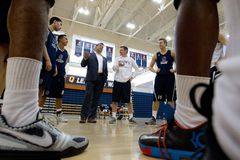 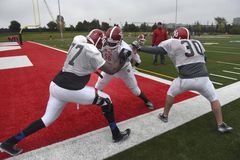