There wasn't much Charles Hamelin hadn't won in his short track speed skating career, and now he can add overall world champion to his list of accomplishments.

The Ste. Julie, Que., skater claimed his second gold medal of the three-day world championships with a victory in the 1,000-metre race on Sunday to help clinch the overall title before a roaring home crowd at the packed Maurice Richard Arena.

"Just to be able to share this with my home crowd and my family and friends is incredible," said Hamelin. "It's been 15 years and to finally get it is unbelievable.

"My goal was always to win that every year, but world short track is tough. To do it here was the greatest gift you can give to me."

The 33-year-old became the first Canadian to take the overall title since Marc Gagnon of Chicoutimi, Que. in 1998.

Hamelin, who has won five Olympic medals as well as 11 gold and 34 total world championship medals, had planned to retire after this season, but he announced this week he would stay on for at least one more season.

He felt coming out of the Pyeongchang Olympics less than a month ago that he was skating as well as ever and saw no reason to stop.

Then he showed his strong form at the worlds, winning the 1,500-metre event on Saturday, taking gold in the 1,000 and adding silver in the men's relay.

"I feel I can accomplish other things on the Canadian and international level, and I want to be around the short track world and help the kids that are coming on the team," he said. "I want to show them the way to do things right and bring them to a high level so they can at some point live what I'm living now – being overall world champion.

"I don't want it to be another 20 years to see a Canadian having that title."

The world championships were the last event for Hamelin's brother Francois and for Marianne St-Gelais of St. Felicien, Que., the long-time star of the women's team.

St. Gelais was shut out of the medals in individual events but snagged a bronze in her last race, the 3,000-metre relay, with teammates Kim Boutin of Sherbrooke,Que., Valerie Maltais of Saguenay, Que. and Kasandra Bradette, also of St. Felicien.

"This is it," said St. Gelais, who hopes to start a new career in the media. "I'm happy.

"I knew today the emotions would be there, so I managed it pretty well. In the 1,000, I had a good quarterfinal, the semi was hard, but I'm not disappointed at all. At these world championships I wanted to be competitive and go for the gold for sure, but at the same time I knew I had other things to manage. The emotion was part of it."

Hamelin and Olympic 1,000-metre champion Samuel Girard of Ferland-et-Boileau, Que. both reached the 1,000-metre final, but Girard was disqualified for a bump that saw Hamelin's closest competitor Hwang crash into the wall. Hamelin cruised in just ahead of Lim Hyo Jun of South Korea with Sjinkie Knegt of the Netherlands third.

Shim Suk Hee of South Korea won the women's 1,000 ahead of Sofia Prosvirnova of Russia and Li Jinyu of China. Choi Min Jeong of South Korea, who had won the 500– and 1,500-metre events on Saturday, was fourth in the final.

St-Gelais and Boutin were eliminated in the semifinals, while Jamie MacDonald of Fort St. James, B.C. was disqualified in her quarter-final. 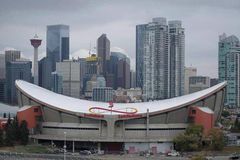 What Canada did: A look at the medals earned at the Pyeongchang Olympics
February 25, 2018 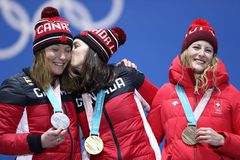 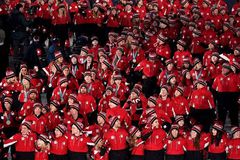