So there is your Canadian moment.

For those skeptical about the game in general, and those fans of men's soccer who can't quite wrap their heads around watching the women, comes a pretty definitive counterargument: a display of toughness drawn straight from the national hockey mythology, followed by a piece of skill worthy of any elite male player.

Both were provided by Christine Sinclair, Canada's captain at the Women's World Cup, the greatest soccer talent of either gender the country has produced, who played on despite suffering a broken nose, who scored on a picture-perfect free kick against Germany, the storybook hero in one of those losses that feels like a win.

Canada did indeed lose its opening match 2-1 Sunday to the two-time defending champions at the majestic Olympiastadion, a result expected by just about everyone outside the Canadian locker room.

It could have been worse. The Germans missed a couple of glorious chances that would have made the score line considerably more lopsided. And perhaps it could have been better had Sinclair, who was sent clear by a nifty Diana Matheson pass just six minutes into the match, been able to convert, instead of shooting the ball high over the bar.

"I think that today maybe if Christine Sinclair scores the first chance that she had, maybe now we could talk about another result," Canada's coach, Carolina Morace, said. "But I am satisfied also."

That satisfaction was due in large part to the fact that Sinclair scored Canada's goal in the 82nd minute.

(Consider that Germany did not surrender a single goal in winning the 2007 World Cup. Consider that it hadn't surrendered anything in any competition since last October, a stretch of more than 11 hours of playing time.)

And the magnitude of that score - recorded on what was Canada's only official shot on goal - will grow in legend because of what happened to Sinclair just after halftime.

Canada was trailing 2-0 at that point, with both goals coming as the result of glaring defensive miscues. First, in the 10th minute, German defender Babett Peter pushed forward and hit a beautiful cross from deep in the corner. Keeper Erin McLeod, who otherwise played a strong match, misjudged the ball and was caught in no-woman's land as it sailed over her head. That left defender Marie-Eve Nault all alone marking Kerstin Garefrekes, and that proved to be a mismatch; Garefrekes outmuscled and outjumped her, then headed the ball into the net.

Canada finally started to settle down in the latter stages of the first half. Morace had decided that the best tactic against the prohibitive favourites was to go on the attack - like Buster Douglas deciding to punch back - and to that end she pushed midfielder Melissa Tancredi forward, joining Sinclair and Jonelle Filigno in striking roles.

After the half hour, it seemed those bold tactics were starting to pay off. Canada controlled the ball for long stretches in the German half of the field, playing a controlled possession game while aggressively closing space when the Germans had the ball.

But then, just three minutes before the half, Nault was victimized again. This time she seemed lost, failing to move up with her defence partners, leaving Celia Okoyino da Mbabi to take a chipped ball and run free for what was effectively a 40-yard breakaway goal.

That seemed to take the starch out of Canada. Nault was substituted at the half. ("It could happen that it was the crowd, it was the first World Cup for her, so she made just a little mistake," Morace said. "But when one team gives up a goal, it's not just that one player makes a mistake. Everybody makes a mistake. Me too. It's not just one player.") And then the Germans began to attack in waves.

In the 48th minute, Sinclair was fighting for a ball with Peter when the defender's elbow swung up and clipped Sinclair square in the face.

"Actually, it is not allowed to receive the elbow to the face," Morace noted, dryly, after the match. No foul was called on the play.

Sinclair went down in obvious pain, and the Canadian medical staff rushed to her side.

"The doctor said to me the nose is broken," Morace said. "But I look at her and she said, 'Let me play.' She wants to play, she can play. I ask the doctor what could happen. He said if she received another hit it could be dangerous. But Christine is a smart player. She knows what she can do and what she cannot."

"I looked at her and I thought, 'Oh my,'" McLeod said. "Her nose was like a big zigzag and I said, 'Do you really want to still be here?' And she said, 'Yeah, I got it.' She's tough. She wears the [captain's]armband for a reason."

Sinclair lined up for a free kick just to the right of goal and sent the ball curling over the German wall and past the outstretched hands of Germany's keeper, Nadine Angerer.

As she ran down the field celebrating, Sinclair looked to Morace on the sidelines and blew her a kiss.

Suddenly, the huge partisan crowd (enthusiastic, though considerably gentler and more sober than the men's soccer equivalent) was struck dumb and seemed nervous as Canada pressed hard for the equalizer. They came close, on a corner, but in the end, the better team - the best female team in the world for the past decade plus - won.

Canada moves on to a match against a tough French side on Thursday before closing out the group stage against Nigeria. Two wins and they're through to the quarter-finals. A draw and a win might also do it. No sure thing, nothing to be taken for granted, but emotionally, this was a big night.

"The first game in all tournaments, and above all in the World Cup, is always tough," Morace said. "At the beginning maybe we were just a little scared.

"But I think that my team showed something very good. Today we are more confident than yesterday." 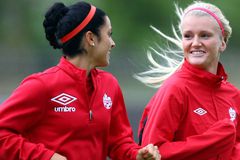 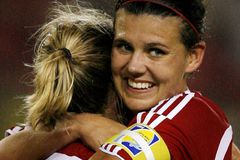 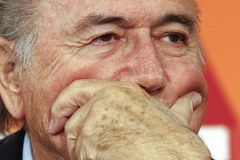