Good timing has not exactly been the forte of Toronto FC over the course of its unsteady existence.

Take, for example, the Reds' return home to BMO Field on Saturday against the Montreal Impact. It should have been a time for celebration for the Reds, who played their way to the top of the Eastern Conference standings with two wins and a draw the previous week.

Never in the 10-year history of the franchise have the Reds been able to peer down on the rest of the competition so late in the Major League Soccer season.

Usually it has been the other way around.

But Toronto responded Saturday with a limp effort and 1-0 loss to the Impact before more than 28,454 rabid supporters, a result that the Reds' normally even-keeled coach Greg Vanney described as "embarrassing."

To make matters worse, the Reds lost their best player, star striker Sebastian Giovinco, who suffered strains to his quadriceps and adductor, injuries that could sideline the high-scoring 29-year-old for up to a month.

Adding to the consternation, a TFC supporter in the south stands displayed a rather unsavoury banner throughout much of Saturday's match, forcing the club to publicly apologize to the Impact and their fans.

The bad timing hearkens back to last season, when Toronto clinched a MLS playoff berth for the first time in franchise history with a riveting 2-1 victory over the New York Red Bulls at BMO Field on Oct. 15 – and hardly anyone in the city noticed.

That's because on the same day at nearby Rogers Centre, Jose Bautista was launching the bat flip heard around the world after stroking the winning three-run home run against the Texas Rangers that propelled the Toronto Blue Jays into the American League Championship Series.

Now, a year later, the Blue Jays are once again challenging for first place in the American League East, so TFC – despite its stellar record – is once again operating largely under the radar.

On Wednesday, Vanney will mark his second anniversary as the Reds' coach. And while he happily asserts that the best is yet to come, he also knows the work is far from complete.

"I think we're moving in the right direction," Vanney said after the Reds worked out at their Downsview practice facility on Tuesday.

"We've got a lot more to prove … a lot more we can grow still in our performances. For me, we're not anywhere near that just yet."

The loss of Giovinco, last season's most valuable player in the MLS who is tied for the league lead in goal-scoring this year, is more than just another bump along that road.

The only bright spot is that Giovinco's injury comes at a time when the Reds have a bit of a break in the schedule; they're not slated to play again until Sept. 10, when they visit the Chicago Fire.

If Giovinco is a quick healer, he might miss only three games.

"Obviously, Seba works very hard, he's extremely fit," Vanney said of his striker. "He'll do everything he can to get back in a speedy fashion, whatever that looks like for him. But the rest of us will step up. We still need to perform as a group, as a collective unit, and we can still win games. I have no doubt about that."

But Vanney said that one thing he will not do is rush his star player back into the lineup before he is ready. "We have big-picture things in front of us in terms of playoffs and all that kind of stuff," Vanney explained.

While the break in the schedule is nice, Vanney said it is difficult to maintain any sort of a rhythm during training with so many injuries and absences. The Reds are also missing four players, including team captain Michael Bradley and forward Jozy Altidore, who are playing for their countries in World Cup qualifiers.

Defender Drew Moor is in his first season with Toronto after he became the first free agent signing in club history in December. He already has one MLS Cup championship to his credit playing with Colorado in 2010, and he signed with Toronto because he sensed the Reds were moving in that direction.

"That just seemed, when I came to visit here back in December, to be the overall theme," Moor said. "This team was hungry and thirsty, and this city wants this team to win a championship." 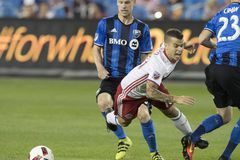 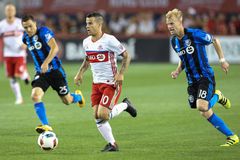 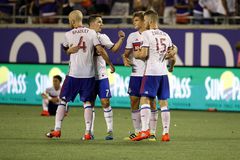