The list of things in which Americans happily consider themselves underdogs probably begins and ends with hockey. And that's the the way they like it. They know no one in the U.S. got up at 3 a.m. to watch them in their total 5-1 domination of Canada in the WJHC semi-finals. And that anonymity probably gave them the chip on the shoulder incentive that the highly scrutinized Canadians can never get.

The win will delight the American management, who have a very different development scheme from Canada, preferring a hothouse model to Canada's far-flung junior system. With no gold since 2009, it will send Hockey Canada into one of its periodic funks of self doubt about why the millions they lavish on the team isn't brining home the bacon at crunch time.

It's challenging for TSN talent to be too critical in these situations. The network is a de facto partner of Hockey Canada in this annual event. But they manned up Thursday. "It was pretty much a disaster from start to finish," said host James Duthie. The redoubtable Bob McKenzie was succinct, "First off, no excuses," said the veteran analyst. "It's a lockout year, Canada had its absolute best to put into the game, and it didn't get the job done."

"This one is on everybody from coach Steve Spott and his staff to every man in the lineup," added McKenzie. "And that includes Ryan Nugent-Hopkins, the best junior-age player in the world... he came up... and didn't have it in this game."

A middle-of-the-night meltdown: Duthie did float the notion that the bye for Canada put them into the deep freeze. But the broadcaster resisted a call for a national soul searching to get the Canadians back to gold. No doubt, sports radio talk shows won't be as kind in the upcoming days.

The drubbing was bad enough for the Canadian players, but for the millions back home in Canada who got up in the middle of the night to get their only fix of hockey so far this winter, it was a sleep deprivation disaster. When Duthie said at the conclusion, "Full postgame ahead on TSN," you knew he was only talking to PVRs and people asleep on the sofa by then.

The analysis was thorough but fair for a team that travelled to the other side of the earth to gets its lunch handed to them. In a hockey winter devoid of thrills so far, this middle-of-the-night meltdown was all too typical.

The cap and the Oilers: So you're an Edmonton Oilers fan watching Nugent Hopkins at the WJC before this morning. You're feeling pretty bullish on the future of the Oil. RNG, Taylor Hall, Jordan Eberle, Justin Schultz, Nail Yakupov, Sam Gagner and Ales Hemsky in the lineup would make any fan or general manger smile.

But before engraving the Oilers' name on the Stanley Cup five more times, best for Oil fans to cast an eye on what the NHL and NHLPA are doing to your future. With the reduction in salary cap-- married to an almost sure loss of a billion dollars in revenue this season-- the NHL is guaranteeing that Edmonton will have an impossible task hanging onto its cadre of young talent.

Edmonton isn't the only team being affected by the shrinking salary cap, but they are the most dramatic example. James Mirtle explains the numbers here.

Edmonton already has Eberle and Hall under similar $6-million a year cap hits till 2020. Ales Hensky's got a $5-million tag until 2014, while RNG, Schultz and Yakupov could cost up to $3.75-million if they jot their entry-level bonuses.

Then there's the millstone of Shawn Horcoff's $5.5-million a year till 2015, too. So where does GM Steve Tambellini find the money to pay market value to all his superstars when they hit the Eberle/ Hall threshold? How does he pay an elite goalie or defencemen like Ladislav Smid when his turn comes up?

Edmonton could buyout Horcoff with an amnesty, and the NHL could miraculously pump revenues back up immediately to the $70-75 million mark. But even then, the new CBA will force a serious cull of their prize draft picks by the Oilers management. If all the top draft picks who've starred at the WJC level perform, there's only so much money left to pay them all.

Don't cry for owner Darryl Katz. He'll be able to pocket a lot more of the dollars generated in northern Alberta that might otherwise go to salaries. It will be Edmonton fans who subsidize the NHL's weak markets with their frustrated hopes for a title. "For want of a Nail (Yakupov), a title was lost..."

Negotiations get deep: We're going to miss late-night CBA negotiations where people like Don Fehr go all zen on us: "If there's a river to cross you build a bridge or find another way." (Didn't David Carradine say that in Kung Fu?) No wonder sleep deprived Gary Bettman said the sides had engaged in "philosophical discussions." Hegel? Wittgenstein? Kant? Now, there was a line who could pass the puck. 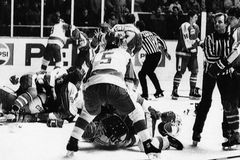 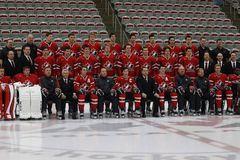