The Montreal Alouettes are looking to put a bad game behind them Monday against Winnipeg.

The Blue Bombers hope to just wake up from their nightmare season.

Montreal, which leads the CFL East Division with an 8-5 mark, lost 41-28 in Hamilton in its last outing on Sept. 28. The Alouettes had won five of six before dropping their fifth straight game at Ivor Wynne Stadium, including two this season.

"I think every week we've always had the ability to move on, whether we've had a success or a failure in the past, and for us that's been a good thing," Alouettes quarterback Anthony Calvillo said Sunday. "We've just got to remember that we just can't get used to the fail part and losing games. We've lost some games just based on silly stuff and that's us performing at a level that we should not be playing at and for us we have to be consistent and that's our challenge right now.

"We are in first place but we felt that we've lost some games badly because we weren't playing up to our potential so we just can not allow it to happen. We have five more games to improve on that and it's going to start (Monday)."

Against Winnipeg, Calvillo and the Alouettes will be facing a Grey Cup finalist that has fallen all the way to 3-10.

While he has his own team's struggles to concern himself with, Calvillo was at somewhat of a loss to explain how the Blue Bombers squad that beat Montreal in last year's East final has plummeted so far this season.

"It's hard to say because for me I know that defence is tough," Calvillo said. "They're leading the league, I think, in quarterback sacks and they get to the quarterback. They've had some injuries, just like everybody else in this league, but I know they're playing a lot better with all their DB starters back and for us that's what we're going to have to be concerned about."

The Blue Bombers' defence has been aggressive with 31 sacks, but it has also proved generous against the run, allowing 118.8 rushing yards per game.

"They have a great defence," Alouettes running back Victor Anderson said. "Those guys up front, the secondary, they're smaller guys but they're vicious and they play very good football so we've just got to go out and execute."

Anderson had just seven touches and was held to 15 yards rushing in Hamilton. He averaged 4.5 yards while rushing for 76, including a touchdown, in Montreal's 31-10 win over Toronto on Sept. 23.

The five-foot-nine rookie from the University of Louisville has been able to count on the advice and support of all-star running back Brandon Whitaker, who is out for the season after tearing the anterior cruciate ligament in his right knee in a 28-17 win over Saskatchewan on Sept. 16.

"He's done a lot to help me and a lot of the other guys, so I'm just taking the opportunity and trying to fill in the most I can," Anderson said. "It's hard to replace such a great back."

Blue Bombers interim head coach Tim Burke won two Grey Cups as Montreal's defensive co-ordinator from 2008-10. He didn't have to concern himself then with defending against Calvillo, who he singled out as the key to Monday's game.

"He's the master and we've got to get him off rhythm somehow, whether it's by getting a pass rush or playing man coverage and making him hold the ball a long time, maybe a couple of new wrinkles that might throw him a little bit," Burke said. "But really that's the biggest key, and then the other thing is offensively. We've got to produce. We've got to come out and get going against their defence and we've got to finish strong too."

Blue Bombers quarterback Buck Pierce suffered a concussion in Winnipeg's last game on a hit by Brandon Isaac in a 29-10 loss to Toronto. He travelled to Montreal but will not dress for the game.

With Pierce sidelined, Burke is going with Joey Elliott to guide the Blue Bombers on Monday, the third different quarterback to start for Winnipeg against the Alouettes this season.

Montreal won the first two meetings this season, including a 41-30 win over Pierce at Percival Molson Stadium on July 6. Alex Brink started for Winnipeg on Aug. 3 in the Blue Bombers' 36-26 loss to the Alouettes at Canad Inns Stadium.

"That's what you have to try to do as a quarterback. We're a close knit group as quarterbacks. We all work really well together and hopefully everybody sees that so they don't really mind who's in there, but it could be a strain on the whole offence." 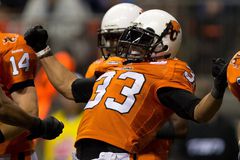 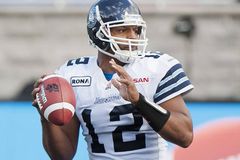 Lions hold-off surging Stampeders
October 7, 2012
Report an error
Due to technical reasons, we have temporarily removed commenting from our articles. We hope to have this fixed soon. Thank you for your patience. If you are looking to give feedback on our new site, please send it along to feedback@globeandmail.com. If you want to write a letter to the editor, please forward to letters@globeandmail.com.
Comments