If they had time to hang their heads or make excuses, both the Toronto Argonauts and Hamilton Tiger-Cats might be forgiven for complaining about the hard luck they've faced this season.

The Argos could cite the loss of star quarterback Ricky Ray, who was out for 16 games recovering from injury, and they were repeatedly displaced from their home park at Toronto's Rogers Centre by the Pan American Games and Blue Jays playoff games; they often were forced to play those "home" games on opponents' turf.

The Ticats, meanwhile, could sulk about watching a sensational season for pivot Zach Collaros disintegrate with a September knee injury, or about losing backup quarterback Jeff Mathews to a subsequent concussion.

In a league where six of nine teams make the playoffs, it's not unusual for teams with blemishes on their records to get in and make hay. Regardless of how the two 10-8 Ontario teams hobbled into this opportunity, they'll face off in the East Division semi-final on Sunday with a shot at playing the Ottawa RedBlacks in next week's Eastern final.

The Ticats will be starting third-string pivot Jeremiah Masoli, and the Argos will give Ray the ball for just his third start this year after a long and painful recovery from off-season shoulder surgery.

But neither team will be caught whining about the road they've travelled.

The Ticats didn't stray from their usual loose nature this week, heckling and photo-bombing one another during media interviews, and singing along as Queen played in their locker room. Toronto had a nothing-to-lose spirit, too: During its final indoor practice inside a domed field at Downsview Park, players were bouncing along as loud music ricocheted off the bubble to simulate the raucous crowd noise they'll face at sold-out Tim Hortons Field in Hamilton.

While Ray was unable to play, backup Trevor Harris thrived in most of his starts for the Argos. And when the team was forced to play home games on the road – once in far-away Fort McMurray, Alta. – they made the most of it.

"We just called ourselves road warriors. The per diem was pretty good and we saw parts of Canada we'd never seen," said Argos linebacker Brandon Isaac, a South Carolina native. "We really got know each other."

The Ticats beat the Argos three times this season, but Collaros played in all of those games and Ray played in none. The Argos have yet to win at Tim Hortons Field and this will be Ray's first start there.

"I feel lucky to be out there playing and lucky coach showed the confidence in me," said Ray, winner of three Grey Cups, including one in 2012 with the Argos. "I'm trying to pay him back with good play."

The Ticats defence is known to stack the box to stop the run, and that will be one of the most intriguing elements to this game. Ray, long known for throwing stunningly accurate corner routes and his ability to calmly and quickly find receivers under pressure, is still building strength in that repaired shoulder.

"He's still Ricky," said Ticats coach Kent Austin. "He's played in big games, he's unbelievably accurate, smart. He's won a lot, he gets the ball out of his hand, he knows where to go, he's calm and won't panic no matter what situation he's in. He will play well, we know that."

Hamilton was one of just three CFL teams to allow fewer than 400 points this year, while thanks largely to Collaros's hot start, the offence put up a league-leading 530 points. But neither team goes into the semi-final with much momentum: Hamilton lost five of seven games down the stretch; the Argos lost three of their last four.

"When Zach went down, we followed it up with a bye week, so in that time, it was hard to get over it, and we dwelled on it for that week," Ticats receiver Luke Tasker said. "But you can't slow down, you can't hang your head. Zach's injury is no longer a shock to us now; it's just something we've been dealing with. In our meeting room, we have faith in Masoli and [fourth quarterback Jacory Harris]. It's just business as usual." 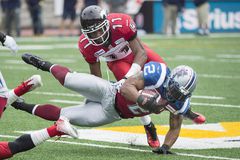 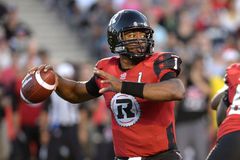 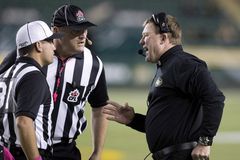