The CFL has won another court decision in British Columbia in a legal battle over concussions – but lawyers for retired receiver Arland Bruce plan to seek to be heard by the Supreme Court of Canada.

At the heart of the case is the issue of concussions in football. In 2014, Bruce sued the CFL, its teams and several individuals for negligence. He alleged that a concussion led to a spate of health problems. However, in court, the legal issue of jurisdiction came to the fore. Last year, the B.C. Supreme Court ruled against Bruce, saying the case should be settled by arbitration under the CFL's collective agreement, not in court.

The B.C. Court of Appeal, the province's highest court, agreed in a decision released Friday. In a unanimous 3-0 ruling, Justice Mary Newbury dismissed Bruce's appeal and wrote that he "could have obtained effectively remedy" through arbitration.

Attention now turns to the Supreme Court of Canada, where Bruce's lawyers will apply for leave to appeal. Canada's top court only accepts about 10 per cent of such applications. "The possibility of succeeding in getting an appeal heard is in general remote," the court says on its website.

Bruce's lawyers believe that their loss at the B.C. Court of Appeal contains the makings of a case for the Supreme Court.

"It reads as a loss but there are some exciting messages that the Court of Appeal has sent," said lawyer Robyn Wishart of Wishart Brain and Spine Law. Wishart noted that Newbury described the lawsuit as "unusual" and also called the CFL's collective agreement "unusual."

"She leaves the door wide open for us to go to the Supreme Court of Canada to say, 'We need your help to change the law.' The Supreme Court will decide whether this is a matter of public interest. We hope the court will give us an opportunity."

The CFL, in a statement, said it was happy with its win. "We hope that this decision brings finality to any proceedings in the courts with respect to concussion litigation against the CFL."

The CFL has pursued the same legal strategy as other sports. The NFL had argued the jurisdiction question in court in the United States before it decided to settle, a deal worth $1-billion. The NHL, in a U.S. court, also fought on jurisdiction but last year it lost an interim decision on that question as the case proceeded.

In B.C., the court decisions followed an established pattern dating to a 1995 Supreme Court case called Weber v. Ontario Hydro, between a worker on long-term disability and the electricity utility. Justice Beverley McLachlin wrote the majority decision for Weber, five years before she became chief justice. Legal decisions around the Weber precedent have not varied notably in the past two decades and the top court may decide it wants to revisit the issues, especially given the high-profile nature of the question of concussions and sports.

But given the current legal precedents, the decision of the B.C. Court of Appeal was not a surprise, said Brian Langille, a law professor at the University of Toronto.

"This is where the safe money would have been," Langille said. "There's nothing striking about the conclusion."

The second legal win for the CFL could affect a $200-million class-action concussion lawsuit filed in Ontario against the CFL, which isn't directly related to the Bruce case. 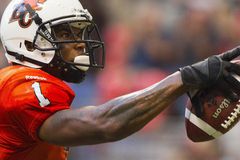 CFL finds lack of ‘conclusive’ evidence of concussion effects
November 25, 2016
Follow David Ebner on Twitter @davidebner
Report an error Editorial code of conduct
Due to technical reasons, we have temporarily removed commenting from our articles. We hope to have this fixed soon. Thank you for your patience. If you are looking to give feedback on our new site, please send it along to feedback@globeandmail.com. If you want to write a letter to the editor, please forward to letters@globeandmail.com.
Comments