McLeod Bethel-Thomson hit S.J. Green for an 11-yard touchdown pass with 10 seconds remaining, and the Toronto Argonauts rallied from a 20-0 disadvantage to beat the Winnipeg Blue Bombers 28-27 on Thursday for their first win of the CFL season.

It was Bethel-Thompson’s third TD pass of the game, with newly acquired quarterback Zach Collaros watching from the sidelines.

Down 27-21, Toronto pushed for the win and drove the ball to the Winnipeg 16-yard line as the clock wound down. But Willie Jefferson forced a Bethel-Thompson fumble to snuff out the 12-play, 77-yard drive.

Bethel-Thompson, who threw for more than 300 yards, survived a fumble to convert a third-and-short on the drive and ran for another first down.

Toronto had one more chance and got it right this time on a 71-yard, nine-play drive.

As they did in a 48-21 loss in Winnipeg on July 12, the Argonauts fell behind early. But this time they came back. The Argo offence kept grinding and the defence began to blunt the Bombers (5-2-0).

Trailing 20-0, the Argonauts scored 10 points late in the first half. After a Toronto field goal made it 20-13 early in the third, a 78-yard Chris Rainey punt return took the ball to the Winnipeg seven-yard line. After Derel Walker dropped a pass in the end zone, Toronto won a coach’s challenge on the next play asking for pass interference.

Bethel-Thompson then found 6-foot-6, 305-pound lineman Jamal Campbell, an eligible receiver, for a one-yard TD, tying the game at 20-20 midway through the third.

Matt Nichols hit Chris Matthews for a seven-yard strike to put Winnipeg up 27-20 at 2:12 of the fourth after a drive fuelled by Andrew Harris.

Toronto trailed 13-0 after a first quarter that saw Harris notch his longest run of the season for a 56-yard TD. Harris rushed for 107 yards in the first half alone and 152 in total on 15 carries.

Things went from bad to worse late in the first quarter when Shayne Gauthier blocked a Toronto punt and the Argos were called for intentional grounding on an ugly third down that left the Bombers with the ball on the Argos 16-yard line. The Toronto defence held the visitors to a field goal, however.

The Argos have now failed to score a first-quarter touchdown in nine straight games, dating back to 2018. They have gone 33 straight first-quarter possessions without a TD. They have managed just four field goals during that stretch, punting 21 times.

Toronto escaped further punishment in the second quarter when Harris fumbled – for the fourth time this season – on the Argos’ seven-yard line. But a 13-yard run by Harris later in the quarter increased the Winnipeg lead.

Toronto finally got on the board late in the half on a 45-yard field goal by Crapigna – the Argos’ first points since the third quarter of a July 18 loss in Calgary.

Smith then capped an eight-play Toronto drive with a 12-yard reception from Bethel-Thompson with 47 seconds remaining in the half to cut the lead to 20-10.

A Brandon Burks 55-yard TD reception from a Toronto screen pass was called back for holding early in the third quarter. The Argos settled for a field goal, making it 20-13 after a 10-play, 55-yard drive.

Winnipeg saw its five-game win streak snapped last time out in a 23-15 loss in Hamilton. The Bombers turned the ball over six times (three interceptions, two fumbles and once on downs) in that loss. Winnipeg spent the week training in Guelph.

The Bombers had won their last three meetings with the Argos by margins of 18, 26 and 27 points. But they were just 2-4-0 in their past six trips to Toronto. 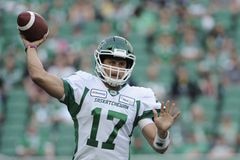 Dane Evans gets the call at quarterback for Tiger-Cats against Roughriders Subscriber content
July 31, 2019 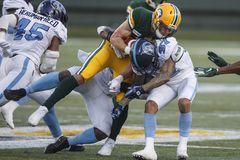