The Canadian Football League is asking the federal government for up to $150-million in financial assistance due to the COVID-19 pandemic.

CFL Commissioner Randy Ambrosie told The Canadian Press on Tuesday the league’s proposal involves three phases: $30-million now to manage the impact the novel coronavirus outbreak has had on league business; additional assistance for an abbreviated regular season; and up to another $120-million in the event of a lost 2020 campaign.

“We’re like so many other businesses across Canada,” Ambrosie said. “We’re facing financial pressures unlike anything we’ve seen before.

“Our best-case scenario is we’re almost certain to have to cancel games. But at worst if this crisis persists and large gatherings are prevented, we could lose the whole season and the types of losses we could incur would be devastating.”

If the season is wiped out, Ambrosie said the CFL’s long-term future would be in peril.

“One of the things, I think, that the CFL and all of us who love the league pride ourselves on is we’re striving to be very optimistic,” he said. “But to be realistic, the kinds of losses could have an effect on the future of this league.”

A federal official declined to comment on the league’s proposal.

The federal government already has introduced a $73-billion wage subsidy program to cover 75 per cent of wages for employers that have seen sharp declines in revenue since the novel coronavirus pandemic hit Canada hard last month.

The wage subsidy program makes up half the roughly $145-billion in federal spending on COVID-19 countermeasures, and will cause a ripple of changes for the millions of workers who have either lost their jobs or had their hours slashed due to the crisis.

Three of the CFL’s nine teams – Edmonton, Saskatchewan and Winnipeg – are community-owned. The remaining six are privately owned.

Ambrosie said the CFL is an important part of Canada’s fabric. The CFL was founded in 1958 following the merger of two previous leagues. The Grey Cup was first presented to Canada’s football champion in 1909.

Unlike many other professional leagues with Canadian teams, the CFL mandates a minimum amount of Canadian content for its rosters. Twenty-one of 46 players to dress each game must be Canadian.

“I wake up every day reminded how important this game is to Canada,” Ambrosie said. “How big a part of Canada it’s been for now 107 Grey Cups and the 108th that would be played this year.

“How many Canadians have been positively affected by this great league and also how aligned we are with Canadian values. In so many ways we are so much like this country and we want to make sure we’re around for the next generation and the generations after that to benefit from what this league has stood for.”

The Grey Cup is scheduled for Nov. 22 in Regina.

The CFL hasn’t given up on staging a 2020 season but it has postponed the start of training camps – which were to open next month. It has also pushed back the beginning of the regular season – which was to begin June 11 – to early July, at the earliest.

But many provincial governments have said there will be no sports events with large crowds this summer.

“No decisions have been made but it’s pointing us to a September start, at the earliest,” Ambrosie said.

“We’d love for things to stabilize and improve in the weeks to come and try to play sooner than that but there’s a lot pointing to September as being a reasonable person’s view of when we might be able to resume.

“But again there’s so much we don’t know at this point and so many unanswered questions that we’re just going to have let time march and then determine what’s best as we learn more.”

Ambrosie doesn’t see it as asking for a government handout. He wants the CFL to be able to give back to Canadians in other ways.

“We’ve been clear to the federal government we want to be accountable to taxpayers,” he said. “In all conversations we’ve talked about making sure the model would hold the league accountable to repaying Canadians back through community programs, tourism promotion, the Grey Cup, our digital channels.

“Anything and everything to repay the government we would be amendable to.”

This isn’t the first time the CFL has faced a financial crisis.

From 1993 to ‘95, the CFL had teams in seven American markets – Las Vegas, Sacramento, Memphis, Baltimore, Birmingham, Ala., Shreveport, La., and San Antonio. The expansion fees paid by the clubs helped keep the league operating.

In 1996, the CFL faced not having enough cash to pay Edmonton Eskimos and Toronto Argonauts players in the Grey Cup game. But the potential crisis was averted when Tim Hortons provided the league with extra funds.

In 2003, the Toronto Argonauts and Hamilton Tiger-Cats met in the infamous Bankruptcy Bowl because neither franchise had an owner. The league did manage to secure new ownership for both clubs.

Some sports have suggested the idea of resuming play without fans. But Ambrosie said that’s a scenario that would be hard for the CFL to adopt because gate revenues are vitally important.

“It’s something we’ve explored but it isn’t a high-probability scenario,” Ambrosie said. “We’ve basically explored the landscape of all the things that sports are doing around the world and we’ve thrown those into the mix.

“We have said, ‘Let’s at least do the work to see whether that scenario would work for us.’ While many of those options don’t appear to be viable today, we’re not discarding anything because we don’t know what we’ll be facing in a week, much less a month or two from now.”

The Winnipeg Blue Bombers, one of the community-owned franchises, reported in 2018 that 13 per cent of their revenue came from the CFL – with the television deal with TSN likely accounting for a large portion of that.

More than half of the team’s revenue came from game operations and concessions.

The CFL and CFL Players’ Association had been jointly discussing all possible contingency plans for the 2020 season. But a disagreement in talks last week resulted in the two sides no longer meeting.

The two sides must agree to make any modifications to the current CBA. But Ambrosie remains undeterred.

“We have an issue we didn’t agree on and that’s fine because sometimes that happens,” Ambrosie said. “But rather than poking at one another while we’ve got so many other issues to deal with, stepping away from it ... and taking a deep breath to make sure when we go back to resume those discussions it’s with a clear head and the proper amount of reflection.” 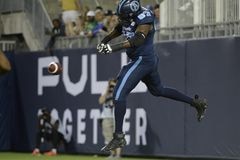 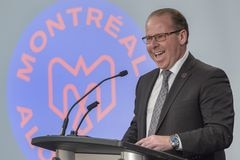 Alberta offensive lineman O’Donnell agrees to terms with Indianapolis Colts
April 25, 2020
Report an error
Due to technical reasons, we have temporarily removed commenting from our articles. We hope to have this fixed soon. Thank you for your patience. If you are looking to give feedback on our new site, please send it along to feedback@globeandmail.com. If you want to write a letter to the editor, please forward to letters@globeandmail.com.
Comments