There will be no pro football in Canada in 2020, but the CFL Players’ Association says it has tentatively secured its membership some financial help.

The union told players in an email Wednesday those under contract would be eligible for wage subsidy from July through December. The CFLPA added the benefits could go beyond that if the Canada Emergency Wage Subsidy (CEWS) is extended.

A CFL source said league teams will make applications to the subsidy program on their players’ behalf. The union added it is hoping to finalize matters in the next day or so.

The CFLPA also says CFL players will have their medical coverage extended through to the start of training camp in 2021.

Those are significant developments for CFL players. The league cancelled the 2020 season Monday after being unable to secure a $30-million, interest-free loan from the federal government.

The union also said CFL players in the final year of their deals can be released immediately if they wish. But those that are won’t be entitled to “the ongoing medical coverage.”

While the CFL did not secure a loan from Ottawa, it has been receiving government aid. Two sources familiar with the situation told The Canadian Press on Wednesday the league was to collect between $7-million and $9-million in wage subsidy from March to August. And if the program remains intact, that number could climb to as high as $12-million by year’s end.

One of the sources said if the CFL had staged a shortened ‘20 season, it was expecting to generate as much as $45-million in revenues. But even with that, the league was destined to incur substantial financial losses in 2020, expected to be at least $50-million.

“The fact is the federal government eventually chose not to fund the proposal it requested from the CFL for a return to play in 2020,” the league said in a statement. “It is also a fact the CFL and its clubs have participated in the wage subsidy program along with thousands of other employers.”

The CFL is one of many businesses accessing the wage subsidy program. The government says the CEWS has provided $27.53-billion in subsidies to more than 290,000 employers.

“While we regret we could not find a way to stage a season in 2020 in the face of COVID-19 and the loss of our No. 1 source of revenue, fans in the stands, we value our relationship with the federal government and provincial governments across the country and we have now shifted our focus to 2021 and our long-term future.”

CEWS is aimed at helping employers protect jobs and rehire by covering 75 per cent of an employee’s wages (up to $847 weekly) for businesses hit hard by the pandemic.

The funds for the CFL are reportedly earmarked to pay coaches, football and business operations staff.

The sources were granted anonymity because neither the CFL nor the federal government have divulged details of the loan request or CEWS information.

The CFL had repeatedly stated that money from Ottawa was required to salvage a shortened ’20 season. The inability to reach an agreement with the federal government was bitterly disappointing for many league officials, including Winnipeg Blue Bombers president Wade Miller, who was upset with how long the entire process took.

“I’m not sure if you don’t help in a pandemic, when you’re going to help,” Miller told TSN 1290 radio in Winnipeg. “When you work with the government for over four months, you think you’re going to get somewhere by the end, twice they asked us to come back in different ways and the federal government support never materialized.

“Nobody plans for a pandemic, so I would suggest nobody is in great shape. We’ll most likely figure this out on our own and come up with CFL made solutions is my guess.”

The CFL sent Ottawa the $30-million request Aug. 3 after asking for $44-million in July. In April, the league had presented the federal government a three-tiered financial-assistance proposal that began with $30-million immediately, more in the event of a shortened season and up to $150-million for a cancelled campaign.

Sources have said the $30-million request fell through when the assistance couldn’t be provided to the league under the terms it sought. And last month, the CFL ruled out a loan from the Business Development Bank of Canada because it felt the interest rate was too high.

Ottawa has maintained its willingness to help the CFL through existing programs and not league-specific funding. It’s an approach the government has already taken with Canadian businesses requiring assistance as a result of the pandemic.

“There are over 97,000 restaurants, bars and cafes facing the same challenge as the CFL, having their revenues plummet due to this pandemic,” said Liberal MP Bob Bratina (Hamilton East-Stoney Creek), who spent 20 seasons broadcasting Hamilton Tiger-Cats and Toronto Argonauts games. “Our government’s response has come in the form of programs such as the wage subsidy, CEBA and others accessible to businesses across the country.”

Following the CFL’s decision to cancel its season, Minister of Canadian Heritage Steven Guilbeault said the league did benefit from some existing government programs but never provided specifics.

“Our government helped the CFL navigate through the existing COVID-19 emergency response programs that are helping tens of thousands of businesses across Canada with revenue and liquidity challenges during this time,” he said in a statement. “Although the league was able to benefit from some of these programs, its board members ultimately made the decision not to pursue the upcoming season.” 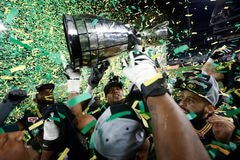