When Randy Ambrosie arrived in London, England, earlier this week, the CFL commissioner unpacked two key mission points – to engage in a global discussion on head injuries and to show the CFL is keen to be part of a solution.

Ambrosie and the CFL helped organize a multisport symposium that brought together medical experts and researchers to address the issue of concussions and patient care. The conference, which concludes on Saturday, was run by the CFL, the Australian (Rules) Football Association, World Rugby and the NFL, which is staging a regular-season game between the Seattle Seahawks and Oakland Raiders at Wembley Stadium on Sunday. Attending the symposium were representatives from the International Ice Hockey Federation, FIFA and the International Ski Federation, along with several other sports organizations.

The CFL attended an NFL-led injury conference in London in 2015, but this was the first time the Canadian league had donned a leadership role in sharing information on the treatment and prevention of concussions. On that front, the CFL has taken some significant measures to upgrade player safety, a key pursuit for Ambrosie, who played nine seasons as an offensive lineman with three CFL teams.

“We changed our schedule so we have more rest between games, no-padded practices [players work out wearing sweat suits and a helmet, no shoulder pads]. We’ve changed some of our rules to protect our players,” Ambrosie said. “We’ve seen a significant decline in the number of players who have gone on our six-game injured list so we have to think something is working. And we’re quite happy with that.”

Football, in general, has been under siege from physicians, scientists and others who state concussions lead to chronic traumatic encephalopathy, a degenerative brain disease that is said to result in depression, addiction and even suicide. Boston University’s CTE Center shocked the sporting world last year when it announced it had examined the brains of 111 former NFL players and found CTE in all but one.

But an emerging number of neurologists and pathologists have challenged such findings, pointing to study biases and the potential impact of pre-existing conditions as well as a lack of irrefutable proof. To this point, the evidence linking concussions to CTE has been labelled inconclusive.

Ambrosie’s assessment is that those opposed to collision sports feel football is playing down the concussion matter to save itself while putting its players in danger.

“People think we’re afraid of the truth,” he said. “We’re in search of the truth. We’re not trying to avoid anything. This is an exploration, not just by scientists but by the sports themselves.”

Ambrosie was asked how he felt about parents citing the risk of head injuries as the reason for not letting their children play tackle football. Dr. Bennet Omalu, who was the first to discover CTE in a former NFL player 16 years ago, has said, “When children participate in high-impact, high-contact sports there is a 100-per-cent risk of exposure to brain damage.”

This past February, two lawmakers tried to make California the first U.S. state to ban tackle football before kids reach high school. The Safe Football Act was met with such fervent resistance it was pulled four days before it was to be heard in the California State Assembly.

“If somebody feels their child shouldn’t play I’ll always respect that,” Ambrosie answered. “We all want to protect our kids. … The thing is this game is so important because when you take kids and put them on a football team, unlike any other sport in the world – big kids, small kids, medium-sized kids, tall, short, fast, slow – every kid can find a home on a football team.“

Along with its new role in the London conference, the CFL is embarking on a plan to export the three-down game. Ambrosie recently spent time in Mexico City meeting with various football teams to gauge the level of play and interest in tackle football. It’s part of the CFL 2.0 approach that is aiming to add global players to CFL teams in the hopes of developing new talent and perhaps landing a TV broadcast agreement. 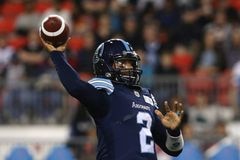 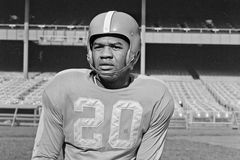 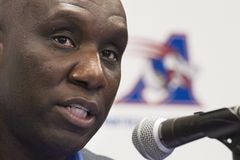