Should Connor Cook wish to kick-start his pro football career, the CFL could be a potential landing spot for the former Michigan State quarterback.

On Thursday, the Toronto Argonauts revealed Cook as one of 10 players on their 45-man negotiation list, as released by the CFL. That gives the club exclusive rights to Cook should he decided to play football in Canada.

The six-foot-four, 220-pound Cook was the winningest quarterback (34-5) in Michigan State history but since 2016 has bounced between four NFL clubs – Oakland, Carolina, Cincinnati and Detroit. Currently, the 26-year-old native of Hickley, Ohio, is a free agent.

Cook enjoyed a decorated career at Michigan State, being named the MVP of both Big Ten championship games he won. He also guided the Spartans to victory in the 2014 Rose Bowl – where he was the offensive MVP – and the ‘15 Cotton Bowl.

Cook was a first-team Big 10 selection in 2015. He also captured the Johnny Unitas Golden Arm award that year as the top senior or fourth-year quarterback in U.S. college football.

Cook left Michigan State as the school’s all-time leader in passing yards (9,194), TD passes (71) and total offence (9.403 yards). He finished tied with Kirk Cousins, currently with the NFL’s Minnesota Vikings, for the most 200-yard passing games (26).

In 2016, the Raiders selected Cook in the fourth round of the NFL draft.

Tom Flacco, a quarterback at Towson and the younger brother of Denver’s Joe Flacco, is on the Saskatchewan Roughriders’ list.

Shane Zylstra, a receiver at Minnesota State, remains on Edmonton’s negotiation list. Zylstra’s older brother, Brandon, had 100 catches for 1,687 yards and five TDs with the Eskimos in 2017 before cracking the Minnesota Vikings’ roster last year.

CFL teams can have up to 45 players on their negotiation list. Players can be added, or removed, at a team’s discretion on a first-come, first-serve basis.

Clubs own exclusive rights to those players so long as they’re on a negotiation list. Negotiation-list players often are a crapshoot for CFL teams with many never ever setting foot in Canada.

Last year, Hamilton confirmed that former Heisman Trophy winner Johnny Manziel was on its negotiation list. It was hardly a secret, given it was common knowledge the former NCAA star quarterback had been on Hamilton’s list since his days at Texas A&M.

Manziel eventually signed a two-year deal with Hamilton and began the ‘18 season with the Ticats before being traded to Montreal. He finished the year with the Alouettes and was expected back before being abruptly released Feb. 27 after the CFL determined Manziel had “contravened” terms of his contract.

The league also barred Manziel from signing with another CFL club. Manziel eventually landed with the Memphis Express of the Alliance of American Football before that league suspended operations in April.

Manziel, who was shown on social media this week doing commercials for an American auto insurance company, has expressed an interest in playing for the resurgent XFL next year. June Jones, the former Hamilton head coach who gushed about Manziel when he joined the Ticats, is now the head coach/GM of the XFL’s Houston franchise. 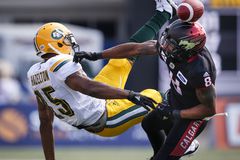 Vernon Adams Jr. and William Stanback both back at practice with Alouettes
Subscriber content
August 19, 2019 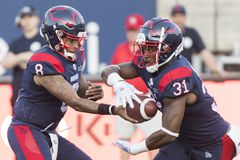