Saskatchewan head coach and general manager Chris Jones has been criticized for some of his tough staffing decisions and stubbornly sticking to a quarterback rotation. But there’s no questioning his acumen as a defensive co-ordinator.

The Roughriders defence registered five sacks and five turnovers in its 40-27 home win over Calgary on Sunday night. The win not only moved the Saskatchewan (4-4) into fourth in the West Division, it also knocked the Stampeders (7-1) from the ranks of the unbeaten.

What’s more, the Riders beat the Stampeders at their own game.

Quarterback Bo Levi Mitchell threw four TD passes but was sacked five times. He also fumbled once and had an interception Nick Marshall returned 67 yards for a touchdown.

Marshall, a former quarterback at Auburn, also had a three-yard TD run for the Riders while Matt Elam and Charleston Hughes both had two sacks apiece. Marshall became the first CFL player to score two different ways in a game since Winnipeg’s Milt Stegall had a 37-yard touchdown catch and 52-yard fumble return off a blocked punt July 15, 1999.

Hughes played 10 seasons in Calgary before being dealt twice – first to Hamilton then Saskatchewan – this off-season. He has a league-best 11 sacks, the sixth time Hughes has had 10-plus sacks in a season.

Saskatchewan quarterback Zach Collaros was a tidy 25-of-34 passing for 270 yards with no touchdowns or interceptions. The Riders also managed to run for 112 yards on 20 carries.

Saskatchewan also scored when Samuel Eguavoen blocked a Calgary punt, then returned it to the end zone.

The win was redemption of sorts for Saskatchewan, which fell behind 24-0 to Calgary on July 28 in a 34-22 loss at Mosaic Stadium.

Sunday’s game tightens things up in the West Division. Calgary still remains first but only two points ahead of Edmonton (5-3) and four in front of third-place Winnipeg (5-4). The Riders broke a fourth-place tie with B.C. (3-5).

NICE ROLL: Ottawa quarterback Trevor Harris was 29-of-39 passing for 361 yards and a TD on Friday night in leading Ottawa to a 44-21 road win over the Winnipeg Blue Bombers. It was Harris’s third straight 300-plus-yard game and followed a 487-yard performance in a 24-17 win over Montreal on Aug. 11.

Over that span, Harris has completed 100 of 128 passes for 1,229 yards with four TDs and two interceptions. Harris stands second over all in CFL passing with 2,735 yards, second only to Edmonton’s Mike Reilly (3,046 yards).

Running back William Powell registered his second straight 100-yard rushing game against Winnipeg with 106 yards and a TD. Powell also ran for 104 yards and the game-winning touchdown against Montreal and is the CFL’s second-leading rusher with 714 yards, 78 yards behind Winnipeg’s Andrew Harris.

LET’S GO TO THE EX: A season-high 18,104 spectators watched the Toronto Argonauts rally for a 24-23 win over the BC Lions on Saturday afternoon.

Ideally, Toronto would be able to ride the momentum of the two wins with yet another home date during the Canadian National Exhibition, which opened last week. That would give the Argos, which are averaging 13,881 fans at home, a terrific opportunity to attract more spectators to BMO Field.

Instead, Toronto visits the Montreal Alouettes (1-7) on Friday night before heading to Tim Hortons Field to face arch-rival Hamilton on Sept. 3. The Argos’ next home game is Sept. 8 against the Tiger-Cats.

HISTORIC EFFORT: Winnipeg’s Andrew Harris ran for 72 yards and a TD on 12 carries in the Bombers’ 44-21 loss to Ottawa on Friday night.

That gives Harris 7,060 career yards, making him the 12th player in league history to reach the 7,000-yard plateau. He’s currently tied with Jim Evenson for 12th in all-time CFL rushing. 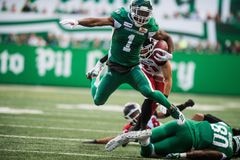 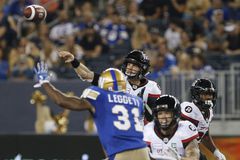 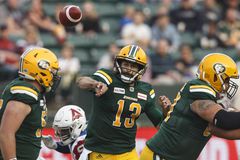