Being Tom Brady doesn’t sound like much fun. No alcohol. No processed sugar. No caffeine. No cooking with olive oil.

Maybe such a regimen will allow a man to live forever, but why would he want to?

However, it’s hard to argue with the results.

Long before they played Sunday’s Super Bowl, Brady was the consensus greatest quarterback of all time, but with an implied shrug.

Was he greater than the hard-charging he-men of football’s golden generation?

Was he his own player or one created by Bill Belichick’s system in New England?

It’s great and all that he’s still doing it with the best of them, but are we really saying he would have thrived in the modern era of highly mobile quarterbacks who can throw as well?

These were fair criticisms. Most of them were generated by watching Brady play for 20 years. He doesn’t look particularly big or tough (though he’s a lot bigger and tougher than you think). He doesn’t talk about the quarterback position like it’s molecular physics. Once he receives the ball, he doesn’t move around. Brady’s pocket instinct is so strong, he would stand in a burning kitchen until the fire trucks arrived.

His biggest disadvantage is that he makes his job – arguably the most challenging in professional team sports – look easy.

No scrambling. No circus throws. Even that stupid glove he wears on his non-throwing hand reminds you of a guy who carries his phone in a belt holster. Brady is the chartered accountant of football quarterbacks.

Another knock on him? Brady had never played against another truly great pivot in football’s championship game. With all due respect to the likes of Russell Wilson and Kurt Warner, and somewhat less respect to the Jake Delhommes and Jared Goffs, none of these are names that ring out in history.

There is no Ali without Frazier. Brady never found his Frazier. He wasn’t even lucky enough to get a George Foreman.

That left his legend propped up on a single number: six.

Six is a lot of Super Bowl wins, but there are more than six ways for people to explain to you how it could’ve happened to just about anyone with a little talent, luck and a coach like Belichick.

It’s only now that Brady’s decision to leave New England fully makes sense. As it turns out, Belichick hadn’t Frankensteined Brady. Instead, Brady had made a mediocre coach look like a Tamerlane of the gridiron.

Kansas City may have lost 31-9 Sunday, but it was Belichick’s reputation that took the real beating.

So, is Tom Brady great? Absolutely.

Best team athlete of his generation? Let’s not go wild.

That was from the perspective of Sunday afternoon. As we sit here Monday, it’s a lot harder to argue with any of those propositions.

In manhandling Patrick Mahomes, his presumptive heir in the best-ever discussion, Brady didn’t just win another Super Bowl. He atomized all the arguments against him.

One of the beauties of football is that the skillsets of its participants are so different. They may be playing the same sport, but they aren’t practising the same discipline.

New York Giants rush end Lawrence Taylor is probably the most terrifying defensive presence in the game’s history, but you couldn’t say for absolute sure that he could throw a football. Because you never saw him do it.

That makes it difficult to say which football player is better than any other. Is your dry cleaner better than your lawyer? At what, exactly?

Brady’s skillset is relatively limited. He is a remarkable passer of the ball and reader of the field. He operates well under intense pressure and threat of physical harm. He may also be the fittest 40-something alive.

Beyond that, there isn’t much. Compared to the colleagues arrayed around him, Brady isn’t fast or strong. We can’t say for certain that he is the smartest or the hardest-working. When they cue up the highlight reel of his impossibly long career, most of it will feature him flashing that Colgate-ready smile while covered in confetti.

What we will remember about Brady once he’s gone isn’t any particular play or victory. It will be that he was a winner. He had figured out life’s most difficult skill (and it is a skill): winning.

What Brady finally settled Sunday is that no football player has ever been more essential to a team. Wherever he goes, winning occurs.

His statistics are strong. Those numbers look even better now. His seven Super Bowls are more than any team has ever won.

But great players don’t necessarily equal great teams, over a great stretch of time. When they do – à la a LeBron James or a Cristiano Ronaldo – we put those players above all the rest. There are only one or two of them in a generation. Brady has now done it for two entire generations.

On Sunday, Brady found his Frazier. It wasn’t Mahomes. It was Tom Brady 1.0.

It was the New England Tom Brady who couldn’t quite get out from under the impression that a great mind had pulled him from obscurity and Eliza Doolittled him into a hall of famer.

Sunday’s Brady was Tom Brady 2.0, a Brady that is entirely of his own creation. He came out and beat the snot out of that old idea of himself.

You don’t often get to see an athlete of this stature rewrite his own legacy in the span of three hours. In fact, you never get to see that. And, apparently, it’s not over. Brady intends to return next year. He thinks he can play until he’s at least 45.

He is now indisputably the best there has ever been. All that’s left to determine is the full meaning of the question “Best at what exactly?” 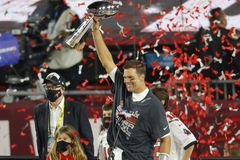 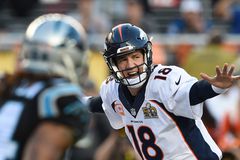