Donna Spencer
CALGARY
The Canadian Press
Published May 11, 2020 Updated May 11, 2020
Comments
Please log in to listen to this story. Also available in French and Mandarin. Log In Create Free Account

Michael Labinjo’s family is struggling to make sense of the ex-CFL player’s death, now considered suspicious by the Calgary police.

The former Stampeders defensive lineman was found dead in his Calgary home Sept. 21, 2018 at the age of 38.

Labinjo’s death wasn’t considered criminal in nature at the time. However, the theft of several items and sports memorabilia from Labinjo’s residence, plus security video footage from the building the morning of his death, prompted the Calgary Police Service to open investigations into both the theft and death.

“Through testing with the medical examiner’s office and through other information that we’ve received, we’ve now looked at the totality of circumstances surrounding Michael’s death and are investigating this as a suspicious death,” Staff Sergeant Martin Schiavetta said Monday at a news conference.

“What we’re trying to determine is if Michael’s death was intentional and if that intentional death was used to facilitate the theft of his personal items.”

The police have released photos captured from the video to the public and is asking for information to identify four suspects. Among the items taken were a pair of championship rings, including Labinjo’s Grey Cup ring.

Labinjo appeared in 44 games for the Stampeders between 2007 and 2010 and won a Grey Cup with the team in 2008. The Toronto native worked in Calgary following his release from the Stampeders in 2011.

“To all who knew Mike, he was caring, kind, gentle and a loving person,” his younger brother Randy said at the news conference. “When I lost him, I lost a part of myself that I can never regain.

“Mike loved his daughter Hailey. She was his world. Hailey now has to grow up and experience things without Mike in her life. I can’t imagine how hard this has been and will continue to be for her. My heart breaks for her.”

Randy Labinjo says his mother Margaret is devastated at the loss of her oldest child.

“He was a gentle soul, a hard-working, kind young man who knows how to put a smile on anyone’s face if they’re not having a good day,” Margaret said. “That is who Michael was.

“Michael, you did not deserve to die this way. I am going to make sure whoever did this to you are held responsible. I will fight to the end for justice to be served.

“If anyone has information about my son’s death, please pick up the phone and call the Calgary police and let them know. If you are in any way responsible for what happened to Michael, please, I’m begging you, turn yourself into the Calgary police.”

He was drafted in the third round by the Calgary Stampeders in 2003.

Labinjo didn’t join the Stampeders until 2007 because he played 10 NFL games with the Philadelphia Eagles and Indianapolis Colts.

He was an impact player for Calgary in the 2008 Grey Cup with three pass knockdowns, a sack and three tackles in a 22-14 win over the Montreal Alouettes.

The six-foot, 241-pound defensive end had eight tackles, three quarterback sacks and a forced fumble in Calgary’s 22-18 win over the B.C. Lions in the West final that year. 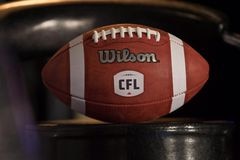 Kansas City to open against Houston as NFL releases schedule despite pandemic
May 8, 2020 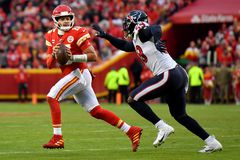 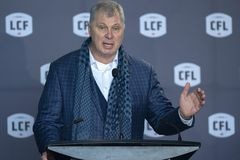