In late June, the sleepiest part of the NFL calendar, several of the sport’s most prominent minority coaches and executives gathered at Morehouse College in Atlanta to try to dispel a persistent football myth: that there are not enough qualified candidates of colour for the league’s coveted offensive coaching jobs.

At the event, known as the Quarterback Summit, about three dozen aspiring candidates for such jobs heard from seasoned professionals such as the former Indianapolis Colts and Detroit Lions head coach Jim Caldwell, Kansas City Chiefs offensive co-ordinator Eric Bieniemy and other African-American coaches and executives, past and present. The coaching prospects – young men of colour who have shaped offences at various levels of the sport – also got to network. They discussed how to develop quarterbacks. They taped mock interviews.

The Quarterback Summit, organized by the NFL and held for a second straight year, took on a new urgency when the number of minority head coaches and general managers plummeted by half (from eight to four and four to two, respectively) in the 2019 off-season, reversing years of progress.

Recently, the main avenue to head coaching jobs in the NFL has been experience guiding an offence, a role in which minorities have been underrepresented. Among the 32 teams this season, there were two African-American offensive co-ordinators and 10 defensive co-ordinators.

The summit “was birthed out of looking at the last few hiring cycles, and the appetite for offensive coaches,” said Troy Vincent, the NFL’s executive vice-president of football operations. “When you look at the demographics, it’s embarrassing.”

After every NFL season in recent years, as clubs fired coaches and top executives, the league – in which about three-quarters of the players are African-American – has come under fresh scrutiny over how few minorities are hired to fill those spots. In November, Richard Lapchick, the director of the Institute for Diversity and Ethics in Sport, issued his annual report on the hiring of women and minorities in the NFL and gave the league its lowest grade since the institute began tracking these data in 2004.

“We’re celebrating the 100th anniversary of the NFL, yet we have only three head coaches of colour,” said Rod Graves, a former NFL general manager and league executive who now runs the Fritz Pollard Alliance, which promotes diversity in football. “For all the hoopla that football has become in this country, that kind of progress, or lack of, is shameful.”

As Graves noted, the December firing of Carolina Panthers coach Ron Rivera, who is Hispanic, brought the number of minority head coaches to three – Mike Tomlin of the Pittsburgh Steelers, Anthony Lynn with the Los Angeles Chargers and Brian Flores with the Miami Dolphins – down from a record eight, in 2018 and other years. (Perry Fewell, who is African-American, replaced Rivera, but only on an interim basis.) There are just two general managers of colour.

The Panthers are not the only team looking for a head coach. As the regular season ended on Sunday, the Browns fired Freddie Kitchens after his first year in Cleveland, and on Monday the New York Giants fired Pat Shurmur, who lasted two seasons. Washington is in search of a coach as well as a team president to replace the recently dismissed Bruce Allen.

Vincent, Graves and other leaders at the summit have recognized that the emphasis on offence, and on promoting coaches who call plays and develop quarterbacks, has limited opportunities for minorities.

For years, African-American coaches have​ ​had an easier time being hired for defensive jobs, their roles apparently circumscribed by the kind of stereotypes ​that have long steered black players toward defence and away from certain offensive positions – quarterback, in particular, but also tight end and the offensive line.

In addition to the scarcity of minority offensive co-ordinators this season, there were only two African-American coaches for quarterbacks – despite the growing impact of black quarterbacks in the league – plus five for tight ends and one for offensive linemen.

The Quarterback Summit is just one of the efforts to increase diversity in NFL coaching and front-office jobs. In 2003, the NFL introduced the Rooney Rule, which requires that each club interview at least one minority candidate from outside the organization when trying to hire a head coach, assistant coaches or senior executives in football operations. Named after the long-time Steelers owner Dan Rooney, the rule was intended to help fix the racial imbalance, but the number of minority head coaches at any given time has never topped eight and the league has rarely penalized clubs for violating the rule.

Despite a stated goal of broader diversity, the NFL does not set quotas for its teams; each franchise owner decides who fills the top spots on his or her team. So while 28 per cent of management jobs at the league headquarters belong to people of colour, the representation among the teams’ top front-office executives is 11 per cent, a statistic that earned a failing grade from Lapchick.

“If we’re going to have any sustainability in terms of diversity, we have to focus on diversity of leadership,” Graves said. “We have a lot of work to do.”

Some teams have recognized that becoming more diverse made them better on the field. A half-century ago, the Steelers hired an African-American scout, Bill Nunn Sr., and he found players at overlooked historically black colleges and universities who helped the team win four Super Bowls between 1974 and 1980.

“Every metric that you could use, these players outperformed their peers,” said Jim Rooney, who recently completed a book on his late father’s work. “It gave Dan an appreciation of talent pools that were overlooked and can give you an advantage.”

The NFL has tried to build a pathway for minority coaches through the Bill Walsh NFL Diversity Coaching Fellowship, which is named for the late San Francisco 49ers head coach. Since Walsh started the program in the 1980s, nearly 2,000 developing coaches have had internships with NFL teams during off-season workouts, minicamps and training camps. But as the college football season has expanded and the NFL has reduced off-season workouts, the number of days available for such internships has declined.

Four years ago, Bruce Arians decided that more opportunity was needed. Then the Cardinals head coach, he approached Arizona’s executives about setting up the Bill Bidwill Coaching Fellowship. Named after the team’s late owner, the fellowship pays former players who are from minority groups to coach for up to two years.

“We have to make sure we’re doing everything we can do to build a pipeline of play callers and quarterback coaches, who will eventually get to offensive co-ordinator and head coach,” said Michael Bidwill, the son of Bill Bidwill and the current owner of the Cardinals. More than a dozen other NFL teams have since established similar fellowships.

When Arians was hired as the Buccaneers head coach before this season, Leftwich moved to Tampa Bay. The team is the first to have African-American coaches as offensive, defensive and special teams co-ordinators, and 11 of its 30 coaches are minorities.

“It’s the guys you know and trust, people who haven’t gotten opportunities who deserve them,” Arians said. “Our job as coaches is to create that next generation of coaches.”

Arians looks forward to the day when hiring minorities is not exceptional. For that to happen, there must be more diversity in offensive roles lower on the organizational chart, starting with quality control coaching. Pep Hamilton, the head coach of the D.C. Defenders of the XFL who was an assistant with four NFL teams, calls that job a “springboard.”

“You can’t teach experience,” Hamilton said. “Ultimately, you’re either prepared or not.”

NFL and Colin Kaepernick still at odds on several fronts over workout that was changed
Subscriber content
November 24, 2019 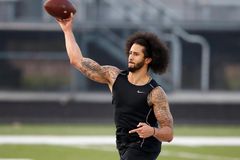