The Montreal Alouettes held off a late Toronto comeback attempt to beat the Argonauts 28-22 Sunday, in a contest that featured a spectacular play that coach Khari Jones says he called in a previous Touchdown Atlantic game eight years ago.

The Als managed to pull off a double reverse that saw quarterback Vernon Adams eventually hit wideout Quan Bray with a 34-yard touchdown pass deep in the Toronto end zone – one of several big plays that proved the difference before an announced crowd of 10,126.

Jones said he used the play as an assistant coach with Hamilton when the Tiger-Cats beat Calgary 55-36.

“Kevin Glenn threw it to [Marcus] Thigpen and got it to the one-yard line at the same end zone and we eventually scored in that game,” he said. “It was the right time to do it, I felt, and made the call and luckily it worked out again. It was pretty neat to do it in Moncton again eight years later.”

Despite the big plays from both sides, it all came down to the last play of the game when the Alouettes (5-4) managed to break up a short goal-line pass by Argos quarterback McLeod Bethel-Thompson.

The outcome was a bitter pill to swallow for Bethel-Thompson, who engineered a final drive win against Winnipeg earlier this season. With the loss, the Argos (1-8) are mired in the Eastern Division basement.

“The season can’t get much harder. I think we’ve lost every way possible,” a frustrated Bethel-Thompson said.

“The universe has got a really hard road in line for us, so this one hurts probably more than any other loss we had this season.”

The decisive play for the Alouettes came on a 25-yard fourth quarter touchdown run by running back Jeremiah Johnson.

It came after the Argos had regained the lead before the end of the third quarter when Bethel-Thompson hit wide receiver Derel Walker with a 38-yard touchdown pass.

The play by the Argos had appeared to stem Montreal’s momentum after the Alouettes sprung in front on the double reverse touchdown pass. This, after the Als had opened the second half with an Adams 60-yard bomb to Eugene Lewis to narrow the Argos lead to 16-13.

The Argos, who were desperate for a win, played like it in the first half, emerging with a 16-6 lead.

Toronto scored the only points of the first quarter through a 39-yard field goal by kicker Tyler Crapigna.

With Toronto up 16-0, the Alouettes responded with a five-play 75-yard touchdown drive that included a 40-yard pass completion to wide receiver DeVier Posey. Adams was eventually able to run the ball in for a touchdown before the Alouettes missed the two-point conversion, making the score 16-6.

The Argos missed a golden opportunity to extend the lead near the end of the half when Bethel-Thompson fumbled a snap outside the Montreal goal line that was recovered by the Alouettes.

“They controlled the clock,” Jones said of the Argos play in the first half.

“Fortunately for us, we came out in the second half and we had a big play right at the beginning and that set the tone for us.”

Although promoters predicted a near sellout, there were patches of empty seats on both sides of Croix-Bleue Medavie Stadium on the University of Moncton campus.

The game was sponsored by Schooners Sports and Entertainment (SSE), the business group trying to land a CFL franchise in Halifax.

“I think everything is a learning curve,” Bowser said. “Halifax is where we are looking to put the stadium. We are playing in Moncton because there is a stadium here and we are trying to generate as much interest as we can from the Atlantic region.”

CFL commissioner Randy Ambrosie said both he and the league owners continue to back the business group.

“The thing I love about these guys is they have just been sticking to it,” Ambrosie said. “I am personally committed to this ownership group wanting to see this happen.”

It was the fourth time Moncton has hosted a CFL regular-season game. 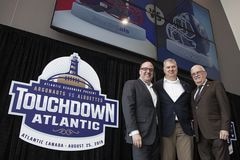