Like wartime for its military counterpart, the Sports Media Industrial Complex is most apparent around a pro draft.

Drafts are not sports. They’re ancillary to sports. They are what paperwork is to Law & Order – and you wouldn’t spend an hour of your life watching Briscoe and Logan type out their case notes.

But drafts allow the SMIC to wheel out its entire psy-ops arsenal. That largely amounts to guessing at great length about things based on next to no information, until the assorted guesses co-mingle into something that looks like facts.

(I assume this is how war works as well.)

As a reporter, you cannot take wild, on-the-record guesses about the pros or a pro team. The pros and the teams don’t like that. And will generally tell you so.

But when you are dealing with kids stuck in the limbo between school and work, you can fill your boots with the purest, most pointless speculation. What are they going to do? Complain? That only sets off another cycle of torture as the complaining becomes a story. This misery-go-round has become the reason ESPN exists.

This helps explain why Kyler Murray has become such a thing all of a sudden.

A lot of stuff happened in sports last week – LeBron James retired early (sort of), the Phillies made Bryce Harper a de-facto co-owner, Ted Lindsay died – but Murray was the focus of attention down south.

Murray, the Heisman Trophy winner, is the hipster choice to be chosen No. 1 in the coming NFL draft. He also plays baseball well. Twenty years ago, this would have been a simple-to-tell, good-news story – young guy does many things well, will do them for your entertainment.

The mood has soured since then (seriously, the ‘10s have turned into the affectless ‘90s, minus the drugs and off-hours fun. Every single thing is a serious issue to be treated seriously. Even things that were purpose-designed to be unserious, such as sports.

Murray’s first mistake was treating his forthcoming occupation like a job. While still a student at Oklahoma, he agreed to take a US$5-million signing bonus for the Oakland A’s. So he was a baseball player.

As it turned out, Murray was even better at that. So he told the A’s to stuff it, agreed to give them back their money and declared for the NFL draft.

Murray made a business calculation – he can earn nothing over the next few years in baseball’s minor leagues, or earn a ton right now playing football. He made the right choice.

However, it wasn’t the romantic one. He’s not doing it for the love of the game. And he has tapped every right thinker’s least favourite league – the NFL – as his destination. An unapologetic capitalist without the right progressive CV? Suspect.

As such, Murray didn’t get the benefit of a media pre-soak. He was dropped directly into the rinse cycle. First off, the mystery surrounding his height.

How this is a mystery confounds me. Everybody can see him, can’t they? They’ve seen him quite a bit, on a football field, throwing a football, and very obviously not doing it in high-heeled running shoes.

But since Murray has made himself a target, and the SMIC needs something to obsess over, Murray’s height became an issue. ESPN devoted the better part of a full day of coverage to the subject.

Murray was measured at the NFL combine. He is 5-foot-10 and one-eighth of an inch. This was apparently good news. Why? I have no idea. Had he been a quarter of an inch shorter that would apparently have been bad news. Again, no idea.

Anonymous NFL types began feeding data into the SMIC – it was now okay for Kyler Murray to be drafted first overall. That half-centimetre makes all the difference.

The next profitable hurdle to spend hours of sports-talk TV straddling is Murray’s attitude. Does he have one? Is it commendable? Or surly? Does he talk? Too much? Or just enough?

I thought the idea here was to run around a bit and throw a football good. But because that is too easy for the rubes to figure out – they can judge a decent spiral as well as anyone – the SMIC must resort to psychology. It’s obscure and offers more angles of intrusion.

Former NFL GM and current NFL Network analyst Charley Casserly hit an attention jackpot by declaring that Murray had failed (if such a thing is possible) his team interviews during the combine.

“Leadership? Not good. Study habits? Not good. The board work? Below not good,” Casserly announced in an interview, causing general, delighted panic.

Leadership not good? How would you determine that in a job interview?

“Mr. Murray, let’s play a game. You have two minutes to convince the offensive coaching staff that Russia can, in fact, be defeated in a winter war. Go.”

And the “board work” – did someone ask him to draw a tetrahedron and he gave them a triangle instead? The guy won the Heisman Trophy. It is a fair assumption that if you tell him, “You are X in this play,” he doesn’t answer, "Why can’t I be an O?'

By Friday, all this nonsense had metastasized into a conspiracy theory about Murray’s height measurement – that it had been inflated at the combine and could only be truly verified at his coming NFL Pro Day.

That won’t happen until Wednesday (live broadcast, naturally). So the networks can now fill five glorious days of broadcast holes with three guys screaming at each other about whether Murray will allow himself to be re-measured.

Occasionally, you look out across the North American sports landscape and think, “Is this it? Is this the moment everything tips over into farce and the decline begins?”

You would think it would be the money that did it, or the fact that sports leagues have become proxy armies in the culture wars. That people would tire of the circuses – at least, as currently constructed – because they had butted up against current events in some meaningful way.

But the Murray saga, and the way it is being interrogated with more zeal than any actual problem or mystery besetting western society, convinces me that sports are safe for the immediate future.

Where they were once an attraction – as in, having a beer and watching the game – they have become an all-encompassing distraction. The only way to keep up with all of this stuff is to completely ignore everything else that’s going on.

The real brilliance of the SMIC was figuring out that while only some people enjoy going to church, everybody likes arguing about religion. 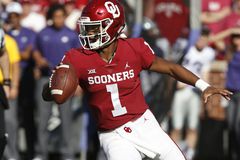