It’s been a meteoric rise for Jordan Williams.

Last month, the linebacker came into the CFL’s Ontario regional combine well under the radar, just thankful for the chance to be seen after last playing a meaningful game in 2017 at East Carolina University. Roughly six weeks later, the 5-foot-11, 219-pound Williams is being touted as a potential first-overall selection in the league’s Canadian draft Thursday night.

“It’s crazy how much stuff has changed from then,” Williams said. “I’m not going to sit here and act like, ‘Oh no.’

“It does feel good. But in the grand scheme of things, I’m going to still have to put on the pads, strap it on and make tackles.”

Williams was East Carolina’s second-leading tackler in 2017 with 89 – including three for a loss – with a forced fumble. He also impressed at the combine, the CFL’s final due to the novel coronavirus outbreak, posting a 40-yard dash time of 4.48 seconds, 20 reps in the 225-pound bench press, 39-inch vertical jump and broad jump of 10 feet 8.5 inches.

The 27-year-old also ran the three-cone drill in 7.09 seconds and shuttle in 5.2 seconds. An American by birth, Williams was deemed a national for the draft because his mother is Canadian.

“He can run sideline to sideline. He’s an excellent prospect.”

Calgary has the first pick overall Thursday, although Hufnagel said he would listen to any offers for it. If Hufnagel holds on to the selection, Williams would seem to be a good fit with the Stampeders.

Fate is also enhancing Williams’s draft stock as six Canadian-born prospects will begin their pro careers south of the border.

All six are expected to be drafted Thursday, but more as future picks. Hufnagel knows all about that, taking a flyer on former McGill offensive lineman Laurent Duvernay-Tardif, currently with the Super Bowl-champion Kansas City Chiefs, in the third round, No. 19 overall, in 2014.

“You try to talk to some people involved in that (NFL) organization about how much interest is there,” Hufnagel said. “Obviously the amount of money, if any, is an indication of how strong that NFL team’s interest is and you’ve got to make an educated guess, and that’s all it is.

“Obviously, Laurent has had a very very nice career at Kansas City. Would I be a little bit more upset with myself if I picked him in the first round? Most likely. As a third-round pick, it was a good gamble.”

Last year, the Ottawa Redblacks offered Williams a practice-roster spot after he attended one of the club’s free-agent camps. But upon learning of his mother’s nationality, the club recommended Williams investigate getting into the league through the draft. Had Williams accepted Ottawa’s invitation, he would’ve been registered with the CFL as an American and his status couldn’t have been reversed afterward.

Hufnagel said the Stampeders have narrowed down their options at No. 1 to two or three players and expect to make a final decision leading up to the draft. Regardless of who’s selected first overall, that player’s contract will cover three years with a maximum salary of $80,000 annually as per the league’s collective bargaining agreement.

However, all Williams – who had a 2018 tryout with the NFL’s San Francisco 49ers – wants is an opportunity to play pro football.

“Five years ago I was probably barely cracking the starting lineup at East Carolina.”

Toronto will make the first of four picks in the top-20 at Not. 2. The Argonauts will select again at No. 9 (last pick of first round secured from Winnipeg in Zach Collaros trade last October) then in the second round at Nos. 11 and 20, respectively.

The East Division-champion Hamilton Tiger-Cats also have two first-round picks. Their first selection is at No. 5, acquired from Montreal in the Johnny Manziel trade, with the second coming at No. 8. U of T associate professor not optimistic CFL will get government funding
Subscriber content
April 29, 2020 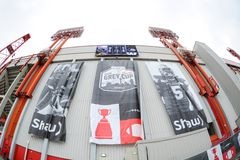 CFL asks federal government for up to $150-million in financial assistance
April 28, 2020
Report an error
Due to technical reasons, we have temporarily removed commenting from our articles. We hope to have this fixed soon. Thank you for your patience. If you are looking to give feedback on our new site, please send it along to feedback@globeandmail.com. If you want to write a letter to the editor, please forward to letters@globeandmail.com.
Comments