Save the outrage for something else. NFL officiating won’t get any better this weekend, or any time soon – because it can’t.

We shouldn’t have to remind people at this late date that nobody is perfect, but there you are. Besides, officials are a lot closer to that standard than the players and coaches. You can look it up.

So consider this a public-service announcement – or else a cry for help – for the people dressed up like zebras. Because they’re barred from speaking out in public and the league’s higher-ups are too tight-fisted and conflicted to do it themselves.

“I think the officiating community feels like it’s under attack,” said Dean Blandino, a Fox Sports rules analyst who was NFL vice-president of officiating from 2013-17.

“They were under intense scrutiny before. I know that firsthand. But with the advent of social media, all the other platforms and all the talking heads on TV – myself included – this season feels a little more intense.

“And frankly,” Blandino summed up, “I didn’t think it was possible.”

Referees know going in they’ll never get their due, but there’s some consolation. In the league’s 100th anniversary season, despite a glitzy ad campaign, game plans as detailed as an MRI and players so swift and strong they take your breath away, all anybody wants to talk about is officiating.

“Let’s say you volunteered to be a ref, because you think it’s noble or maybe just to help out in your kid’s league,” said Mike Pereira, another Fox rules analyst and one of Blandino’s predecessors as VP of officiating.

“On Day 1, you’re berated by parents from the sideline, or chased off the field, and then asking yourself, ‘Who needs this?’ " he sighed. “And people wonder why there’s a shortage of officials.”

Try thumbing through the NFL rule book some time to determine what constitutes a catch. After several controversial “was-it-or-wasn’t-it” calls – alternatively known as “the Dez Bryant play,” “the Calvin Johnson play” or “the Jesse James play” – the NFL’s competition committee overhauled the rule in 2017, but the debate still simmers.

That hardly stopped the league from dipping a toe into even-murkier waters this past off-season and tackling the even more-subjective question of what constitutes pass interference. The impetus was a blown call in the 2019 NFC championship game, when Rams cornerback Nickell Robey-Coleman mugged Saints receiver Tommylee Lewis before the ball arrived and got off scot-free.

Except the committee didn’t bother changing the wording of the pass interference rule; it simply tacked on a layer of instant replay. Unfortunately, no matter how much technology you insert between the two, so long as humans make the first decision and the last, it’s still a judgment call.

“Instant replay was already there when I got the job in 2001,” Pereira said, “and I was a big proponent. But now, I think it’s actually hurt the game.

“It was brought in to determine facts and locate the ball – what we called ‘lines, ground and planes.’ The league took one big step into judgment when it allowed replay to decide what’s a catch. Now there’s another, and that’s blown up, too.

“Maybe,” Pereira concluded, “we should have stopped with lines, ground and planes.”

“I hate to even reference that [NFC championship game] play, but the new rule seemed like a knee-jerk response, like they never got around to vetting the unintended consequences.”

For the first two-thirds of the season, coaches burned challenges, broadcast crews shrugged and fans raged when more pass interference calls weren’t forthcoming. Meanwhile, league officials – both on the field and in the replay booth – struggled to defend what was always going to be a judgment call. And not just once, but often twice, and sometimes differing judgments.

Then, even as the furor was dying down, Seawhawks tight end Jacob Hollister and 49ers linebacker Fred Warner got tangled up in the end zone in the final regular-season game – on the second-to-last-play – with the seeding order of the NFC hanging in the balance. It was exactly the kind of play the new rule was put in to decide.

But there was no call on the field and Al Riveron, the league’s third officiating chief in the past eight years, looked at it on a screen in New York and deemed it not worth a formal review. Twitter erupted again, and this time, even Hall of Fame coach and current NBC analyst Tony Dungy piled on.

“Still shaking my head at non-Pass Interference call in the last minute of the 49ers-Seahawks game. NFL Office put us through a season of inconsistent reversals but this is what the rule was supposed to fix-missed call that impacted playoff spots of 4 teams. Why have review??”

“Here’s the funny thing,” Pereira said. “After all the fuss, if you go back and look at Week 17, I’d say it was the best week the officials had all season. Then along comes that next-to-last play.

“We almost made it all the way through,” he said, then paused. “Almost.” 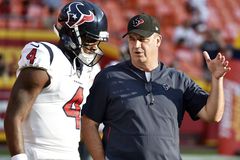 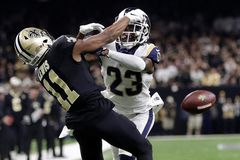 Pass interference can now be challenged and reviewed thanks to NFL rule change
March 26, 2019 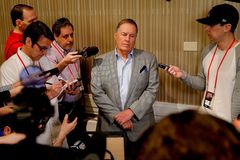