One week after signing their new No. 1 quarterback to a two-year deal, the Ottawa Redblacks introduced Nick Arbuckle to the media Friday morning.

Not that he needed an introduction.

An injury to Calgary starter Bo Levi Mitchell opened the door last season for Arbuckle, and his good showing allowed him to step out of the back-up role in Calgary and into a starting role with the Redblacks.

“My wife [Zakiyyah] and I are really exciting to be coming to Ottawa and making this place home,” Arbuckle said Friday. “I also really want to send thanks to Calgary and [President John] Hufnagel and coach [Dave] Dickenson for giving me the opportunity to be in the league and get started.”

“A really special thanks, too, to a guy named Kyle Carson, who was a scout for Calgary. He was the first guy that believed in me and saw something in me and contacted me when I was done playing college football. He was someone that saw potential in me probably even before I did. He kept fighting for me and if it wasn’t for him, I wouldn’t have this opportunity.”

“Giving up a third-round pick and swapping first round picks is not something that we feel is going to impact us negatively,” Redblacks general manager Marcel Desjardins said. “We’ve drafted pretty well in the past in the later part of the first round.”

Arbuckle made eight appearances, including seven starts, while Mitchell was injured last season. He completed 174 of 238 passes for 2,103 yards and 11 touchdowns.

He had a 9-for-9 performance for 93 yards and a touchdown in a Week 3 victory over the B.C. Lions when Mitchell suffered a pectoral injury. Arbuckle threw just one pass after Mitchell returned to the starter’s role in Week 12.

The 26-year-old Arbuckle and his wife are expecting their first child in May, and Arbuckle was proudly sporting a pink ribbon on his shirt.

“I got this ribbon for the baby shower we did. My cousin got it for me and now it’s part of my daily wardrobe,” he said. “It says ’Daddy To Be.’ My wife has the belly to indicate she’s going to be a mom so I felt like I needed something too.

“When it came down to the decision of signing and where we wanted to be, it was definitely both me and my wife’s to choose. It was where we were going to start a family, so it was a big part of it.”

On the field, Arbuckle will be tasked with turning around a train-wreck 2019 season for the Redblacks, who went 3-15 and missed the playoffs for the first time since their inaugural season in 2014.

“I don’t feel pressure, per se. I just feel a lot of confidence in what I’m able to do myself on the field and what I can bring to a team,” Arbuckle said. “That confidence comes from the work that I put in and that’s what I’ve always tried to build myself on, knowing that no one can outwork me, that no one is more prepared for the moment than I am.”

Arbuckle said he enjoys Ottawa’s fans and he is looking forward to playing for the Redblacks instead of against them.

“I’m really excited. I’ve seen these fans, especially two years ago when we played here and the Redblacks had the Grey Cup season and we ended up playing you guys in the Grey Cup,” he said. “It’s a really cool and incredible place to play, so to be on the other, better end of it is great.”

“I’m not really the person that leaves the hotel and goes out and does things before the game, but whenever we came to Ottawa, I’d want to walk around, go to a restaurant, see the mall, the canal. Since I was starting last year, I got a chance to see more of the stadium and the pre-game media, so this was a place in Canada that I really like going to and I wanted to take my wife to. It’s cool that everything fell into place.” 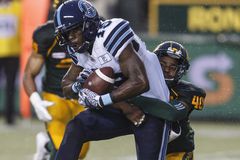 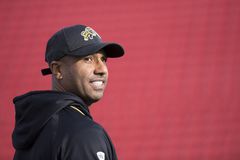