Head coach Rick Campbell has parted ways with the Ottawa Redblacks amid the fallout of a dismal season, and what appears to be a deteriorating relationship with general manager Marcel Desjardins.

The Redblacks announced Monday morning that Campbell had decided to leave with CFL club with one year remaining on his contract.

Ottawa finished last in the CFL standings this season, with an overall 3-15 record after losing numerous players to free agency. The team also dealt with a number of injuries, while other players didn’t live up to the potential expected from management.

“My best way to phrase it is I didn’t think the status quo was best for the Redblacks going forward, and decisions were made from there,” Campbell said of his departure.

“I really didn’t like it when people left here with a bad taste in their mouth,” he added. “The list was getting a little long and ... I’ll leave it at that.”

Desjardins said he was caught off guard by Campbell’s decision.

“[Campbell] did not think that our relationship was good enough for him to want to continue in this arrangement,” Desjardins said Monday. “That’s his opinion. The relationship has been the same since day one, but obviously the stress of this season must have played a factor in that.

Campbell denied that a personality conflict with Desjardins factored into his decision.

“I do not dislike Marcel,” Campbell said. “It’s not about that. Sometimes relationships have to jive and to be able to communicate well, and sometimes when you don’t have that, it makes things tougher. I have to put it on me, too, because I have to be a better communicator.”

Campbell, who was hired by the Redblacks on Dec. 6, 2013, leaves his first head coaching position with a 44-62-2. The only coach in club history led the Redblacks to the Grey Cup final in three of the past four seasons, winning the title in 2016.

Players had often expressed how much they liked playing for Campbell, and news of his departure came as a shock.

“I’m very, very surprised,” said veteran receiver Brad Sinopoli, who recently signed a two-year contract extension. “I loved playing for Rick. Days like this are a tough part of the business. This was not what I wanted to wake up to.”

The decision didn’t come easily to Campbell, who embraced being part of the Redblacks community.

“I know it feels like the right thing,” Campbell said. “I wanted to be really sure because it’s been a long year with a lot of losing that I wasn’t being rash or overly emotional making a poor decision. It wasn’t like a power play or anything like that. It was just making sure I’m completely in and everybody pulling in the same direction and making it a fun, great place to work, and for me that was slipping, but that’s on me.”

The 48-year-old choked back tears as he spoke of the players and the special moments he enjoyed as head coach, most notably the Grey Cup parade in 2016.

Campbell will be paid the final year of his contract, but will also be free to pursue other opportunities.

At no time did Campbell give Goudie the ultimatum that it was him or the GM.

“If you know Rick, he’s not that dude,” Goudie said. “We had a conversation that was more about Rick, and at the end of the day what he could and couldn’t do.”

Desjardins said the priority is to hire a new head coach before Christmas. He said he will be looking for someone with CFL experience, but not necessarily head coaching experience.

The remainder of the Redblacks coaching staff is under contract until December, but have been told future jobs will be contingent on the new head coach.

With Desjardins in the final year of his contract, it may be more difficult to attract a new head coach, who may feel job security could be threatened.

“I understand it’s a little bit unorthodox, but that’s just the road we’re going to go right now,” Goudie said. “I think as the blueprint starts emerging for next year, we’ll figure out what that looks like. We have a stable organization so I can participate in the process from giving somebody comfort in what our organization is all about.”

In addition to a new head coach, the Redblacks will look to add an offensive co-ordinator to its staff as they chose not to replace Jaime Elizondo after he left the team in April to pursue other opportunities.

Desjardins said the team will also look to bring in another quarterback and would likely be more active in the coming free-agent market.

A quarterback will not be signed until a new head coach is in place, as Desjardins wants the coach to have input on the signing. 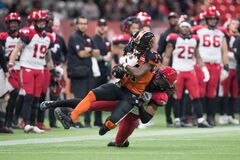 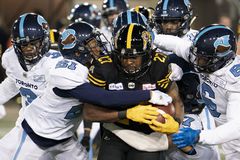 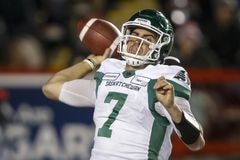