Canadian receiver Chase Claypool is surprised to be a Pittsburgh Steeler.

The Steelers selected the former Notre Dame star in the second round (49th overall) of the NFL draft Friday night.

“That would’ve been my last chance,” Claypool said during a conference call. “But that’s how it goes.”

Claypool is the highest Canadian taken since 2011. Baylor offensive lineman Danny Watkins, a native of Kelowna, B.C., went in the first round (No. 23 overall) to the Philadelphia Eagles and Toronto native Orlando Franklin was selected in the second round (No. 46 overall) by the Denver Broncos out of the University of Miami.

“I am very excited about this opportunity to work with him,” Steelers offensive co-ordinator Randy Fichtner said of Claypool on Pittsburgh’s website. “He is one of those rare types of a combination of size and speed.

“There is no job too small. He will block. He volunteers for special teams. This guy is a football player. He has a lot of unique traits for the position. A lot of things to be really excited about. Gives you a potential red-zone threat. He is an outside position player first and gives you the option of playing in the slot as well.

“He wins an awful lot of one-on-ones. I have never seen him not win a one-on-one type play.”

A second Canadian also was taken Friday, the second day of the three-day draft. Ottawa’s Neville Gallimore, a defensive lineman at the University of Oklahoma, was the 18th player taken in the third round, No. 82 overall, by the Dallas Cowboys.

“In Neville Gallimore, I will tell you one word: vertical,” former NFL defensive lineman Booger McFarland said on the draft telecast. “He wants to get up the field.

“If you double-team him, he knows how to get off and chase sideline to sideline. But in this new defensive scheme that (defensive co-ordinator) Mike Nolan is going to bring, you need a guy that has that lateral ability to chase the ballcarrier down but also in passing situations he can get up the field and push the pocket realizing that you’ve got DeMarcus Lawrence coming off the end.”

“This man is a touchdown machine that will do well with Ben Roethlisberger and that receiving group,” former NFL star receiver Michael Irvin said on ESPN’s draft telecast.

“A big part of that was confidence, being put in that situation, knowing you can make those plays,” he said. “I think that was pretty big.”

Claypool raised eyebrows at the NFL combine, covering the 40-yard dash in 4.42 seconds. He joined former Detroit star Calvin Johnson as the only receivers measuring six foot four and 235 pounds or bigger to run under 4.45 seconds at the combine.

Notre Dame head coach Brian Kelly tweeted the Steelers are getting “a steal.”

“He is going to make an immediate impact on offence and special teams and will continue the legacy he started at Notre Dame,” Kelly wrote.

Gallimore also impressed at the NFL combine with a 40-yard dash time of 4.79 seconds, becoming just the third 300-plus pound player to run that fast. He also recorded 23 reps in the 225-pound bench press.

Both Claypool and Gallimore had been pegged as late first-round NFL picks in various mock drafts. They were also among 58 prospects who were invited to participate virtually in the proceedings Thursday (first round) and Friday (second and third rounds).

Draft gurus Mel Kiper Jr. and Daniel Jeremiah saw both as Friday selections. The draft wraps up Saturday with the final four rounds.

Pittsburgh (8-8) missed the playoffs last year after finishing second in the AFC North. Veteran quarterback Roethlisberger, 38, missed most of the season with an elbow injury.

“What a great pickup with Ben Roethlisberger coming back to expand on that receiving group that they have,” Irvin said when discussing Claypool.

“When you look at this team, they’re built around so many different things,” Warner said. “They’re good up front on defence, they’ve got the secondary, they’ve go the offensive line and so I love that they add another weapon on the outside.

“Some good, young receivers to build around JuJu Smith-Schuster. Big Ben is going to be happy. He gets healthy, I like where Pittsburgh is at.”

The addition of Claypool certainly gives Pittsburgh plenty of offensive options. He could combine with Jones-Schuster, James Washington and Diontae Johnson to give the Steelers four young, solid receivers on the field at one time.

Having Claypool and new tight end Eric Ebron (six foot four, 253 pounds) also gives the Steelers two big red-zone targets. Last year, Pittsburgh was last overall in red-zone TD production (35 per cent) and the NFL’s only team not to score 30 or more points in a game.

Claypool gives Pittsburgh versatility as he could play at either receiver or tight end. He also follows a trend for the Steelers, who took receivers in the second round in 2017 (Smith-Schuster) and ‘18 (Washington) before selecting Johnson in the third round last year. 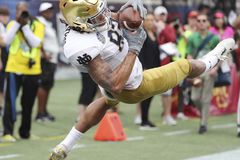 LSU’s Joe Burrow is the one constant in an unprecedented NFL draft
April 24, 2020 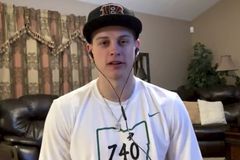