It goes down as a win but feels like anything but for Nick Arbuckle.

Arbuckle threw a touchdown pass and ran in for a TD himself as the Toronto Argonauts held on for a wild 17-16 victory over the Hamilton Tiger-Cats on Friday night.

Hamilton got the ball at the Toronto 50-yard line with 2:23 left in the fourth quarter after a Cariel Brooks interception. The Ticats scored on Sean Thomas Erlington’s 20-yard run less than a minute later but Michael Domagala’s tying convert attempt hit the upright.

“Overall I feel like me and the offence just did not play well enough to win in the second half,” Arbuckle said. “It feels like a loss almost for me.

“That interception I threw at the end, that’s going to sit with me for the next 24 hours, for sure. I was trying to throw the ball away and I didn’t even get it to the sideline. Like, who does that? There were a lot of plays we left out there on offence.”

After the touchdown, Toronto took the ball to midfield with 25 seconds remaining and punted. The Ticats took over at their 18-yard line with 13 seconds left but only got as far the Argos’ 45-yard line as time expired.

“An ugly win is a good win regardless,” said Toronto running back John White IV, who rushed for a game-high 84 yards on 12 carries. “The football gods were looking out for us ... we definitely were on the edge of our seats.”

Arbuckle staked Toronto to a 14-7 halftime advantage but the home team deserved better. The Argos held the ball for over 18 minutes and accumulated 217 offensive yards (compared to 154 yards for Hamilton).

Arbuckle had Toronto at the Hamilton 16-yard line in the second quarter but was intercepted in the end zone by the Ticats’ Tunde Adeleke.

“I’ll take any win at this point in the year,” Toronto head coach Ryan Dinwiddie said. “Bad win, good win, it is what it is but we’ll learn from it.

“We know we have to be better. The players were upset when I got (into locker-room) ... I think those guys know we left a lot on the field and we were pretty sloppy. We’re not happy with our performance at all.”

Toronto (3-2) earned the narrow victory just four days after dropping a 32-19 decision to Hamilton (2-3) on Labour Day. The Argos improved to 2-0 at BMO Field this season while the Ticats suffered their first loss in three games.

Hamilton finished with Dave Watford at quarterback as starter Dane Evans remained on the sidelines when the Ticats’ offence came on the field with under six minutes remaining. Evans, who threw for 248 yards and two TDs on Labour Day, finished 19-of-27 passing for 192 yards with a touchdown and interception.

“When I tried to stand up, man, it started to hurt,” said Evans, adding he wasn’t exactly sure about the nature of the injury. “I tried to throw on the sideline [but] it wasn’t happening.

Watford finished 6-of-10 passing for 78 yards. Arbuckle completed 23-of-37 attempts for 236 yards with a TD and two interceptions.

Papi White had Hamilton’s other touchdown. Domagala added a convert and field goal while also punting as incumbent Joel Whitford (groin) was injured before the game.

Domagala’s 28-yard field goal at 4:23 of the fourth pulled Hamilton to within 17-10. It came after Evans’s 19-yard run left the Ticats a yard short of a first down to effectively end a 60-yard, 11-play march.

The Ticats had a solid chance to cut into Toronto’s lead after Valentin Gnahoua’s deflection of Bede’s punt and ensuing no-yards penalty put them at the Toronto 51-yard line. But an incompletion and Shawn Oakman’s sack of Evans for a five-yard loss forced the punt.

Arbuckle opened the scoring with a one-yard TD run at 13:02 of the first to cap a 10-play, 54-yard march. It was aided by a successful challenge that turned an incompletion into a pass-interference call on Hamilton’s Kameron Kelly that put Toronto at the Ticats’ one-yard line.

And it marked the first time in three games that Hamilton had trailed on the scoreboard. 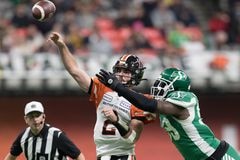 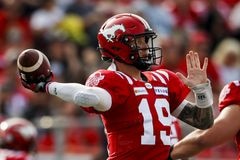 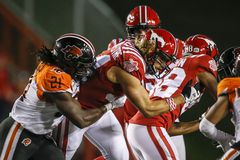