The commissioner of the CFL came under sharp questioning from a House of Commons committee on Thursday for his request of up to $150-million in assistance from the federal government, even as he said that he believes the 2020 season will be cancelled because of the COVID-19 pandemic.

“Our best-case scenario for this year is a drastically truncated season,” Randy Ambrosie told the standing committee on finance, appearing via a video link. “And our most likely scenario is no season at all.”

“The CFL is a valuable and integral part of Canadian life. Its future is very much in jeopardy. And it would be terribly sad if this pandemic was able to take it away from us.”

Ambrosie made the appearance in an attempt to clear the air after a week of blowback from the public following the revelation that the league, whose teams include owners that are among some of Canada’s wealthiest individuals, had asked for a government bailout. He told the committee that the “spirit and substance of our ask to the federal government has been obscured somewhat by the power of a headline."

The league is “currently operating on the money our fans and, to a lesser extent, our broadcasters and sponsors, pay us in advance for games," he told the committee. If the season were to be cancelled and the league forced to return the cash, “our financial crisis will become very real and very big.”

And Ambrosie hinted for the first time that the $150-million was intended to help the league respond to the possible cancellation of both the 2020 and 2021 seasons, telling the committee “we would need [the money] over the next two years, if the most negative scenarios, all of them, come true.”

But he was chastised by members of the committee for not including the CFL Players’ Association in his proposal, and for framing the request as a “partnership with government” rather than a bailout. One MP from Saskatoon, who described himself as a longtime Saskatchewan Roughriders fan, told Ambrosie there was serious skepticism in his home province – a stronghold of CFL support – toward the proposal from the league and some of its billionaire owners.

MP Kevin Waugh, a former TV sports journalist who represents the riding of Saskatoon-Grasswood, reminded Ambrosie that the CFL’s three community-owned teams – the Winnipeg Blue Bombers, the Edmonton Eskimos and the Roughriders – collectively made a profit of almost $7-million in 2018, the last year for which figures are available. “The rest are privately owned ... big, deep pockets."

He told Ambrosie that he conducted a poll yesterday among his constituents – “and take this really seriously, the province of Saskatchewan bleeds green,” he said, referring to the province’s love of the Riders – in which the respondents “overwhelmingly, they did not want any support to the CFL.”

Adding that the CFL teams collectively "lose between $10-million and $20-million a season,” Ambrosie told Waugh that the private owners, whom he dubbed “sports philanthropists” had invested “not for the sake of a great return, but really have invested in Canada and Canadian culture and Canadian sport.”

“But there’s a limit to the amount of support they’re prepared to give, that their families are prepared to give, and the real issue is that this crisis is essentially going to quadruple or more the financial losses that our teams will take in a season that could potentially be lost altogether."

Ambrosie added that, while the three community-owned teams had been in the black in 2018, revenue “are going to be dramatically different in 2020,” and that even those teams “are going to suffer significant losses that are going to be hard to recover from.”

Ambrosie’s appearance came as a new poll was released suggesting strong resistance among Canadians to the prospect of attending a live sports event as early as this fall. The poll, conducted by the Angus-Reid Institute, found 32 per cent of Canadians would “definitely avoid” going to a game featuring their favourite team this October or November, even if they were given free tickets. Forty per cent told pollsters they would “probably go but would think twice about it.” Another 28 per cent said they would be fine with it. Opinion
CFL’s Ambrosie is riding on a smile and a shoeshine (and hoping for a handout)
May 4, 2020 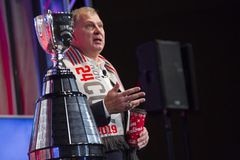 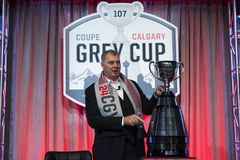