The Hamilton Tiger-Cats head into an important four-game stretch after their first of two bye weeks.

The East Division-leading Ticats (9-2) visit the Calgary Stampeders (7-4) on Saturday in the first of four straight games against West Division clubs. Hamilton will also play Edmonton (6-6) and the Winnipeg Blue Bombers (9-3) before returning to Tim Hortons Field to play host to the Eskimos on Oct. 4.

Hamilton is a solid 5-1 against West Division rivals this season. But the Stampeders are 2-0 with reigning CFL and Grey Cup MVP Bo Levi Mitchell back in the lineup and coming off a Labour Day sweep of Edmonton.

Edmonton has dropped three straight but remains 4-2 at Commonwealth Stadium. And West Division-leading Winnipeg is a stellar 6-0 at IG Field.

The Ticats, under first-year head coach Orlondo Steinauer, are 3-2 on the road and 6-0 at Tim Hortons Field. Hamilton will have its final bye week after the home game against Edmonton, then finish up against division rivals Ottawa, Montreal and Toronto.

The Ticats can’t afford to stumble with second-place Montreal (6-4) just four points behind. But unlike the Ticats, the Alouettes won’t have another bye week. After visiting Saskatchewan on Saturday, they’ll face Winnipeg (twice), the BC Lions, Calgary, Toronto, Hamilton and Ottawa.

The Toronto Argonauts ended two rather embarrassing streaks on Saturday in their 46-17 win over the Ottawa Redblacks.

The victory was Toronto’s first on the road since a 40-13 decision against the BC Lions on Nov. 4, 2017 – a span of 15 contests. The Argos (2-9) were 0-9 away from BMO Field last season and had dropped their first five road contests this season.

The Argos also scored their first rushing touchdowns of 2019. Derel Walker had a one-yard TD run in the first quarter before James Wilder Jr. scored on a five-yard effort in the fourth.

Wilder Jr. finished with 42 yards rushing and the TD on eight carries while adding three catches for 45 yards and two touchdowns. Toronto still remains last over all in rushing scores, three behind eighth-place Ottawa.

Quarterback McLeod Bethel-Thompson threw for 411 yards and three TDs against Ottawa. It’s the seventh time this season Bethel-Thompson has surpassed the 300-yard passing plateau and marked his second 400-yard performance after throwing for 464 yards in Toronto’s 28-22 loss to Montreal on Aug. 25 in Moncton.

When the Winnipeg Blue Bombers come off the bye next week, they’ll have their offensive linchpin back.

Running back Andrew Harris can return to the lineup on Sept. 21 when the Bombers (9-3) visit the Alouettes (6-4). Harris missed Winnipeg’s Labour Day split with Saskatchewan while serving a two-game suspension after a positive drug-test result.

Despite the two-game absence, Harris remains the CFL rushing leader with 908 yards. The 32-year-old Winnipeg native has a 93-yard advantage over Edmonton’s C.J. Gable, with the Eskimos also on a bye week.

Montreal’s William Stanback is third with 689 yards heading into the Alouettes’ road game Saturday against Saskatchewan (7-4).

Winnipeg’s rushing attack didn’t suffer much without Harris. Johnny Augustine ran for 173 yards on 28 carries (6.17-yard average) in the two games against Saskatchewan.

Chris Streveler remains at quarterback for Winnipeg with incumbent Matt Nichols (upper-body) on the six-game injured list. The Bombers are 2-1 with Streveler under centre.

GROUND TO MAKE UP

Brandon Banks headed into Hamilton’s bye week leading the CFL in receiving, but returns standing third over all.

Banks had 10 catches for 109 yards in Hamilton’s 38-27 home win over Toronto on Sept. 2. That put Banks atop the receiving standings with 65 receptions – one behind teammate Bralon Addison for most in the CFL – for a league-high 862 yards with five TDs.

But after last weekend’s action, Calgary’s Reggie Begelton leads with 66 catches for 930 yards with seven TDs. Toronto’s Walker climbed into second with 52 receptions for 897 yards and five TDs.

On Saturday, the CFL issued a tweet outlining Begelton had become its leading receiver. That prompted a response on Twitter from Banks, stating: “Guess they broadcast it when I’m on a bye week they don’t let it be known week to week that I’m in lead it’s cool tho end of season will prove it.”

Edmonton selected the former Laval standout No. 3 over all in this year’s CFL draft, but he signed as an undrafted free agent with the Chicago Bears. Betts was among the NFL club’s final cuts.

Also on Monday, veteran running back Tyrell Sutton was among four players the Tiger-Cats added to their practice roster. Sutton, 32, has previous CFL playing experience with Montreal (2013-18) and B.C. (2018), having rushed for 3,841 yards on 698 carries (5.5-yard average) with 17 TDs while adding 178 catches for 1,539 yards and three touchdowns.

The 5-foot-9, 217-pound Sutton began the season with Toronto but was released July 10.

Meanwhile, the BC Lions added five players to their practice squad, including Canadian offensive lineman Josiah St. John. The native of Ajax, Ont., was taken first over all by Saskatchewan in the 2016 CFL draft out of the University of Oklahoma.

St. John spent three seasons with Saskatchewan before signing in the off-season as a free agent with Toronto. He was among the Argos’ final cuts. 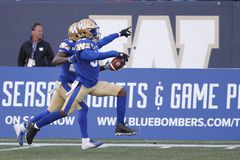 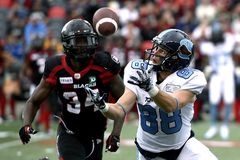 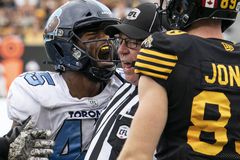