Scott Milanovich is returning to the CFL with the task of turning around an Edmonton Eskimos franchise that is storied in history but short on recent results.

Edmonton announced Milanovich as the 22nd head coach in the CFL club’s history in a news release Thursday.

Milanovich will arrive in Edmonton with three Grey Cup titles under his belt – one as head coach of the Toronto Argonauts (2012) and two as assistant head coach and offensive co-ordinator with the Montreal Alouettes (2009, 2010).

The Eskimos hope that pedigree will translate into hardware for a club that has won 14 Grey Cup titles, but just one in the past 14 seasons.

“I am honoured and humbled for the opportunity to lead the Edmonton Eskimos, one of the Canadian Football League’s most historic franchises, as the head coach beginning in January,” Milanovich said in a statement. “[President and CEO] Chris Presson and [general manager] Brock Sunderland have an amazing vision for the organization, and I’m grateful for their trust and confidence in me.

“I look forward to assembling a coaching staff that will work tirelessly every day to make our fans and the people of Edmonton proud of what the Esks represent to the community.”

The Eskimos said Milanovich will finish his season as quarterbacks coach with the NFL’s Jacksonville Jaguars, where he has been since 2017. A teleconference to introduce Milanovich was scheduled for Saturday.

Maas, who was a quarterbacks coach in Toronto under Milanovich from 2012-14, is now Saskatchewan’s offensive co-ordinator.

The 46-year-old Milanovich broke onto the CFL coaching scene in 2003, when he closed the season as Calgary’s quarterbacks coach after playing six games at the position with the team.

After spending the next three seasons coaching in NFL Europe, he joined the Alouettes in 2007 as quarterbacks coach. He added offensive co-ordinator to his title the next year and took on assistant head coach duties in 2009, helping Marc Trestman’s Alouettes win back-to-back Grey Cups in 2009 and 2010 and developing a successful relationship with star quarterback Anthony Calvillo.

He was hired by the Argonauts as head coach in 2012 to replace Jim Barker, who remained with the team as general manager.

With another star quarterback at his disposal in Ricky Ray – who was acquired by Barker from Edmonton in an off-season trade – Milanovich led the Argonauts to the 2012 Grey Cup title in his first season as a CFL head coach, earning the Annis Stukus Trophy as CFL coach of the year in the process.

The Argonauts failed to win another playoff game over his next four seasons at the helm, and he departed for Jacksonville after the 2016 season. He compiled a 43-47 record over five seasons with the Argos.

In Edmonton, Milanovich will be paired with another promising quarterback in Trevor Harris. The Eskimos hope Milanovich can have the same success with Harris as he had with Calvillo and Ray. Calvillo was twice named the CFL’s Most Outstanding Player under Milanovich (2008, 2009), and Ray set numerous club and league records under Milanovich’s watch.

“Scott has a wealth of football knowledge and is a great leader who is a proven winner. He is renowned for his ability to develop and get the best out of quarterbacks. After an exhaustive search, we know Scott is the right man to lead our franchise,” Sunderland said in a statement. 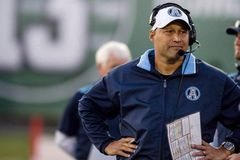 Milanovich resigns as Toronto Argonauts head coach to join Jacksonville Jaguars
January 27, 2017
Report an error
Due to technical reasons, we have temporarily removed commenting from our articles. We hope to have this fixed soon. Thank you for your patience. If you are looking to give feedback on our new site, please send it along to feedback@globeandmail.com. If you want to write a letter to the editor, please forward to letters@globeandmail.com.
Comments