The Hamilton Tiger-Cats are close to accomplishing something no team from the CFL’s East Division has done in a decade: finish the regular season as the best squad in the league.

Don’t look now, but the Tiger-Cats are a CFL-best 12-3 in mid October. With three games left on their schedule, they have a chance to end a 10-year streak of West Division teams topping the league standing.

It is enough to inspire hope in Hamilton, a city that hasn’t won a Grey Cup since 1999. Perhaps most impressively, the Ticats are persevering without star quarterback Jeremiah Masoli.

For five of the previous six seasons, the Calgary Stampeders finished with the best regular-season record. The last team from the East to finish with the year’s finest regular season was Anthony Calvillo’s dominant 2009 Montreal Alouettes, who went 15-3 and went on to win the Grey Cup.

The 2019 Ticats are a perfect 7-0 at home. Before this weekend’s games, they led the CFL in most points scored (459) and fewest points allowed (288). The Tabbies are 8-2 against West opponents – including wins over all five teams and series sweeps of B.C., Winnipeg and Edmonton.

This is Hamilton’s first 12-win season since 1998 and it has already matched a franchise record, with games against Ottawa, Montreal and Toronto still to go in a division in which it holds a 4-1 record. A few teams could still catch the Ticats for the CFL’s best record, led by West-leading Saskatchewan. If the Ticats clinch the East, they get a bye into the division final, which would be in Hamilton on Nov. 17.

You could be forgiven if you didn’t seen this coming for Hamilton. It has had only had two winning seasons in the past decade – 10-8 finishes in 2015 and 2013.

A string of events early this season could easily have derailed the team. Offensive co-ordinator June Jones left for another job just days before camp, leaving rookie head coach Orlondo Steinauer to quickly replace him with Tommy Condell. Starting Canadian running back Sean Thomas-Erlington suffered a knee injury just four weeks into his breakout CFL season. Veteran receiver Luke Tasker was in and out of the lineup with injuries. Then Masoli’s season ended in the team’s sixth game, when he planted awkwardly while eluding a defensive tackle in the pocket and tore the anterior-cruciate ligament in his left knee.

Masoli had the Ticats off to an exciting 4-1 start when it happened. The 31-year-old was in the thick of following up a 2018 campaign in which he got the nod as the East’s candidate for the CFL’s most-outstanding-player award. Then suddenly, less than a third of the way through his season, Masoli was headed for knee surgery and he was scratched from the team’s plans for the year.

“It was a huge blow. Jeremiah was the leader of our team,” Steinauer said this week by telephone as his Ticats enjoyed a bye. “It was a classic case of things not going to the original plan. So how do you adjust mid-stream at a professional level? That’s a credit to our coaching staff. Our players bought in to what we were selling – everyone has to be ready to play all the time, because things can happen in an instant.”

With their franchise pivot unable to play another down, the Ticats’ fate rested with 25-year-old backup quarterback Dane Evans, a native of Sanger, Tex. who had just a handful of CFL appearances to his résumé. The University of Tulsa product had entered the NFL draft in 2017, but didn’t get selected. He got a shot in a Philadelphia Eagles training camp, but they released him that preseason. He then signed with the Ticats and had been kicking around as a backup in Hamilton since, perhaps upstaged by the brief hoopla surrounding the 2018 CFL stop-through by Johnny Manziel.

Evans did have a vaguely familiar experience from which to draw. During his redshirt freshman year at Tulsa, the starting quarterback suffered an injury that was to sideline him for two games. Evans started those two college games and played well enough to keep the job even after the starter got healthy. He remained Tulsa’s starting QB all the way through his senior year.

Evans took over for Masoli during Hamilton’s July 26 game against Winnipeg. The Ticats won. Since then, the new pivot with red facial hair peeking out from his facemask has gone 7-2 as the Tabbies’ starter.

Sometimes the Ticats have leaned on a committee of running backs in Sean Thomas-Erlington’s absence, including Maleek Irons, Cameron Marshall, Bralon Addison and Tyrell Sutton. Other times, they have spread the field wide and let Evans throw it all over, especially to targets such as Addison and Brandon Banks, who each have more than 1,100 yards receiving. The Ticats didn’t need to adjust too much without Masoli. They could call many of the same plays.

“Dane had put in the work last year on scout team and he was still here for a reason. He’s a natural leader who is so easy to follow because he’s really authentic,” Steinauer said. “We let Dane grow at his own pace and we didn’t compare him to Jeremiah. We let him play through mistakes. He could make all the throws, but there were fine fixtures and footwork that he and Tommy worked hard on. The biggest box Dane is checking is that we’re winning.”

After a few weeks of recovery from surgery, Masoli has come back to the team in a supporting role. Still wearing a knee brace, he is in meetings and picks his spots to use his respected voice. Evans says the two men still room together on the road, as they did before Masoli got hurt.

“We talk about the game plans in our room. It’s very good for me to have a guy who has been there,” Evans said by phone from California where he spent the bye week. “We bounce ideas off each other and he doesn’t withhold anything. I was actually excited to watch him [play] all season and that all changed in the blink of an eye. I still don’t want to overstep my boundaries, even though now it is my job to go give my team the best chance to win. I know it’s really tough on him, but he’s being the ultimate teammate right now. I can attest to that first-hand.”

Hamilton’s defence and special teams have been stout, even as the offence worked in its new starter. Linebacker Simoni Lawrence tops the CFL in total tackles (83, despite missing two games because of suspensions for illegal hits) – including 17 tackles in Week 16, a CFL single-game record. Defensive end Ja’Gared Davis is second in sacks (12). The Ticats rank No. 1 in big-play returns with 19, flanked by Frankie Williams and his CFL-leading 786 kick-return yards.

Evans has picked up steam with time, improving his accuracy and cutting down on his ratio of touchdowns to interceptions. He and Addison were both chosen as the CFL’s top performers for the month of September.

The 1999 Grey Cup-champion Ticats were honoured in Hamilton before the team went on to trounce Edmonton 42-12 last week. One of the defensive stars of that ’99 team, Rob Hitchcock, had his name added to the Wall of Fame at Tim Hortons Field. He and his championship teammates met with the current Ticats that night. Together, they watched video highlights of that memorable Tiger-Cats squad, one on which Steinauer had been a standout defensive back.

“So we saw Coach O in this video, making interceptions and knocking people around. It was so cool to see that such a humble guy had such a huge role on that ’99 team,” said Evans, who admits he watched a few CFL games on ESPN as a teen, but didn’t follow the league avidly before coming to Canada. “Coach never toots his own horn; he just works. Our team is like that, too.”

The Ticats were in the Grey Cup in 2013 and 2014. Both were losses – first to Saskatchewan, and then to Calgary. Some players from those teams remain, including Lawrence, Banks and veteran Canadian linemen such as Mike Filer on offence and Ted Laurent on defence. Steinauer had been a defensive co-ordinator for those teams.

Going into this season, Steinauer was also pursued by B.C. and Toronto to fill their head-coaching positions. Hamilton head coach last season – June Jones – agreed last December to move over and be the offensive co-ordinator if Steinauer would remain with the Ticats and become head coach. The gesture humbled 45-year-old Steinauer. (Later, in May, Jones left the Ticats to become head coach and general manager of the Houston franchise in the reborn XFL).

“I know the city of Hamilton wants a team with a tough blue-collar mentality and I’m really grateful for the opportunity to lead,” Steinauer said.

Ticats fans have watched seven of the nine CFL teams win the Grey Cup since their team last hoisted it in 1999. Evans has only been in Canada since 2017, but he has quickly become accustomed to Hamilton’s passionate fans. Watching the ’99 champs get recognized served as a reminder of how much the Ticats faithful crave the Cup.

“For sure, fans who come to our games are loyal and loud. They have filled our stadium no matter what our record was,” Evans said. “They’ve gone a long time without a Grey Cup, so we owe them one.” 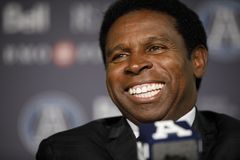 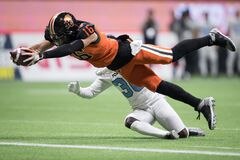