“Trump begged them not to cancel the season,” said a source with knowledge of the call, according to Vanity Fair.

The season doesn’t start for six months. One presumes this should be a little further down the to-do list of America’s de facto chief medical officer.

But if the U.S. President is wrong about a lot of things, he’s got this one right. The NFL is America, or is in the imagination of a great many Americans.

The NFL is to America what other, far more vital institutions used to be. It’s solid. It’s permanent. It carries on.

Because it isn’t currently playing, the NFL has been free to continue performing this function in recent days. Its free-agency window just opened and the league has been churning up storylines to distract the fearful.

Did you hear the Texans traded DeAndre Hopkins? You didn’t?

Do you know who DeAndre Hopkins is? You don’t?

Are you familiar with the Texans? You are? Great.

Wait. You think I mean the people from the big state at the bottom, don’t you? Then you are not familiar.

That doesn’t matter. The Texans traded him. Take a minute to think about that. Because during that minute, you will not be thinking about the fact that your home is not vacuum-sealed and never will be.

Canada doesn’t care about DeAndre Hopkins the way the United States does – thank God – but we can pretend for the sake of good manners.

Then you can go back to planning your future reno – spiff up the bathroom, replace the dishwasher, convert the living room into a storage space for 40 crates of hand sanitizer.

The Hopkins trade dominated a tiny part of the news cycle for a short time. If you’re an NFL fan, that may have briefly stopped the buzzing in the back of your head.

Then someone you don’t know who was in a movie you haven’t heard of announced they were going into self-isolation – Look at me! I’ve got a mask with hearts on it and a cute dog! Subscribe to my YouTube channel! – and the buzz returned.

By Monday night, the dark thoughts had resumed control and you could not stop yourself from anxiety-watching Love is Blind for the fourth time. That idiotic show gives you relief because as bad as things get, it is still worse to be Mark or Jessica.

Then Tom Brady swaggered onto the news stage.

It’s always been hard to credit Brady with much brains. Despite years of opportunity to do so, he’s never said a single interesting thing. His emotional meter appears to operate on a bandwidth between “Tom happy” and “Tom sad.” It’s hard to tell the difference.

But in this crucial instance, Brady has instinctively understood what America needs from its athletes. It’s not leadership – because I don’t need another iPhone video message from a pro telling me to stay isolated. I’m doing that. If you must tell me something, tell me where to find eggs.

What America (and Canada by extension) needs from its athletes is that they stick to dumb, athletic things, minus the actual athletics.

On Tuesday morning, Brady announced on social media that he is leaving the New England Patriots.

Since this is Brady we’re talking about – a man who thirsts for attention as you do for the orange juice you totally forgot to buy as you were cleaning Costco out of paper towels, as though those are doing you any good – he couldn’t quit his job like a normal person.

Instead, he posted a long thank you to the Patriots, its owner, his teammates, the people of Boston and the guy who schedules the round-the-clock shifts of his many, many pool cleaners.

It goes on and on with thank yous and blessings and heartfelt this and that, and skips over the obvious point – the part where he says he’s leaving. It’s endless and confusing. It’s the thank-you card you receive after going to Samuel Beckett’s wedding.

There’s a type of genius at work here. Brady has stage-managed his departure for maximum dramatic effect. Why the mystery? How did this go down? Where is he headed? Could this be a prelude to retirement?

Find out in Act II, whenever that is.

Do you care about any of this? Like, care care. I hope not. It doesn’t matter.

But it is nice to think about something other than the new usual for a few minutes. To picture this future world in which something so facile and meaningless – What part of America will Tom Brady be in when he adds a zero to his net worth? – seems vaguely important again.

The thing we’ve always said to each other whenever our sense of order hits a greasy spot on the road of history is that “life goes on.” Right now, that isn’t cutting it.

Life will go on. We just don’t know exactly how it will do so. That buzzing is not fear, precisely. It’s existential dread. The fortunate among us are confronting it for the first time.

But Tom Brady – square jawed, block headed, impermeable to real life – hears no buzzing. His mind is clear as a bell (possibly because he last ate refined sugar in 2004).

He isn’t a hero we need (and we need plenty). But he’s one it’s still okay to want. 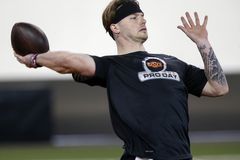 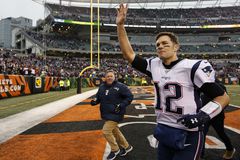 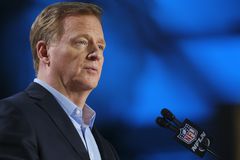